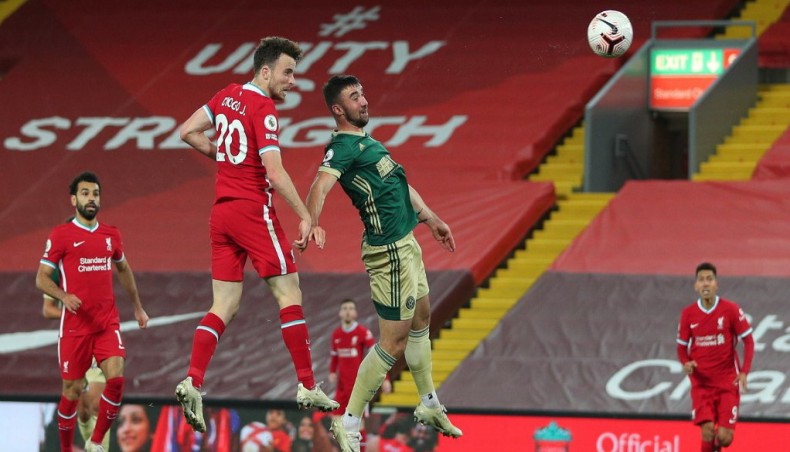 Liverpool came from behind to beat Sheffield United and join Everton at the top of the Premier League table on Saturday after Manchester City squandered more points in the topsy-turvy English top-flight.

Jurgen Klopp's champions, without injured defensive talisman Virgil van Dijk, started their match at Anfield unbeaten in their past 61 Premier League home games but fell behind to an early penalty scored by Sander Berge.

Roberto Firmino hauled them level shortly before half-time and the home side overcame the disappointment of seeing an audacious Mohamed Salah goal ruled out for offside to score the winner through a Diogo Jota header.

The victory at Anfield means the champions have 13 points, level with neighbours Everton, who still lead the table on goal difference, with a game in hand.

In the day's opening match, Phil Foden rescued a 1-1 draw for City at the London Stadium but the disappointing result means Pep Guardiola's team have taken just five points from their past four matches.

They are already five points behind Everton, who play Southampton on Sunday, and look more vulnerable than at any time since Guardiola's first season in charge.

West Ham went ahead against the run of play in the first half through Michail Antonio's superb overhead kick from Vladimir Coufal's cross.

But the visitors could not turn their dominance into goals, with West Ham indebted to Lukasz Fabianski, who produced some vital late saves.

A frustrated Guardiola said City were struggling with injuries and a hectic schedule.

‘I would prefer to have results but we have to analyse where we are,’ he said. ‘Many injuries, a lack of preparation, no recovery time, and tough games we've played so far.

‘But the players gave everything on the pitch. Now we recover and think about the next game.’

There could be more grim injury news for Guardiola, who said Argentine forward Sergio Aguero, who only last week returned after a long lay-off, had picked up a suspected hamstring injury.

Edinson Cavani made his debut for Manchester United against big-spending Chelsea but the teams cancelled each other out in a 0-0 draw on a night of torrential rain at Old Trafford.

United's previous two Premier League home games this season resulted in a 9-2 aggregate scoreline against them in defeats by Crystal Palace and Spurs.

Marcus Rashford came close to breaking the deadlock but Cesar Azpilicueta had a strong penalty appeal rejected when Harry Maguire wrestled him down at a Chelsea set-piece.

The result means United have failed to win any of their opening three home league games in a season for the first time since 1972/73.

‘We miss the fans, I must say,’ Solskjaer told Sky Sports. ‘It is the same for all teams but I think everyone agrees that the edge has gone and I can't wait to get the fans back.

‘But I thought we were closest to winning the game, we kept a clean sheet and we have stopped the run of home defeats, although we wanted to win of course. I think it is a very good, solid week for us with two wins and a draw.’

Chelsea boss Frank Lampard felt his side should have been awarded a penalty.

‘Without doubt it is a clear penalty. It's not always clear for the referee but the VAR is there. Maguire got Azpilicueta in a headlock,’ he said.

Earlier, goals from Jairo Riedewald and Wilfried Zaha in a 2-1 win for Crystal Palace condemned promoted Fulham to their fifth defeat in six matches.