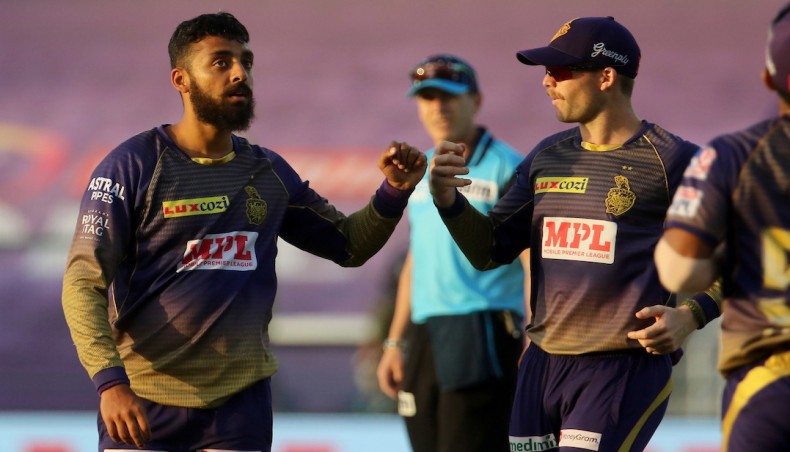 Chakravarthy returned impressive figures of 5-20 from his four overs to help Eoin Morgan's KKR restrict Delhi to 135 for nine in their chase of 195 in Abu Dhabi.

Nitish Rana, who top-scored with 81, and returning all-rounder Sunil Narine, who hit a 32-ball 64, put on a key 115-run fourth-wicket stand to guide Kolkata to 194 for six after being put in to bat first.

Morgan was all praise for Narine, who played his first game after being cleared of having a suspect bowling action.

It was his team's sixth win in 11 games to stay fourth in the eight-team table.

‘Great of Sunil to come back and play as a proper all-rounder. And Nitish Rana and him adding all the runs,’ said Morgan.

‘The decision to bat Narine there (at number five) is all the coach (Brendon McCullum). He likes to play his cards. It is all Brendon.’

On Chakravarthy's mystery spin, Morgan told reporters: ‘He has been one of the positive stories out of our campaign so far.

‘Up until today we felt we haven't played our best cricket but today I think we were close to that.’

The 29-year-old Chakravarthy ran through high-flying Delhi, who stay on 14 points, behind table-toppers Mumbai Indians on net run-rate, despite a threatening 63-run partnership between skipper Shreyas Iyer and Rishabh Pant.

Chakravarthy broke the stand with the wicket of Pant, for 27, in his first over and then struck twice in successive deliveries to send back Shimron Hetmyer and Iyer, for 47, to dent Delhi's chase.

It was an impressive bounce-back victory for KKR, after struggling to 84-8 in an eight-wicket thrashing by Royal Challengers Bangalore on Wednesday.

Narine bowled four overs after being taken off the warning list for suspect bowlers following his action being reported in a game on October 10. He conceded 37 runs without taking a wicket.