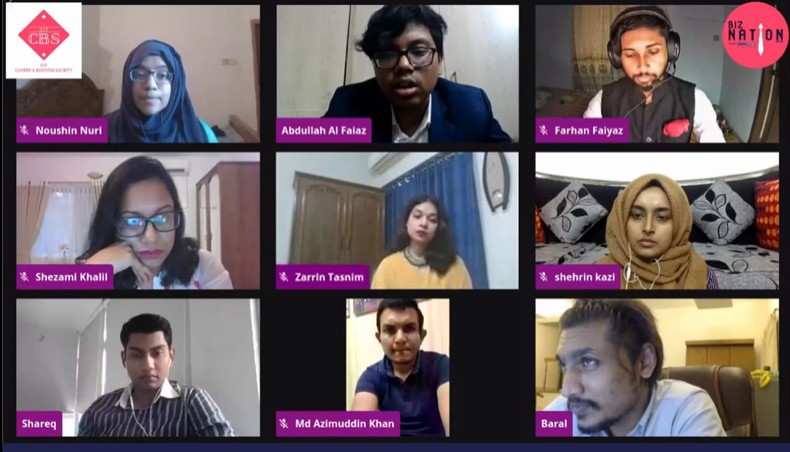 A moment during one of many online meetings.

The journey for the business case competition started in February 2020 and got an overwhelming response from more than 200 teams coming from 25 plus universities. After conducting the online round the event had to be postponed due to the pandemic situation.

Even though the global situation posed a great threat to the on-going competition, it didn’t take long for the organising committee to conduct the remaining rounds online. On September 18 they resumed the event by hosting the second round virtually and selected the best 16 for the Semi-final.

The grand finale was executed virtually and was broadcasted live on Facebook. The top six groups, who advanced toward the finale, were Team Horse of Helios, Team Ruff Bandit, Team Blue Dream, Team Ramen, Team Extra Drill and Team Mudblood. The teams were from Dhaka University and Bangladesh University of Professionals.

They leapt over the hurdles of the previous rounds and presented their unique ideas on an even more unique yet relevant issue in the finale. In the grand finale, the top six teams had to fight vigorously because all of the team were outstanding. The most interesting part of the finale was the question-answer section. Finalists had to go through some really difficult questions in that particular section.

The champion team was Team Ruff Bandit from Dhaka University IBA, the first runner-up and the second runner-ups were Team Ramen and Team Horse of Helios respectively.

In the initial phase of the grand finale, they shared their experience and knowledge about business and the corporate world.

The whole event was organised by IUT Career and Business Society, a student-run platform that started their journey in the business arena of Bangladesh in 2017. IUT CBS are always kin to give students a plethora of room for growth for the professional world that lies ahead of them. And Biznation is the same kind of room which will give students to think broadly and find the best solution. Without the dedication and hard work of the members of IUT CBS it would have been impossible to successfully finish an event of such calibre.

Biznation believes that only theoretical education doesn’t let the future white collars to hone and try out their skills and provide the direction they need to work under stress and as a team.

Farhan Faiyaz is the senior publications officer of IUT CBS.