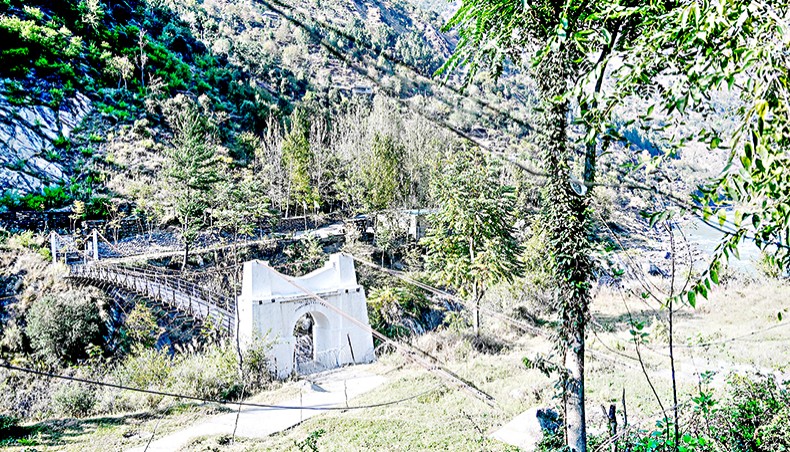 This photograph taken on October 14 shows a bridge at the Line of Control between India and Pakistan, from Tithwal village in the Kupwara district of Jammu and Kashmir. — Agence France-Presse/Money Sharma

THE National Conference led by Dr Farooq Abdullah and the People’s Democratic Party led by Mehbooba Mufti have joined hands to face the onslaught on Kashmir’s rights launched by the BJP government on August 5, 2019. On the eve of that vicious attack, these two and other political parties had come together to set up a united front to combat the dire threat to the very existence of Kashmir. A well-drafted, unanimous statement called the Gupkar Declaration was issued.

The very next day, the blow fell. Abrogation of Article 370 of India’s constitution, which supposedly guaranteed Kashmir’s autonomy and its special status, was always the BJP’s dream. The Modi regime did worse. It destroyed Kashmir’s very identity. Kashmir was now to be ruled as a centrally governed union territory along with Jammu with a lieutenant governor at the head. Ladakh was lopped off to be centrally governed. The political parties have rightly decided not to contest an election under the new set-up and thus legitimise it. What is afoot is a plan to confer supremacy on Jammu and BJP rule over Kashmir.

The assembly has 111 seats. In 2002, the status quo was frozen by law until 2026. ‘Until the relevant figures for the first census taken after the year 2026 have been published, it shall not be necessary to constitute a (delimitation) commission to determine the delimitation of the assembly constituencies.’

Ominously, the centre has set up a delimitation commission as part of its abrogation process. The entire game is unconstitutional and dishonest. Article 370 cannot be amended let alone abrogated. The centre has set at naught Kashmir’s constitution. It will have panchayat raj.

The PDP has been split by one of its former ministers, Altaf Bukhari. He is a great admirer of Bakshi Ghulam Mohammed who, in concert with Nehru, had Sheikh Abdullah removed from office as premier and imprisoned for 11 long years.

India has based its rule on several props. One is a mole in the Kashmir government. Before his arrest, prime minister Jawaharlal Nehru had marked a copy of his letter to Shaikh Sahib to Bakshi. Abdullah mentioned that to Nehru. It had no effect.

The worst of the lot was P.D. Thakur. ‘What does morality have to do with politics?’ he asked governor BK Nehru, who records in his memoirs how the Intelligence Bureau’s pouches were used to send lakhs of rupees to buy MLAs to remove Farooq Abdullah as chief minister.

India’s Intelligence Bureau was itself suborned by Vallabhbhai Patel early enough, as its director B.N. Mullick recorded in his memoirs. Unlike Nehru, Patel did not like his reports and he did as desired. Former spy chief AS Dulat writes that that the Intelligence Bureau was ‘key... to the central government’s hold on Kashmir.’

This sordid game succeeded only because the principal political elements in Kashmir were divided and fought bitterly against each other. That explains the roots of militancy. Gupkar holds out hope that Farooq Abdullah would at long last bury the hatchet and present a united front to New Delhi. After their release from imprisonment the major parties of the Gupkar conclave of August 4, 2019, met again in Srinagar at Farooq Abdullah’s residence on October 15, 2020. They decided to form an alliance called People’s Alliance for the Gupkar Declaration.

Farooq Abdullah struck a fresh note: ‘Dialogue with all the stakeholders who are involved in the problems of Jammu & Kashmir’ — ie Pakistan. He pledged to reach out to the people. Above all, Kashmir’s leaders must come out with sets of proposals; a duty they have evaded. Why not a conclave on the lines of the one Shaikh sahib convened in 1968 and 1970?

President Pervez Musharraf and prime minister Manmohan Singh had brought Kashmir to the gates of a settlement. Small minds in India, Pakistan and Kashmir wrecked it; some for personal reasons. Kashmiris were obsessed with Geelani & Co. He is now a spent force.

The red lines are: India will not accept Kashmir exercising autonomy; Pakistan will not accept the LoC as the international border; Kashmiris will not accept partition or denial of democracy. The Musharraf-Manmohan formula met all these tests in its famous four-point formula.

Domestically, the alliance must heed the needs of the common man who has suffered a lot. Its agitation must be peaceful and constitutional. Once confidence is established it must assert the fundamental rights to assemble peaceably and march in procession.

The hateful politics has harmed the poor shopkeepers. The alliance must draw up a programme for attending to the needs of the common man which the Hurriyat harmed.

It must win the confidence of the people, draw up a list of grievances and work for their redress. The test for the top leadership of Kashmir has just begun. They have acted wisely. History will not forgive them if they fall apart and fail the people.

Dawn.com, October 24. AG Noorani is an author and a lawyer based in Mumbai.