Holding on to the moral compass 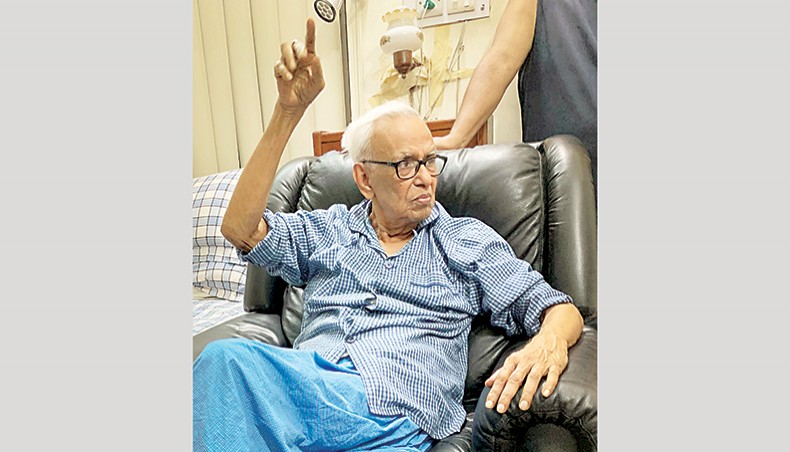 THE boat was headed North from Victoria Harbour in Hong Kong island. It was 1986, and the big outflow of Bangladeshi migrants hadn’t really begun. The last thing I expected as I headed to Kowloon was Bangla being spoken. Curious, I approached the distinguished looking gentleman and introduced myself. I had been away for twelve years and didn’t even recognise the name Rafique Ul Haque. He didn’t let on that he was a celebrated lawyer, but I had enough wits around me to work out that a Bangladeshi lawyer meeting a client in Hong Kong, had to be rather good. It was much later that I found out that the man I had been speaking to was a class friend of the former president of India Pranab Mukherjee and had stayed at the same Baker Hostel in Kolkata where Bangabandhu Sheikh Mujibur Rahman had been. I was on a judging assignment, and I introduced him to my fellow jury members, the Indian photographer Raghu Rai, the Malaysian photographer Eric Peris and Wee Beng Huat, the photo editor of the Singaporean Newspaper, The Straits Times. Neither of us knew then that he was a close family friend. His wife, Dr Farida Haque worked with my father professor Kazi Abul Monsur who was then director of the Public Health Institute. She was also his former student. Both Rafique Bhai’s family and mine were ‘doctor’ families. We had joked that had we become doctors we would have run out of patients in the family. Rafique Bhai had retained his familial leanings by establishing the Shishu Hospital, the Ad-Din Hospital and a cancer hospital that was close to completion when we last met. Having bequeathed all his property except the family home to these institutions, he had told his lawyer son, ‘I’ve given you a decent education. You earn your keep’.

He never faulted me for having failed to recognise him, but many years later, when my mother the educationist Dr Quazi Anwara Monsur, gave me a special assignment, to photograph her with the African Night Queen that had just bloomed in Rafique Bhai and Farida Apa’s house, I realised he remembered. Night is when the flower blooms, and I took my lights and my equipment, and drove Amma to Purana Paltan. Rafique Bhai was a great admirer of my parents and received us at the gate. His first comment was an aside to my mother. ‘You have a very expensive driver!’ I didn’t know how long the blooms would last, so I was hurrying to set up the lights and needed some help. In particular, I needed someone to hold the reflector exactly where I needed it. There were plenty of people around, but Rafique Bhai stepped in, grabbing the reflector from me. ‘One day, I can claim to have assisted the famous photographer Shahidul Alam’ he said with a wry smile. We laughed as we recognised the reference to my earlier Hong Kong faux pas!

While he was rarely our official lawyer, my parents would often seek his advice on serious matters. Later, when we needed a corporate lawyer on a more serious matter, Rahnuma and I went to visit Rafique Bhai. He treated Rahnuma like a new bride and we delighted in his company as he charmed us with his wit, before providing astute legal advice.

Much had happened in between. When the leaders of the nation’s two leading political parties, Shekh Hasina and Khaleda Zia, had been arrested by the military backed caretaker government, and party faithfuls of both parties were scared to go against the military, it was Rafique Bhai who represented both, pro bono. He did manage bail for them, but that didn’t stop him from critiquing both for their misdeeds. It was this even handedness that allowed him to be the one person, who has had the trust of both leaders in our hugely divided political landscape. It was this sense of balance that allowed him to be counsel for every national leader of Bangladesh, except the military backed caretaker government. He refused to take money for any of these services, drawing a symbolic one Taka salary when he became Attorney General. Instead he directed their indebtedness to the institutions he founded. Mujib had provided the land for Shishu Hospital and president Ziaur Rahman had given the seed funds of 75 lakhs. A lot of money in 1976.

When we interviewed him for my father’s biography, he received us warmly, this time taking us through family photographs. Explaining the relevance of the historic photos on the corridor. His memory was fading, but he had vivid memory of fragments, like the bumpy ride to Mohakhali in an old beetle to see my father and other memories of my dad in the old days. Of how mischievous I had been as a child.

A brilliant student, he had topped the class in criminal law at Calcutta University. While he had been president of the West Bengal Youth Congress as a student, he never entered mainstream politics. Being neither hungry for power, nor acquisition of wealth. He had drafted the nationalisation law for Mujib and subsequently, the denationalisation law for Zia. When questioned about the ethics of doing so, his response was, ‘I’m a tailor, and cut the cloth according to the client.’ His belief was in the rule of law, leaving the leaders to make the right decisions.

This was a man who had changed Indian to Pakistani nationality in London. Went over to road 32 in Dhanmondi on August 15, 1975 after Mujib’s assassination. Had drafted the banking laws of the land. He had initiated the setting up of a Mujib museum at Baker hostel in Kolkata. Yet in his chequered career, he had never caved in. When the military intelligence wanted a pre-recording of what he was going to say in Ekushey Television, he refused to appear and they relented. He provided a moral compass many of us seem to have lost.