Youths uprising across the world 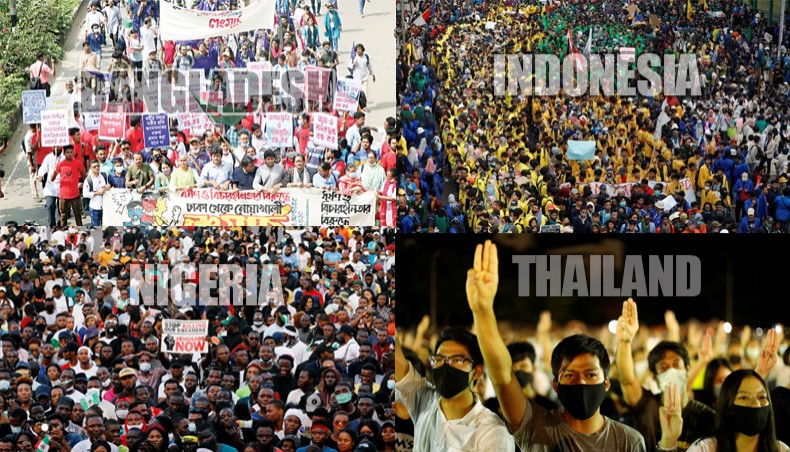 When the entire world order is shaken by the pandemic COVID-19, youths remain fearless as they organise against authorities, the system that failed them. These youth uprisings in Nigeria, Indonesia, Thailand, India and Bangladesh are the essence that is linking young people miles apart, writes Nahid Riyasad

2020 is the year of pandemic COVID-19, but it is also the year that has witnessed state repression across the world. Globally, the question of income inequality, inequitable access to health care among other structural discrimination against the marginal communities has come to fore with the pandemic outbreak of COVID-19. The systemic inaction to bring any effective change by addressing these issues properly has outraged millions. In such time of crisis, people took to the street. Youths have spearheaded protests in different parts of the world demanding a radical change in the system that approves police brutality, racial injustices and sexual violence. In the last few weeks, the world has seen fierce student protests in Nigeria, Indonesia, Thailand, India and Bangladesh and the government response, as expected, was repressive. For many, the persistent youth uprising against oppressive regimes has been the only source hope in world hit by the deadly disease, economic insecurity and hunger.

From October 7, Nigerian youths have been demonstrating against police brutality, especially against the Special Anti-Robbery Squad. The SARS had a notorious reputation among the people and young people especially loathed them for unduly profiling young people.

On October 20, Nigerian youths have faced the most brutal assault when members of law enforcement agencies opened fire on protesters in country’s most populous city Lagos.

On October 11, following fierce protests from young university students, Nigeria government dissolved Special Anti-Robbery Squad but failed to quell the protest. However, SARS was quickly replaced by the Special Weapons and Tactics team.

A report in June by Amnesty International said it documented at least 82 cases of torture, ill-treatment and extra-judicial execution by SARS between January 2017 and May 2020.

The protesters are mainly youth, between 18-24 years old, students, with tattoos and piercings and wearing colourful clothes. A major force behind the protests is online platforms, young celebrities and social media influencers. The new age Instagram, Twitter and Snapchat stars with the hashtag #EndTheSars have gained international focus and supports.

From the first week of October, thousands of students and workers were mobilising to oppose the passage of a new controversial jobs law saying it will further deteriorate labour rights and harm the environment.

The new law would allow longer work hours, less job security, cuts mandatory paid leaves and permits the hiring of contract and part-time workers in place of full-time employees. Also, under the law, companies are no longer required to involve the local population in assessing the environmental impact of their activities. Indigenous rights groups said this will lead to the demolition of rain forests at a more alarming rate.

Environmental campaign group Mighty Earth commented on the environmental aspects of the law, ‘Elements of the new law will worsen deforestation and land rights abuses and reverse recent successes in reducing forest loss.’

October 7 saw one of the large gatherings in Bandung, the capital of West Java province when more than three thousand students, from both high school and university, and workers attempted to reach the heavily guarded parliament building. Police fired tear gas at the protesters and broke through the ranks.

Similar clashes occurred in large cities all over the country, including Yogyakarta, Medan, Makassar, Manado and Bandung.

The most unique aspect of the recent protests in Thailand, mostly participated by youths and students, is their public criticism of the monarchy. By breaking the long-standing taboo of criticising the monarchy, two student groups publicly demanded reforms in the monarchy on August 3. A few weeks later, on September 19, more than 100,000 youths marched which has been reported by the media as an open challenge to the King Vajiralongkorn.

The protests were initially triggered when the Future Forward Party was dissolved by the constitutional court in late February. The party was a serious critic of the prime minister Prayut Chan-o-cha and the country’s political landscape designed by the current 2017 constitution.

This first wave of protests was held exclusively on academic campuses and was brought to a halt by the COVID-19 pandemic. Protests resumed on July 18 with a large demonstration organised by the Free Youth umbrella in Bangkok.

ernment and royalist groups against the protesters.

Since the beginning of the COVID-19 outbreak, students are very vocal about the government failure to ensure health care for COVID-19 patients, the health sector scams, corruption in relief distribution and the utter failure to provide any direction for the education sector during the pandemic. The student protest, however, took a fierce turn when a young woman was gang-raped at MC College premise in Sylhet on September 25 by members of the student wing of the ruling Awami League. Later, when a video of the rape of a 37-year-old woman and tortured by a group of youths in Begumganj upazila in Noakhali went viral on social media on October 5, outraged student, as well as women organisations declared continuous protest programmes demanding an end to the prevailing culture of impunity.

The demonstrators protested against the government inaction and the failure of the law enforcement agencies to stop violence against women, the involvement of leaders and activists of the ruling Awami League and its front organisations in such offences and the culture of impunity for which such incidents are continuing unabated.

The Anti-rape protesters organised a 122-kilometre long march from Dhaka to Noakhali on October 17. In the face of protest, many cabinet members have talked about the significance of a social movement against rape, yet police and pro-government people launched attacks on the protesters in Feni that left at least 20 wounded.

Bangladeshi youths and left-leaning student party activists are taking part in the recent protests against government’s decision of closing down the last 25 state-owned jute mills. Young protesters in the south-western part of Bangladesh have faced police brutality, legal actions and intimidation.

When the entire world order is rocked by the pandemic, youths remain fearless as they organise against authorities, the system and talk to the powers. This is the essence that is linking young people miles apart. As long as the essence is intact, no power can tame the revolution.