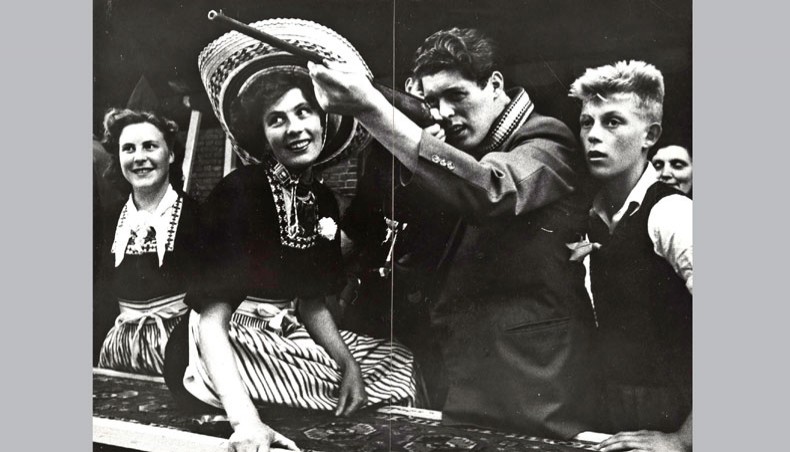 A handout picture taken by Dutch photographer Ed Van Der Elsken and released by the Rijksmuseum shows young people at a fair, one shooting with a rifle, a picture of the unpusblished book ‘Feest’, which means ‘to party’ in Dutch, compiling photographs which captured ‘life in his own raw style’ and an era from the 1950s to the early 60s. – AFP photo

Amsterdam’s famous Rijksmuseum unveiled a set of long-lost pictures Friday taken around the 1950s by Dutch master lensman Ed van der Elsken, considered one of the most influential photographers of the last century.

Famous for his raw street-style photography of daily life in Amsterdam, the newly found picture book contains some 134 never-before-seen images ranging from ordinary people to famous poets and royals.

‘For the curators, this marked the beginning of their research into the Van der Elsken working archive, comprising 11,000 objects,’ the Rijksmuseum said in a statement.

‘One of many surprises was the mock-up design of a photo book that Van der Elsken compiled in roughly the same period that he was working on his magnum opus Sweet Life,’ it said.

A photo of Queen Elizabeth, taken at a banquet at the historic Ridderzaal (Hall of Knights) in The Hague in 1958, shows a youthful British regent with her husband Prince Philip on a state visit, together with Dutch Queen Juliana and her husband Prince Bernard.

Hailing a ‘remarkable discovery,’ Rijksmuseum director Taco Dibbits said the book ‘feest’ captured an era from the 1950s to the early 60s.

Van der Elsken ‘was one of the first photographers in the 1950s who endlessly walked the streets and captured life in his own raw style,’ added Hans Rooseboom, the museum’s curator.

His style inspired generations of top Dutch photographers including Anton Corbijn, famous for his portraits of rock stars and celebrities and award-winning photographer Ilvy Njiokiktjien.

‘I think one of the main things that I take from his work is that it can be really amazing’ capturing the daily lives of people, Njiokiktjien told AFP.

‘It’s in the daily lives of people where we connect,’ said Njiokiktjien, who was named official ‘Dutch National Photographer’ in 2013 for her work.

The newly-discovered photobook goes on display in a new exhibition called ‘Ed van der Elsken: a crazy world’ which opens at the Rijksmuseum on October 30.