Bangladesh calls for more involvement of women in UN peacekeeping 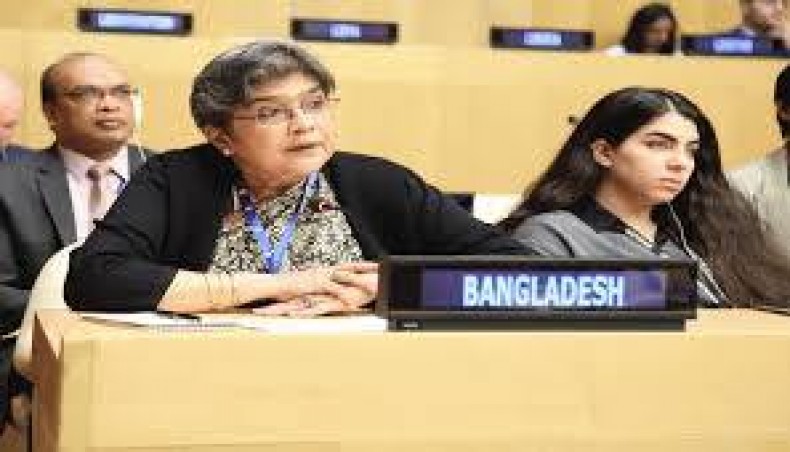 Bangladesh permanent representative to UN ambassador Rabab Fatima has said increased women’s leadership in peacekeeping would require a holistic approach to women’s role in peace as a whole.

Ambassador Fatima made the remarks in an event titled Leading from the Frontlines: Women Leaders in UN Peacekeeping on Friday jointly organied by permanent missions of Bangladesh, Canada and UK in New York, in commemoration of 20th anniversary of the landmark security council resolution 1325.

Adopted in 2000, the resolution 1325 was the first security council resolution to recognise women’s role in peace and security.

The ambassador highlighted the pioneering role of Bangladesh in women’s participation in peacekeeping.

She underlined various critical roles that women peacekeepers play in war-ravaged countries, particularly in addressing sexual and gender-based violence, building mutual confidence, and inspiring women in those societies to contribute in nation-building efforts.

She acknowledged the ongoing efforts of the UN and other member countries in trying to increase women’s participation in peacekeeping.

Referring to the recent security council resolution 2538 on ‘Women in Peacekeeping Operations’, she called for ensuring adequate training, women friendly space and environment in the mission setting to encourage greater participation of women, and implementation of the women, peace and security agenda.

Ambassador Fatima called for accelerated efforts to implement the WPS agenda at the national level, and its internalisation in the UN system including in the country offices.

Ambassador Anwarul K Chowdhury, former under-secretary-general of the UN and president of the UN security council wrapped up and closed the discussion.

Ambassadors and representatives from the permanent missions of Australia, Indonesia and Ireland also participated in the discussion.

The event gathered participation from a wide range of stakeholders including from the diplomatic missions, military establishments, academia, NGOs and civil society.

Bangladesh, as a non-permanent member of the UN Security Council in 2000, played a leading role in the adoption of the Resolution 1325. The Government has last year launched a National Action Plan for implementation of the WPS agenda.

Bangladesh currently contributes the largest number of peacekeepers including women to the UN peace operations.