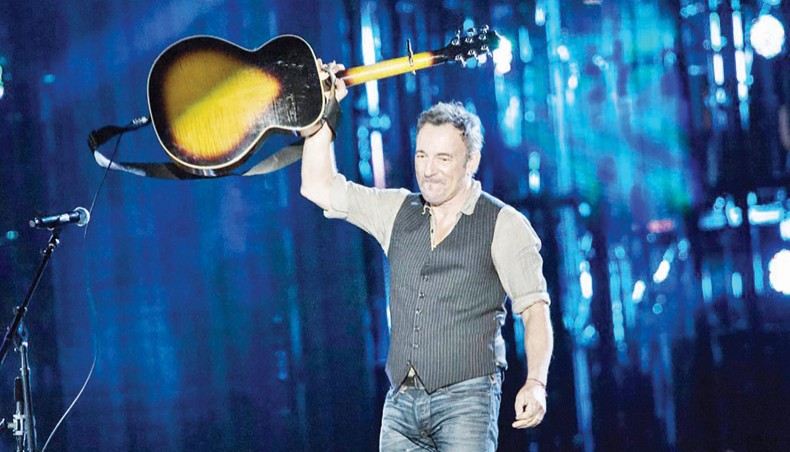 In this file photo taken on November 11, 2014 Bruce Springsteen performs during ‘The Concert for Valor’ on the National Mall in Washington, DC. — AFP photo

The Boss got the band back together for his 20th studio album out Friday, a work that sees the ever-reflective Bruce Springsteen converse with his past selves while meditating on his own mortality.

Springsteen’s album ‘Letter to You’ fits neatly into his canon -- a return to the layered guitars, dramatic percussion and glockenspiel that swelled into the signature sound he coined with his E Street Band, the group he’s performed with since 1972.

After years without inspiration to write new material for the band that includes his wife Patti Scialfa and close friend Steven Van Zandt -- a guitarist also well-known for his role as Silvio in ‘The Sopranos’ -- Springsteen suddenly penned an album’s worth of new lyrics for the ensemble around the spring of 2019.

‘The E Street band is not a job -- it is a vocation. A calling,’ New Jersey’s son-turned-America’s dad says in the documentary about the recording of his latest album, released Thursday on Apple TV.

‘It is both one of the most important things in your life -- and of course, it’s only rock and roll.’

‘Letter to You’ comes a year after Springsteen released ‘Western Stars,’ a solo work harkening back to the 1970s-era musical golden age of Laurel Canyon.

With his new album, one of rock’s most ruminative stars returns to his familiar heart-pounding rhythms -- but lyrically turns inward.

He’s built a decades-long international career weaving tales of characters from bleak American towns, but today Springsteen is singing of the friends he’s lost and considering his own life’s winter.

The artist’s relationship to his former bandmate George Theiss of The Castiles -- a group that took in a novice teenage Springsteen -- served as particular inspiration.

‘The last living member,’ he emphasizes in the documentary. ‘I thought about it for a long time, and those meditations ended up being the songs I’ve written.’

The loss of one of his closest friends and E Street saxophonist Clarence Clemons in 2011 also weighed heavily on Springsteen, a heartbreaking event that came shortly after organist Danny Federici’s death in 2008.

His nine new songs include elegiac titles like ‘One Minute You’re Here,’ ‘Last Man Standing,’ ‘I’ll See You in My Dreams’ and ‘Ghosts.’

The album recorded in just five days also includes three renditions of previously unreleased tracks from the 1970s: ‘Janey Needs a Shooter,’ ‘If I was the Priest’ and ‘Song for Orphans.’

Twangy, harmonica-laden and an exercise in lyrical excess, Springsteen says the songs ‘were and remain a mystery to me. They were just the way I wrote back then, a lot of words.’

He recalls with a grin a call from legendary producer Clive Davis, who told him one Bob Dylan -- whose own work isn’t exactly known for its tight edits -- said if Springsteen wasn’t careful, ‘I was going to use up the entire English language.’

Though ‘Letter to You’ is dropping just weeks before the US presidential election, it’s not a collection of political anthems.

‘Rainmaker’ tells of a demagogue who cons drought-plagued farmers, but Springsteen has said it’s not explicitly about Donald Trump, who the rocker has railed against.

The longtime Democrat has voiced support for Joe Biden and has emphasized the centrist needs to win the presidency not least to restore ‘the power of the American idea.’

The artist, who has praised progressives Bernie Sanders and Elizabeth Warren as well as the Black Lives Matter movement, also told Rolling Stone last month that ‘if we want to have the America that we envision, it’s going to need some pretty serious systemic changes moving leftward.’

Following the release of ‘Letter to You,’ Springsteen in normal times would be planning a global tour next year, but due to the coronavirus crisis, he doesn’t think that could happen before 2022 -- not a small concern for a rock star in his 70s.

‘We’re taking this thing ‘til we’re all in the box,’ he laughs, while toasting to the E Street Band during the film. ‘The greatest thrill continues to be... standing behind that microphone with you guys behind me.’

‘It’s just one of the deepest experiences of my life. I love all of you beyond words.’