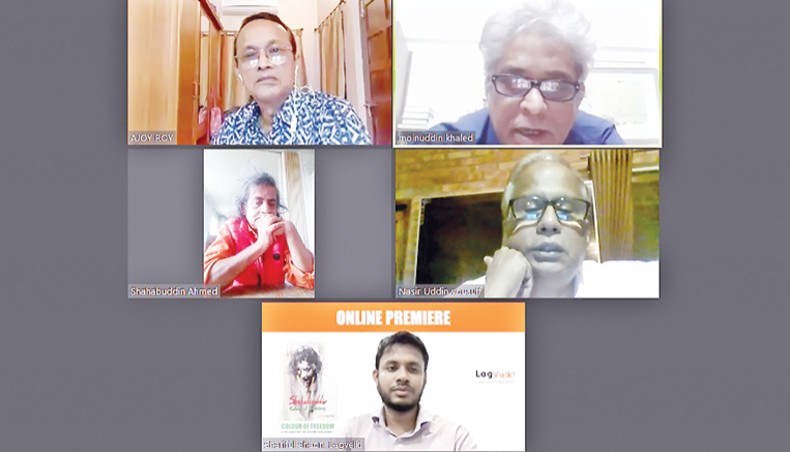 Guests participate at the online premiere show of ‘Colour of Freedom’ on Thursday.

Ajoy Roy said, ‘I first met Shahabuddin Ahmed in 1992 during an art camp held at the Bangladesh Deputy High Commission in Kolkata, India. I got to know him personally, spoke about making this documentary film and started collecting footages for it. To make the documentary more informative and lively, I had to visit Paris to meet Shahabuddin Ahmed for 22 times.  I also developed footages on different subjects related to Shahabuddin Ahmed.’

‘Besides, the film also gives the viewers a glimpse of history of Bangladesh and the Bengali ideology. It has been a great learning experience for me. I thank Shahabuddin Ahmed and his family members for their friendly cooperation,’ added Ajoy.

‘Actually, I have nothing to say about the film, which depicts Shahabuddin Ahmed’s life and work. The credit must go to the director,’ added Moinuddin Khaled.

Nasiruddin Yousuff said, ‘Shahabuddin’s work showcases a special energy linked to human subjectivity and freedom that all humans aspire to attain in any given social context. Ajoy did a great job. His work equally depicts the liberation war and the life of Shahabuddin. My relationship with Shahabuddin is very special — we go back a long way. I also have vivid memories of the liberation war. I thank the organiser for inviting me to this programme.’

Recalling the memory of the liberation war, Shahabuddin Ahmed said, ‘I have nothing to say about the film as it is a reflection of my life. All credits must go to the director. I am here as the protagonist of the film only.’

The documentary is available on www.lagvelki.com.