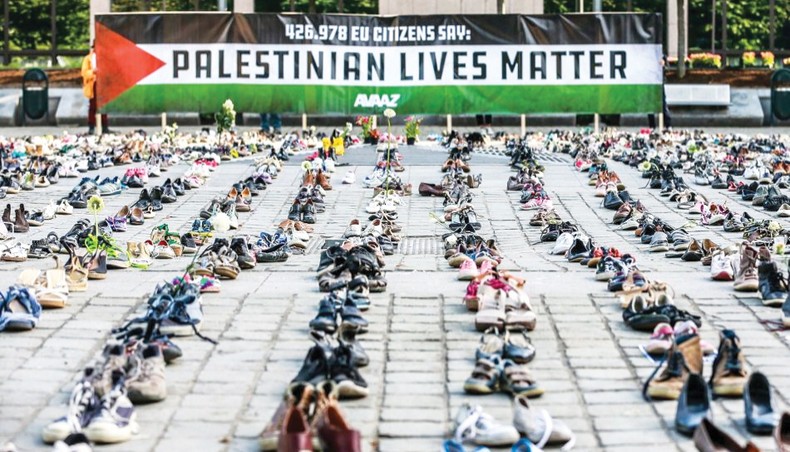 Activists lay out 4.500 pairs of shoes in front of the Council of the EU in Belgium on May 28, 2018 to represent every person killed in the Israel-Palestine conflict in the past decade — Middle East Monitor

IN THEORY, Europe and the United States stand on completely opposite sides when it comes to the Israeli occupation of Palestine. While the US government has fully embraced the tragic status quo created by 53 years of Israeli military occupation, the EU continues to advocate a negotiated settlement that is predicated on respect for international law.

In practice, however, despite the seeming rift between Washington and Brussels, the outcome is, essentially, the same. The US and Europe are Israel’s largest trade partners, weapon suppliers and political advocates.

One of the reasons that the illusion of an even-handed Europe has been maintained for so long lies partly in the Palestinian leadership itself. Politically and financially abandoned by Washington, the Palestinian Authority of Mahmoud Abbas has turned to the European Union as its only possible saviour.

‘Europe believes in the two-state solution,’ PA prime minister, Mohammad Shtayyeh, said during a video discussion with the European Parliament’s Committee on Foreign Affairs on October 12. Unlike the US, Europe’s continued advocacy of the defunct two-state solution qualifies it to fill the massive gap created by Washington’s absence.

Shtayyeh called on EU leaders to ‘recognise the state of Palestine in order for us, and you, to break the status quo.’

However, there are already 139 countries that recognise the state of Palestine. While that recognition is a clear indication that the world remains firmly pro-Palestinian, recognising Palestine as a state changes little on the ground. What are needed are concerted efforts to hold Israel accountable for its violent occupation as well as real action to support the struggle of Palestinians.

Not only has the EU failed at this, it is, in fact, doing the exact opposite: funding Israel, arming its military and silencing its critics.

Listening to Shtayyeh’s words, one gets the impression that the top Palestinian official is addressing a conference of Arab, Muslim or socialist countries. ‘I call upon your parliament and your distinguished members of this parliament, that Europe not wait for the American president to come up with ideas … We need a third party who can really remedy the imbalance in the relationship between an occupied people and an occupier country, that is Israel,’ he said.

But is the EU qualified to be that ‘third party’?  No. For decades, European governments have been an integral part of the US-Israel party. Just because the Donald Trump administration has, recently, taken a sharp turn in favour of Israel should not automatically transform Europe’s historical pro-Israel bias to be mistaken for pro-Palestinian solidarity.

Last June, more than 1,000 European parliamentarians representing various political parties issued a statement expressing ‘serious concerns’ about Trump’s so-called Deal of the Century and opposing Israeli annexation of nearly a third of the West Bank. However, the pro-Israel US Democratic Party, including some traditionally staunch supporters of Israel, were equally critical of Israel’s plan because, in their minds, annexation means that a two-state solution would be made impossible.

While US Democrats made it clear that a Joe Biden administration would not reverse any of Trump’s actions should Biden be elected, European governments have also made it clear that they will not take a single action to dissuade — let alone punish — Israel for its repeated violations of international law.

Lip service is all that Palestinians have obtained from Europe, as well as much money, which was largely pocketed by loyalists of Abbas in the name of ‘state-building’ and other fantasies. Tellingly, much of the imaginary Palestinian state infrastructure that was subsidised by Europe in recent years has been blown up, demolished or construction ceased by the Israeli military during its various wars and raids. Yet, neither did the EU punish Israel, nor did the Palestinian Authority cease from asking for more money to continue funding a non-existent state.

Not only did the EU fail to hold Israel accountable for its ongoing occupation and human rights violations, it is practically financing Israel, as well. According to Defence News, a quarter of all of Israel’s military export contracts (totalling $7.2 billion in 2019 alone) is allocated to European countries.

Moreover, Europe is Israel’s largest trading partner, absorbing one-third of Israel’s total exports and shipping to Israel nearly 40 per cent of its total import. These numbers also include products made in illegal Jewish settlements.

Additionally, the EU labours to incorporate Israel into the European way of life through cultural and music contests, sports competitions and in a myriad other ways. While the EU possesses powerful tools that can be used to exact political concessions and enforce respect for international law, it opts to simply do very little.

Instead of supporting Abbas’s move, the EU criticised it, refusing to provide additional aid for Palestinians until Abbas restores ties with Israel and accepts the tax money. According to Axios news portal, Germany, France, the UK and even Norway are leading the charge.

Germany, in particular, has been relentless in its support for Israel. For months, it has advocated on behalf of Israel to spare Tel Aviv a war crimes investigation by the International Criminal Court. It has placed activists, who advocate the boycott of Israel, on trial. Recently, it has confirmed the shipment of missile boats and other military hardware to ensure the superiority of the Israeli navy in a potential war against Arab enemies. Germany is not alone. Israel and most European countries are closing ranks in terms of their unprecedented military cooperation and trade ties, including natural gas deals.

Continuing to make references to the unachievable two-state solution, while arming, funding and doing more business with Israel is the very definition of hypocrisy. The truth is that Europe should be held as accountable as the US in emboldening and sustaining the Israeli occupation of Palestine.

Yet, while Washington is openly pro-Israel, the EU has played a more clever game: selling Palestinians empty words while selling Israel lethal weapons.

DissidentVoice.org, October 21. Ramzy Baroud is a journalist and the editor of The Palestine Chronicle. He is the author of five books. His latest is These Chains Will Be Broken: Palestinian Stories of Struggle and Defiance in Israeli Prisons.