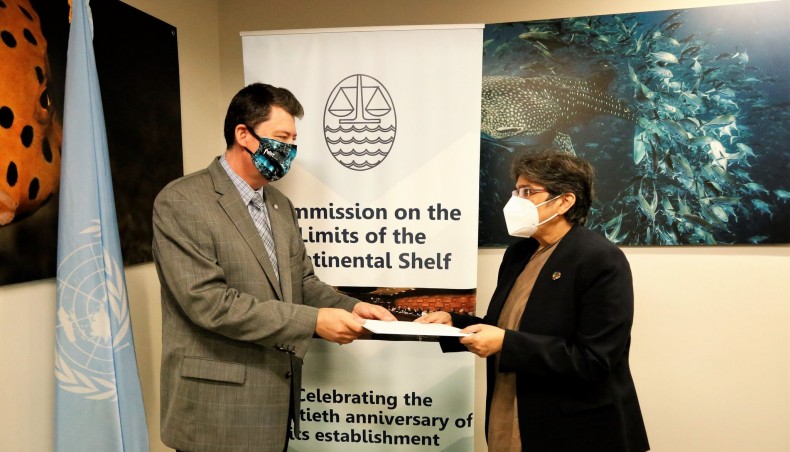 Bangladesh permanent representative to the United Nations in New York Rabab Fatima formally hands over the executive summary of the submission to Dmitry Gonchar, acting director of UN Division of Ocean Affairs and Law of the Sea (DOALOS) on Thursday.- Press Release photo

Bangladesh on Thursday lodged to the United Nations an amended submission on claims to the limits of its outer continental shelf in the Bay of Bengal.

Bangladesh permanent representative to the UN in New York Rabab Fatima formally handed over the executive summary of the submission to Dmitry Gonchar, acting director of the UN Division of Ocean Affairs and Law of the Sea.

Rabab, on the occasion, expected that the amended submission would be included in the agenda of the Commission on the Limits of the Continental Shelf in its next session.

She also highlighted that the determination of the outer continental shelf would enable Bangladesh to explore and exploit natural resources of the seabed and subsoil in those areas.

The original submission to the CLCS was made on 25 February 2011.

The amended submission was made so that the outcome of the settlement of maritime boundaries of Bangladesh with Myanmar and India was reflected in it, as those were delimited in 2012 and 2014 respectively through separate international adjudication processes.

As per UN rule, a sub-commission will subsequently be formed which will examine the information provided by Bangladesh and upon satisfaction, make necessary recommendations on the limits of Bangladesh’s outer continental shelf in the Bay of Bengal.

The amended submission was prepared by a team of experts lead by foreign ministry’s maritime affairs unit secretary Md Khurshed Alam, a retired senior official of Bangladesh Navy, with support from local and international experts.