US gives approval to remdesivir to treat COVID-19 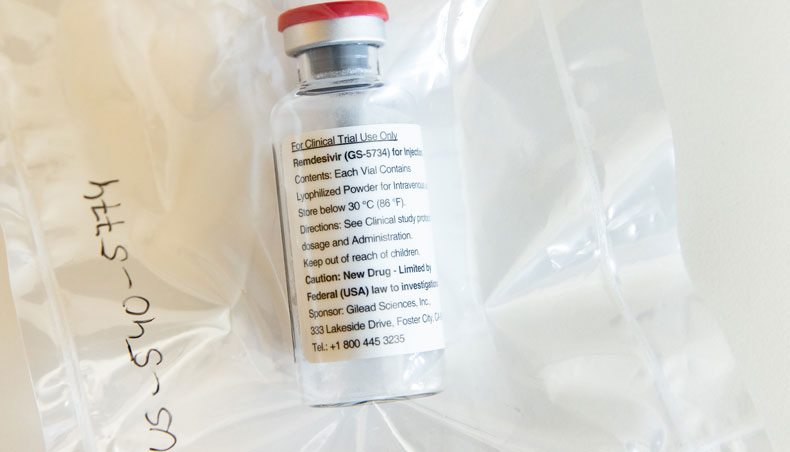 In this file photo taken on April 8, 2020 one vial of the drug Remdesivir lies during a press conference about the start of a study with the Ebola drug Remdesivir in particularly severely ill patients at the University Hospital Eppendorf in Hamburg, northern Germany, amidst the COVID-19 pandemic. — AFP photo

The United States Food and Drug Administration on Thursday granted full approval to the antiviral drug remdesivir as a treatment for patients hospitalised with COVID-19, after conditional authorisation was given in May.

Gilead said that the drug, sold under the brand name Veklury, was the only specific treatment for COVID-19 approved so far under a more rigorous process.

However, other treatments had received authorisation for emergency use, though that approval could be revoked once the public health emergency sparked by the coronavirus pandemic was over.

Other medications, like the steroid dexamethasone, were also being used in the fight against COVID-19.

‘The FDA is committed to expediting the development and availability of COVID-19 treatments during this unprecedented public health emergency,’ said FDA commissioner Stephen Hahn.

‘Today’s approval is supported by data from multiple clinical trials that the agency has rigorously assessed and represents an important scientific milestone in the COVID-19 pandemic,’ he added.

Europe and other countries such as Canada also had granted temporary approval for the use of remdesivir.

Remdesivir, which is administered by an injection, was one of the first drugs to show relative promise in shortening the time to recovery in some coronavirus patients.

But its efficacy in reducing the mortality rate was unproven.

It could be administered to adults and children over the age of 12 who weigh more than 40 kilograms who require hospitalisation for the treatment of COVID-19.

The drug could only be given to patients in a hospital or equivalent setting.

Emergency approval had been granted for its use on paediatric patients under the age of 12 weighing at least 3.5 kilograms.

President Donald Trump, who tested positive for the coronavirus early in October, was treated with remdesivir at a military hospital outside Washington, among other drugs.

The drug was first developed to treat Ebola, a viral hemorrhagic fever.

In February, the US National Institute of Allergy and Infectious Diseases announced it was dusting off remdesivir to investigate against SARS-CoV-2, the pathogen that causes COVID-19, because it had shown promise in animal testing against fellow coronaviruses SARS and MERS.

Its study involving more than 1,000 people, the results of which were released in April, found that patients on the drug had a 31 percent faster time to recovery than those on a placebo.

Since the medicine was complex to manufacture and was administered via injection, rather than a pill, there had been questions about whether supply could initially be limited.

Gilead had set the price at $390 per vial in developed countries, or $2,340 for six vials used over the normal five-day course, though US private insurers will pay $520 per vial.