Admirers pay tribute to the poet at Bangla Academy 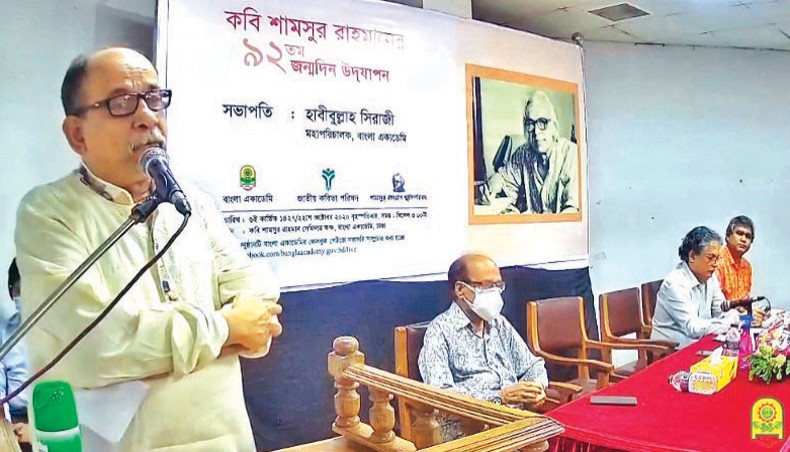 Bangla Academy director general Habibullah Siraji speaks at a programme on Shamsur Rahman at the academy on Thursday.

Today is the 91st anniversary of birth of the late eminent poet Shamsur Rahman.

Admirers and well-wishers paid tribute to the poet at a programme held at Poet Shamsur Rahman Seminar Room of Bangla Academy on Thursday.

‘Shamsur Rahman’s poems give us strength during crises. His works also give us a glimpse into the history of the nation,’ said Tarik Sujat.

‘I am fortunate because my house is located two doors away from where Shamsur Rahman used to reside. His poems are related to Bangladesh and those that are based on the liberation war are multidimensional. He is considered one of the greatest poets of Bangla literature,’ said Shamsuzzaman Khan.

‘Shamsur Rahman’s poems depict the transformation of our society. Language movement changed the poems of East Bengal and we can relate to his poems in the same context. Shamsur Rahman introduced a new kind of engaged authorship as he moved away from the idea of writing in total isolation. He opened up the cloistered space into the greater public arena,’ said Habibullah Siraji.

Shamsur Rahman was born on October 23, 1929, at his grandfather’s house in Mahuttuli, Dhaka to Mokhlesur Rahman Choudhury and Amena Khatun.

He studied in Pogose School in Dhaka during his childhood. He passed his matriculation in 1945 and intermediate from Dhaka College in 1947. He started writing poems at the age of 18. His first poem Unishsha Unapanchash was published in 1943.

Shamsur Rahman took admission at the English department of Dhaka University but did not attend any examinations for three years. After that he got admitted to the BA pass course and received his degree in 1953 and then also got his MA degree.

Meanwhile, five of his poems were published in Natun Kabita in1950, an anthology of poems of thirteen young poets.

Shamsur Rahman was a columnist and journalist too. He had served as the editor of a national daily, Dainik Bangla and the Weekly Bichitra in the 1980s.

Shamsur Rahman had authored a total of 60 collection of poems along with novels and essays.