Azerbaijan and plans of Israeli politicians 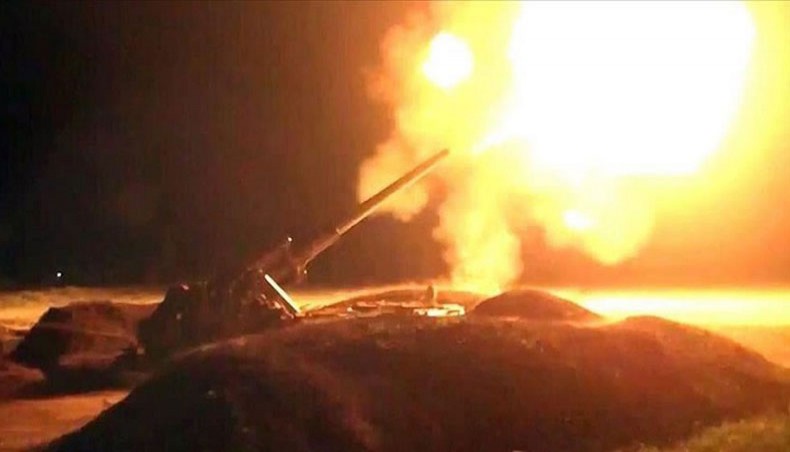 AS THE conflict in Nagorno-Karabakh mushrooms, the Israeli-Azerbaijani arms trade is flourishing, and in this case Netanyahu’s government is being chiefly guided by economic benefits, with political calculations, or rather miscalculations, in second place after those.

It should be pointed out that at present the Israeli economy is experiencing great difficulties due to the pandemic, basically just like other countries. Restaurants, cafes, factories, and plants are temporarily shutting down, and the number of tourists has sharply dropped. Under these conditions, the Israeli government is trying to find some sources of assistance, even temporary ones, for both the economy and the population itself. For these purposes, it is keeping close track of the sales of weapons and high-technology systems.

Presently, in the 31-degree heat at Ben Gurion Airport, it is quiet and calm, without the previous hubbub — civilian flights have virtually ceased due to the rampant COVID-19 pandemic. But cargo flights along the route to Azerbaijan have still picked up recently, and are loaded to capacity. The large number of flights is a direct consequence of the resumption of hostilities between Armenia and Azerbaijan over the disputed enclave of Nagorno-Karabakh. At least four Il-76 aircraft operated by the Azerbaijani cargo airline Silk Way, which serves the Azerbaijani ministry of defence, landed and then took off from Uvda Air Force Base in southern Israel: two before the start of hostilities, and two afterwards. According to the air traffic rules, this is the only airport from which aircraft loaded with explosives are allowed to take off.

Surveillance of the takeoffs and landings, as well as aircraft traffic throughout the Middle East and beyond the region, is something done by both professionals and amateurs, and therefore the flight paths of the four aircraft have been documented by professionals, and on various public websites that follow air traffic activity. Some of these planes have also flown from Baku to Ankara, and to Istanbul and back again, in recent times. All of this speaks of the redeployment of weapons and military equipment, and therefore that Israel is involved in the military conflict in Nagorno-Karabakh — and has taken the side of one of the warring parties.

On September 27 fighting resumed, with a surprise offensive conducted by the Azerbaijanis along the entire front. Many people, both those in military uniforms and civilians, have been killed so far. Both sides are using artillery and tanks, and carrying out airstrikes (using helicopters and drones) on cities and villages. People are now in shelters or basements; some have already moved to places that are safer, while others are still in the process of fleeing.

It is difficult to try to correctly — and objectively — describe the behaviour exhibited by the various parties involved in this struggle, and their temporary and constant allies. The fact remains that: Turkey and Israel, which currently harbour animosity towards each other — Recep Tayyip Erdogan just recently, and sharply, stated that Jerusalem belongs to Muslims — are both giving support to Azerbaijan, a Shiite Muslim country. On the other hand, Iran, one-third of whose population is of Azerbaijani descent —including its Supreme Leader, Ali Khamenei — supports Christian Armenia and, according to some reports, is delivering armaments to it. Greece, a strategic ally of Israel, and currently in conflict with Turkey over gas disputes in the Eastern Mediterranean, is supporting Armenia.

This is, indeed, a very complex and confusing issue.

Another issue that should worry the Israeli government, and everyone else in this country, is that Israel — the state for a people that witnessed six million of its own perish during the holocaust — refuses to recognise the Armenian genocide committed by the Ottoman Empire during World War I. For many years, it adopted this position so that Ankara would not become annoyed, which for 50 years was Israel’s strategic ally against Syria, and then versus Iran. The Mossad and Turkish intelligence services collaborated with each other, and Israel’s defence industry secretly sold billions of dollars worth of weapons to Turkey. In an ironic twist of fate, the systems that Israel sold to the Turks included drones and technology that helped Turkey build the same kind of industry. Turkish Bayraktar drones now operate on the battlefields in Nagorno-Karabakh, as well as in Iraq, Syria, and Libya. Turkey, which in the past has declared a zero conflict policy vis-a-vis its neighbours, is currently in conflict with all of them, or at least is taking part in wars that involve them.

Dismantling the strategic alliance between Turkey and Israel is a systematic and purposeful process, and one which was started by Recep Tayyip Erdogan one-and-a-half decades ago. However, Tel Aviv did not use this as an opportunity to fulfil its historical duty, or follow its conscience and values, regarding the Armenian genocide. The reason for this is Azerbaijan itself. At the same time that Recep Tayyip Erdogan began to distance himself from Israel, Azerbaijan and Israel started becoming closer. It soon became clear that the two countries had formed a kind of strategic alliance — one cantered on mutual hostility towards Iran. Four years ago, prime minister Benjamin Netanyahu paid an urgent visit to Baku, during which Azerbaijani president Ilham Aliyev announced that he had signed a series of contracts for the purchase of Israeli weapons worth $5 billion. So that let the cat out of the bag, and told the whole world the truth about the relations between the two countries.

After that, according to foreign sources, the Mossad created a station in Azerbaijan that serves as ‘its eyes, ears, and a foothold’ for monitoring Iran. According to these reports, Azerbaijan has prepared an airfield that would help Israel if it were to attack Iran. Other reports claimed that an Iranian nuclear industry archive, stolen by Mossad agents in Tehran two-and-a-half years ago, was smuggled into Israel via Azerbaijan. According to some reports, the Israeli aerospace industry in the form of Elbit, Rafael, and other, smaller companies sells almost anything to Baku. This includes artillery, missiles, naval vessels, reconnaissance equipment, and a large number of unmanned aerial vehicles. Almost all Israeli companies that manufacture drones, including assault or self-destructing ‘kamikaze’ drones, have sold their goods to the Azerbaijani army. According to past statements by Armenian officials, some of these drones, including those made by Aeronautics Ltd, have been shot down during incidents along the border with Azerbaijan. The most recent data suggests that Armenian air defence systems, including the Russian S-300 system, were destroyed by Israeli Harop kamikaze drones, which target the signal when radar is switched on.

On several occasions, Armenian politicians, including the top leadership in Armenia, have expressed their concern over the continued sale of Israeli weapons to Azerbaijan. The previous president of Armenia, Armen Sarkissian, called Israeli president Reuven Rivlin about this, expressing his concern over the continued sale of Israeli weapons to Azerbaijan. Reuven Rivlin was demagogic in how he expressed his regret, and noted that Israel has long-standing relations with Azerbaijan, adding that their cooperation ‘is not directed against any other country’. It is true that he forgot the old truth that if there is a weapon, then sooner or later it will start shooting and killing people. In this case, the Israeli president was not interested in the fact that his country, while allegedly actively advocating for the cause of peace, is undermining that peace in another part of the world. It should be repeated that the principle of ‘I’m just straddling the fence’ is unlikely to be painless for the Israelis.

It would be difficult to anticipate that Tel Aviv, which has always condemned the launch of missiles against civilians by Hezbollah and Hamas, will now change its methods. Another country could perhaps suspend its shipments, if only temporarily. Concerning anything related to arms sales, the hypocrisy of Israeli governments over the years is nothing new. The current silence kept by its government on this issue speaks volumes, yet it simply does not understand one simple fact: if, at some time in the future, the Israelis start talking about any allegedly illegal arms deliveries to the Palestinians, they will simply be reminded of the behaviour exhibited by Tel Aviv, which actively supplied arms to Azerbaijan, and so added a generous portion of fuel to the fire of the military conflict. There is only one truth, if there even is one.

It is interesting how people perceive this problem in Israel itself. The majority of the population is quite sceptical, and they believe that thanks to the sharp improvement in relations between Israel and a number of Gulf countries, they no longer need an ‘oil for arms’ alliance with Baku. For moral and strategic reasons, Israel should now take a look at Armenia. Israeli-Azerbaijani relations, Israeli media outlets state, have always been based on transactions — and not only in terms of the ‘oil for arms’ deal. Azerbaijan views its deepening ties with Israel as a means of currying favour with Washington, as recently confirmed by Azerbaijan’s ambassador to the United States. Baku seeks to involve Jewish community groups in the United States in this scheme, positioning itself as a champion of ‘interfaith dialogue’.

But closer ties with Israel, writes the Israeli Haaretz newspaper, did not prevent Baku from establishing excellent relations not only with Turkey, but also with Israel’s implacable enemy, Iran. The two countries have deepened their relationship in recent years, with Hassan Rouhani making a more substantial relationship with Azerbaijan one of his top priorities. In reality, Azerbaijan has been cooperating with Iran for many years, ranging from selling a 10 per cent stake in one of the country’s largest oil pipelines to sending millions of dollars to state-run Iranian companies in a major money laundering scandal (which recently involved IAI, a major Israeli aerospace industry player). In addition, despite its efforts to develop relations with Israel, Baku has consistently refused to establish full-fledged diplomatic relations with this country, and open up an embassy, due to pressure from Iran, the Organisation of Islamic Cooperation, and Turkey. Despite trying to constantly appease the regime in Iran, Azerbaijan still seeks to woo both Israel and the west away from Armenia.

When analysing all these facts, an obvious conclusion offers itself. Yes, flirting with Azerbaijan and supplying it with the cutting-edge weapons over a certain, very short-lived stage, can economically help Benjamin Netanyahu’s current government, but over the long term this Azerbaijani area of focus will only cloud the ability to correctly explain Israeli policy for various politicians. And it is unlikely that this will help advance Israeli policy on the world stage, including with regard to various facets involving how to resolve its long-standing Palestinian problem.