US DEPUTY SECRETARY OF STATE 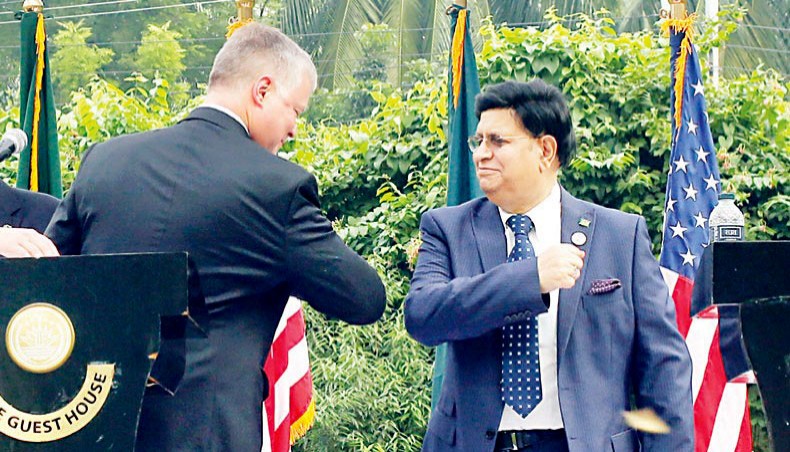 THE just-concluded visit of Stephan Biegun, the US deputy secretary of state, was a prelude to the visit later in the month of Mark Esper, the US secretary of defence to New Delhi. The visits are a little difficult to grasp given the fact that the US voters are already in the early voting phase of the presidential election on November 3 that, with president Trump seeking a second term, would be the most important presidential election in the post-World War II history of the United States. The president is substantially down in the polls.

President Trump’s tenure since January 2017 has been spent creating an alternative world where he could pass anything he said or wanted as true, unchallenged. Thus, he said that coronavirus was flu that would go away without medicine or vaccine, which would not require masking or social distancing for protection. It was not that he was not aware of the danger of the virus. He admitted to Bob Woodward who interviewed him for his book Fear which has since been published how dangerous the virus was. Yet, he called it flu because he was afraid that if people knew the truth, it would damage his re-election. He, thus, did not take the precautions that world leaders took in their respective countries. If he had, the majority of the 2,15,000 Americans who died from the virus thus far would have still been alive.

The president by his leadership or the lack of it and in pursuance of alternative reality has brought the Republican party, according to Nebraska Senator Ben Sassy, ‘staring down the barrel of a blue tsunami.’ The senator accused ‘the president of bungling the response to the coronavirus pandemic, cozying up to dictators and white supremacists, and offending voters so broadly that he might cause a ‘Republican blood bath’ in the Senate.’ By all available polls with 15 days now left for the election, the president is trailing his opponent vice-president Joe Biden by a double-digit margin.

Therefore, president Trump should be focusing on the election rather than sending key members of his administration on a leather hunt abroad with his chances of re-election uncertain. The visits nevertheless make some sense because they flag president Trump’s only serious attempt in international politics with China at the receiving end. The deputy secretary was in Dhaka to sell the anti-China military strategy, Indo-Pacific Strategy in which India, Japan, and Australia are the United State’s partners and called the Quad. The defence secretary will be in Delhi and the secretary of state Mike Pompeo in Colombo later in the month for the same objective.

The IPS is part of the Pacific Pivot Strategy of president Obama that was floated in 2011 to contain China that had expanded its military and economic power in the Asia-Pacific region while the US had remained focused on wars in Iraq and Afghanistan during the two terms of president GW Bush in 2001–2009. The Trans-Pacific Partnership, a free-trade zone of 12 countries in the Asia-Pacific region, was later introduced in 2016 to strengthen the Asia Pivot strategy. President Trump withdrew the United States from the TPP almost immediately on coming to office in 2017 and transformed president Obama’s Pacific Pivot strategy into the purely anti-China military strategy. He also changed the name to India-Pacific Strategy, thus giving India greater importance in the new strategy.

President Trump’s IPS gained importance for some of the countries in the Asia Pacific region in the light of ‘Beijing’s rising assertiveness against Hong Kong, Taiwan, and counter claimants in the East and South China Seas, and now even against India along the Himalayas.’ Nevertheless, the solely military nature of the IPS may not be welcome to many countries in the region that have economic, commercial, and investment ties with China and are benefiting from it and are also part of China’s Belt Road Initiative that, too, is providing considerable economic incentives and benefits to these countries.

Bangladesh’s predicament is certainly not in the category of countries that feel threatened by ‘Beijing rising assertiveness.’ China is now very deeply involved in Bangladesh’s economic infrastructural development in a mega way. Therefore, Bangladesh’s national interests should be a major obstacle to committing to becoming a part of the India-Pacific Strategy because it would not be welcomed by China. At the same time, an outright rejection of the IPS would also put its national interests in the United States such as with its critically important apparel export in jeopardy. The United States is also the second-largest investor in Bangladesh.

An argument such as one that some experts have suggested under Bangladesh’s ‘friendship for all and malice towards none’ foreign policy as a way out from choosing the United States’s Indo-Pacific Strategy would, of course, be childish because such a policy has for long become redundant in international politics. (Incidentally, this policy is also the same that Mohammad Ali Jinnah also touted as the foreign policy of Pakistan upon the country’s independence in 1947). The wisest way for Bangladesh would be to wait for the United States’s presidential election to be over. If Joe Biden was to become the 46th president of the United States which is very likely, then there would not be any need to decide on the IPS because as president Trump’s only major international policy, it is certain to vanish with him with something different expected to take shape. And the trade benefits that the deputy secretary promised to counter China’s offer to reduce the tariff to zero on 97 per cent of Bangladesh’s exports would also become meaningless under the Biden administration.

Meanwhile, many Republicans in the senate are distancing like senator Ben Sassy from the president encouraging the well-known retired news anchor Dan Rather to use the analogy of rats fleeing a sinking ship in a recent tweet. Fox channel’s owner Rupert Murdoch recently said that president Trump would lose by a landslide. The chips are down for the president. Therefore, the visit of deputy secretary Stephan Biegun and the issues he raised in Dhaka must be set in the pause mode till the United States chooses its 46h president.

M Serajul Islam is a former career ambassador who writes from the USA.