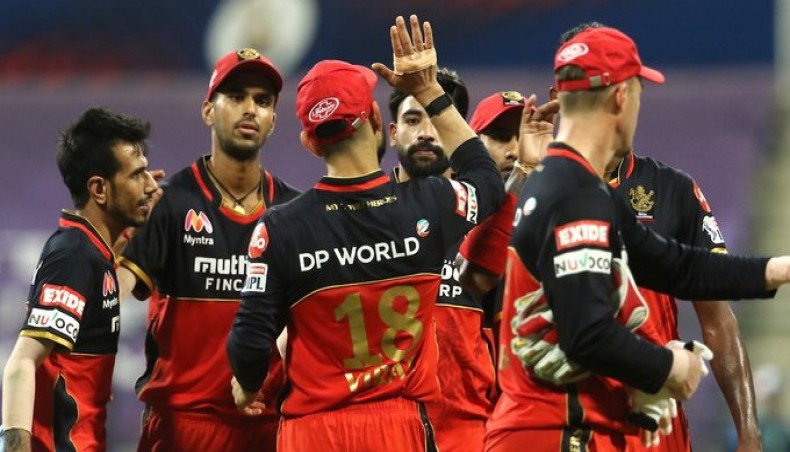 Siraj bowled two successive maiden overs -- the first ever in the IPL -- of his four to keep Kolkata down to this season's lowest score of 84 for eight in Abu Dhabi.

Skipper Virat Kohli, who made 18, and Gurkeerat Singh, 21 not out, took Bangalore home in 13.3 overs as the side went level on 14 points with table toppers Delhi Capitals.

Siraj, who was brought in as the only change in the XI, rewarded the team with two successive wickets of Rahul Tripathi and Nitish Rana in his first over.

‘Last year Siraj had a tough year and a lot of people went hard at him,’ Kohli said of the 26-year-old quick who has played just three T20 matches and one ODI for India since 2017.

‘This year he has worked hard and was bowling well in the nets. He has seen the results now but we want him to keep following the process.’

His South African pace partner Chris Morris sent back Shubman Gill and Siraj got England's Tom Banton caught behind for 10 as Kolkata slipped to 14 for four.

‘I had been practicing in the nets with the new ball and with my outswing it gave me confidence to finally get the new ball,’ said man-of-the-match Siraj.

‘I wanted to give a magical performance for RCB after they backed me so much. And Morris has been a big help for our bowling unit.’

Skipper Eoin Morgan walked in to put up some fight against an inspired bowling as the left-hand batsman scored 30 off 34 deliveries. He got out to mystery spinner Washington Sundar.

Yuzvendra Chahal made an impression with his leg-spin to send back former captain Dinesh Karthik trapped leg before wicket for four and got Pat Cummins also for four.

Lockie Ferguson made an unbeaten 19 as Kolkata survived their 20 overs, which at one point looked unlikely, after electing to bat first.

‘Being four or five down as early as we were is disappointing,’ said Morgan.

‘RCB bowled well, but we should have countered that better. And with that dew, we probably should have bowled first.’

In reply, Bangalore openers Devdutt Padikkal and Aaron Finch put on 46 runs. Padikkal was run out for 25 and Finch made 16 before falling to Ferguson.