Nazmul XI to take on Mahmudullah XI in final 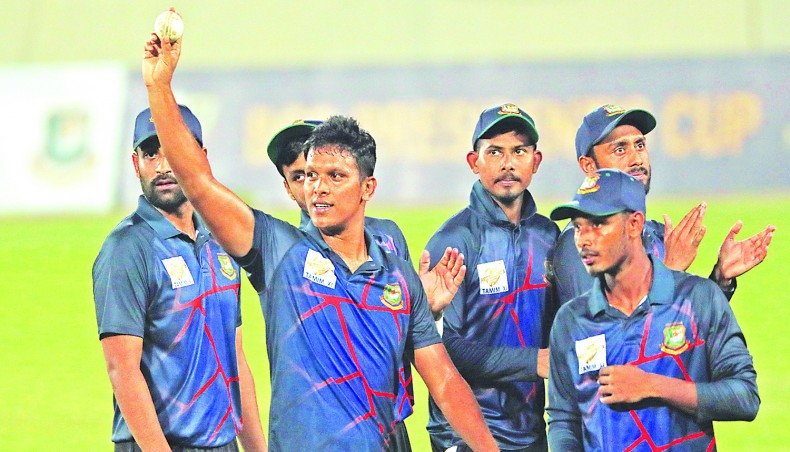 A disciplined bowling performance from Nazmul XI led by Taskin Ahmed’s 4-36 handed them a seven-run win in Duckworth-Lewis method over Tamim XI in the final group-stage match of the BCB President’s Cup at the Sher-e-Bangla National Stadium on Wednesday.

With the win in the rain interrupted match, Nazmul XI top the points-table with six points and will take on second-place Mahmudullah XI in the final on Friday.

Batting first, Mushfiqur Rahim (51 off 75 balls) and Afif Hossain (40 off 61 balls) were the only Nazmul XI batsmen to make any meaningful contribution as Mohammad Saifuddin claimed 5-26, the first five-wicket haul in the tournament, to bowl them out for 165 in 39.3 overs.

In reply, despite skipper Tamim Iqbal’s (57 off 85 balls) first half-century in the competition and Saifuddin’s late attempt (10 off nine balls) Tamim XI failed to chase down the revised target of 164, getting bundled out for 156 in 40.2 overs.

Earlier, Nazmul XI’s top-order collapsed, as they were reduced to 25-3 after eight overs.

Mushfiq and Afif came to their team’s rescue once again in the tournament, this time adding 90 runs for the fourth wicket.

Their partnership was interrupted by rain and the game was stopped for more than an hour and the match was then reduced to a 41-over-a-side contest.

Saifuddin dismissed Mushfiq in the 29th over after which Nazmul XI lost their remaining six wickets for just 50 runs to be all out for a below par total, which in the end proved to be sufficient.

Chasing 164, Tamim XI looked on their way to win the contest while their captain was batting at the crease.

But after Tamim was dismissed in the 28th over with the score on 101-3, the rest of the batting order crumbled under the pressure.

Mohammad Mithun made 29 off 32 balls and Saifuddin tried his best to pull off an unlikely win, but in the end their effort wasn’t enough.