Dhawan ton in vain as Punjab down Delhi 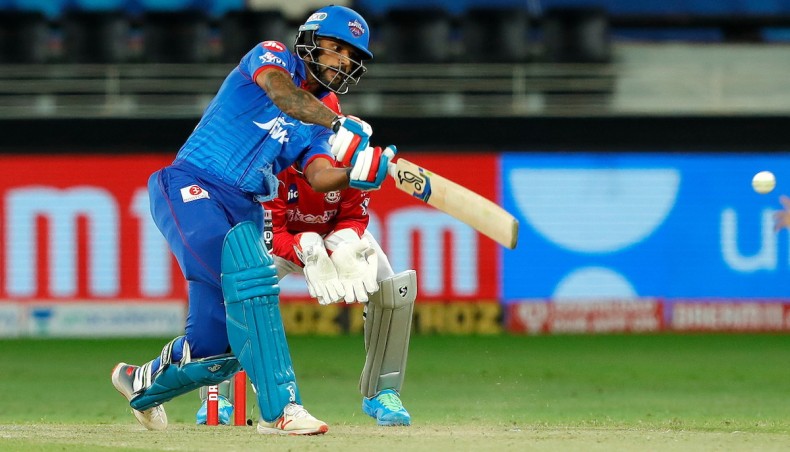 Shikhar Dhawan on Tuesday became the first batsman in the Indian Premier League to hit two successive centuries but his Delhi Capitals lost by five wickets to Kings XI Punjab.

The left-hand opener smashed an unbeaten 106 off 61 deliveries to guide Delhi to 164 for five, a total that proved insufficient as Punjab won with one over to spare in Dubai.

The KL Rahul-led side moved up to fifth in the eight-team table as Nicholas Pooran scored 53 and Chris Gayle hit 29 off 13 balls.

But Dhawan, who hit his first IPL ton of the season in a match-winning knock on Sunday, was named man of the match for his 57-ball hundred.

‘The boys have been playing well in other games. Today I had to take the responsibility on myself,’ said Dhawan.

‘It is good that I am scoring consistently so you carry it into the next games. We are going to have a discussion and see where we can improve.

‘Of course, it is going to be a learning. This is not going to put us down. Just take our lessons, and come back stronger.’

Dhawan used the sweep and the slog sweep to great effect as he hit 14 fours and three sixes, but the rest of the Delhi batting failed to fire, with skipper Shreyas Iyer (14) and wicketkeeper-batsman Rishabh Pant (14) as the next best.

Punjab lost early wickets, including Rahul for 15 and Gayle, bowled by Ravichandran Ashwin, but Pooran kept the chase on track in his 28-ball knock.

Delhi quick bowler Kagiso Rabada sent back Pooran and then Glenn Maxwell, for 32, to put Punjab in a spot, but Deepak Hooda, on 15, and Jimmy Neesham, on 10, took the team home.

Shami gave away just 13 runs from his final two overs and got two wickets of Marcus Stoinis and Shimron Hetmyer.

‘Shami obviously is coming in with confidence from the last game,’ Rahul said of his paceman who defended five runs in a super over to help his team beat Mumbai Indians in the Sunday match that witnessed IPL's first double super over.

‘He is our senior bowler, and an international, and he is getting better and better every game.’