NBR collection grows by 4.11 per cent in July-September 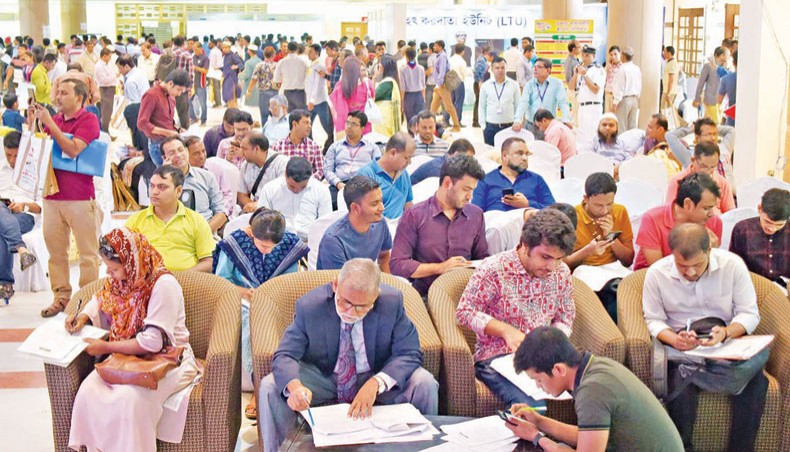 A file photo shows people busy filling in tax return forms at the central venue of the income tax fair at Officers’ Club Dhaka on November 17, 2019. Revenue collection by the National Board of Revenue gained further pace in the first quarter of the current fiscal year 2020 2021, riding on significant growth in September after the adverse impacts of the COVID-19 outbreak on the economy. — New Age photo

Revenue collection by the National Board of Revenue gained further pace in the first quarter of the current fiscal year 2020‑2021, riding on significant growth in September after the adverse impacts of the COVID-19 outbreak on the economy.

According to the NBR’s provisional data, revenue collection grew by 4.11 per cent in July-September of the current FY21 against 0.16 per cent growth in July-August.

Revenue collection, however, fell Tk 13,724 crore short of target as tax officials managed to collect only Tk 49,990 crore in the first three months of FY21 against a collection target of Tk 63,714 crore set for the period.

The collection in July-September accounted for 15.15 per cent of the full year’s target of Tk 3.30 lakh crore, the data showed.

The NBR collected Tk 48,017 crore in revenues in the July‑September period of the last FY20.

Officials said that although the NBR lagged behind in achieving the target, it was a positive sign that revenue mobilisation was gaining momentum and recovering from the coronavirus fallouts.

The growth rate is not too bad compared with the performances in the previous two months of the current FY21 as well as the growth rate in the first quarter of the last FY20, they said.

The NBR’s earnings grew by 3.98 per cent in July‑September of FY20 despite the economic situation being normal during the period.

The collection target is also too ambitious to achieve, they said, adding that the NBR would have to achieve 48 per cent growth over last year’s actual collection of Tk 2,23,462 crore to meet the target which was practically impossible.

Revenue collection will grow further in the coming months unless the much-talked second coronavirus wave hits the country, they said.

All three wings — customs duty, value-added tax and income tax — returned to the positive growth terrain in the July‑September period, they added.

According to the data, revenue earnings from customs duty, VAT and income tax grew by 6.78 per cent, 1.19 per cent and 4.92 per cent respectively in the first three months of FY21.

Customs duty, VAT and income tax collections, however, lagged behind target by Tk 5,848 crore, Tk 5,086 crore and Tk 2,791 crore respectively in the period, the data showed.

Tax officials collected the highest amount of revenue worth Tk 18,111 crore in VAT followed by Tk 15,959 crore in customs duty and Tk 15,920 crore in income tax.

The NBR recorded negative growths in all three sectors in July, the first month of the fiscal year.

Although customs duty and income tax managed to grow in July-September, VAT remained in the negative zone in the period, the data showed.

Field-level VAT officials said that VAT collection would increase further in the coming months as economic activities had almost returned to normalcy.

The local demand and supply situation is also improving, they said.

In September alone, the NBR collected Tk 19,830 crore against a collection target of Tk 22,912 crore.