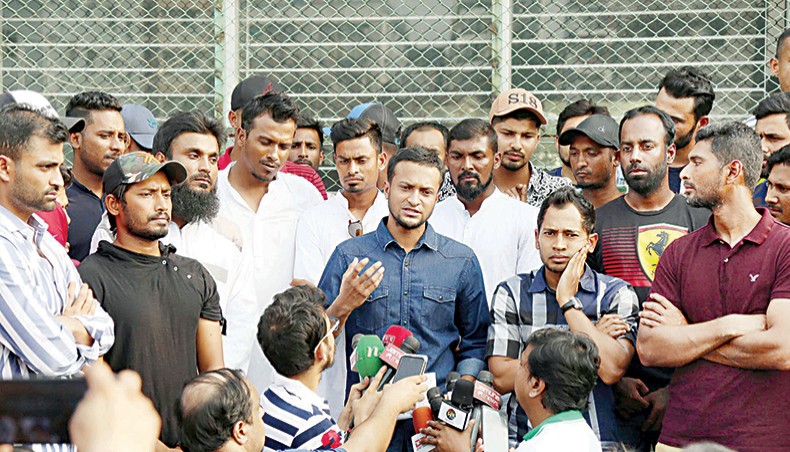 Exactly one year ago Bangladesh cricket witnessed an unprecedented event when all first-class players went on a strike to fulfill their 11-point demands.

The strike ended after two days when Bangladesh Cricket Board verbally agreed to their demands but in the year following the seismic event the board has fulfilled parts of some of the demands while completely ignoring the others.

The players’ first demand was the immediate disbandment of the current committee of Cricketers Welfare Association of Bangladesh and to let the cricketers elect the next committee.

But the CWAB committee has remained unchanged since then and its general secretary Debabrata Paul blamed the senior cricketers’ unresponsiveness for it.

‘After the strike we sat with some senior cricketers and discussed what they wanted from a players’ welfare association. They could not give any satisfactory answer,’ Debabrata told New Age.

‘Later we set a date for meeting in a place at Dhanmondi with senior cricketers. Only Jahurul Islam showed up where CWAB president Naimur Rahman, vice-president Khaled Mahmud and others were present,’ he added.

But Debabrata said that they are trying to play their part as the players’ association and will soon declare the date of election to form a new committee.

‘We have moved for the cricketers for their share of appearance fee from the ICC World Cup 2019. We raised funds to help affected cricketers in the corona pandemic. We formed committees in almost all the districts. Our president has said repeatedly that the new date of election will be announced soon,’ he said.

The players demanded to raise the match fee of first-class competition National Cricket League to Tk 1,00,000 and to improve accommodation, traveling, catering and other facilities.

‘I thank BCB for upgrading our travel arrangements in first-class cricket which has actually impacted the game. The players are not getting tired after journey as we are taking flights. The match fee has also increased,’ Enamul told New Age.

The players had also demanded pay raise for umpires, local coaches and groundsmen and according to umpires committee secretary Soylab Hossain Tutul umpires are earning more in NCL then before.

But local coaches are yet to receive any pay hike, said Mahmudul Hasan Pappu, a BCB appointed cricket coach in Mymensingh.

‘Last time I received a pay raise was maybe two years ago. I heard that there were talks of pay raise, but later it was put on hold for corona,’ said the local coach.

Another important demand of the cricketers was to sign individual contracts with clubs for the Dhaka Premier League rather than getting drafted through player-by-choice.

This demand was fulfilled by the board but it has now backfired for the players as the clubs are now reluctant to clear their dues for the coronavirus-hit season, which force shut the league after the first round.

BCB game development committee chairman Khaled Mahmud has already told the media that the board will not negotiate with the clubs for the players’ payment, which put the players in a vulnerable position, said Enamul.

‘Actually we wanted to move back to the old system and my personal opinion is that it actually backfired because now BCB holds no responsibility. We wanted it and we have to pay the price as well,’ Enamul said.

But BCB president Nazmul Hasan has expressed his reluctance to revert back to the old model in previous media interactions.

One of the points raised by the players was to increase the number of nationally contracted cricketers to 30 but in the latest offering, BCB took a total 17 cricketers in national contract under various grades and categories.

Looking back at the strike, BCB media committee chairman Jalal Yunus felt that the entire ordeal was unfortunate and he blamed the players for resorting to such extreme measure.

‘They call the BCB president even for futile matters. Were their issues that big that they had to create such ruckus, put the first ever India tour in jeopardy and halt first-class cricket?’ Jalal told New Age.

Jalal also said that the board could have penalised the nationally contracted cricketers for their involvement in the movement but chose not to.

‘In the national contract, there are conditions and code of conduct on the basis of which we could have taken disciplinary actions. But for national interest and for the India series we did not do it. But such actions from the leading cricketers was really unexpected,’ he said.

Former Bangladesh skipper Shakib Al Hasan led the players in that strike and saw it to a successful conclusion but a few days later got sidelined from cricket with a one-year sanction from the ICC for not disclosing contacts with a bookmaker.

Bangladesh cricketer Sohag Gazi felt that Shakib’s sanction took the wind out of the players’ movement and stalled the momentum gained from the strike.

‘Shakib is an icon player. If he is on our side the negotiation becomes easy. The news of his sanction might have had an impact on others, which slowly took away our spirit,’ Gazi said.