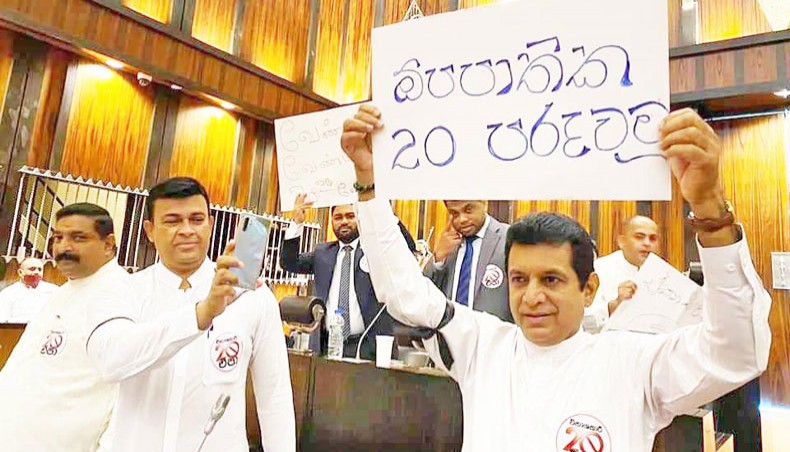 Sri Lankan parliamentarians protest against the 20th amendment to the constitution inside the parliament on September 22. — Zenger/Dammika Jayawardana

THE ongoing investigation into the Easter bombing in 2019 which created hundreds of victims and brought the country’s economy to its knees, reveals more and more the lack of responsibility and failure on the part of the government authorities at that time. Everyone being questioned in regard to the security failure seems to be seeking to pass the responsibility onto someone else or to say that all are responsible and so no one is. The 19th amendment which reduced the powers of the president and distributed it to the prime minister, parliament and other state institutions has been made the scapegoat for those human failures and unwillingness to take responsibility. The political problem with the 19th amendment is that it has enabled those who wish to shirk their responsibility many ways to point their fingers at the others.

It is in this unsavoury context that the proponents of the 20th amendment have been able to make their case to the general population that president Gotabaya Rajapaksa will do what other leaders have not been able to do. The 20th amendment goes to the other extreme of transferring powers to the president at the expense of other institutions which the president is willing to accept as the way forward to meeting the expectations of the people. This was personified in his statement that even his verbal directions should be taken as the equivalent of written government circulars. There have been many serious criticisms of this presidential statement especially in the social media. However, to people who want their problems to be solved speedily and without getting stuck in bureaucracy, such criticisms are seen as politically motivated.

Those who are able to see the larger picture, and from a comparative perspective, are aware that governments in which one institution dominates all others and in which there are no checks and balances are more likely to descend to autocracy instead of delivering good results to the people so that they enjoy the benefits of development and the protection of human rights. As one of the country’s foremost political analysts Professor Jayadeva Uyangoda has said, ‘Undermining the rule of law, weakening the independence of the judiciary, and making the accountability institutions subservient to the executive will initially please the egos of the politicians and officials, but in the long run are bound to create a deep chasm between the government and the citizens, rulers and the ruled.’ The lived experience in the world favours Professor Uyangoda. But the popular perception is to give the proposed new order a chance.

IN ITS current formulation the 20th amendment has many deficiencies and excesses. Some of these have been noted by the Supreme Court in its determination of the 39 cases filed before it by concerned citizens, political parties and civic organisations. There have been unprecedented criticisms of the proposed 20th amendment by sections of the religious clergy and civil society and not only by politically motivated opposition parties. They are concerned about the corrosive effect of unchecked power on power-holders. Despite the strong opposition to the 20th amendment the indications are that the government leadership is unwavering to have its way and have the constitutional amendment passed in parliament with the required two-thirds majority. This resolve is reflected in the short date of October 21 for the debate to take place in parliament even though the Supreme Court’s determination of the constitutionality of the draft amendment will only be officially presented to parliament on October 20.

The absurdity of giving the parliamentarians only one day to study the Supreme Court determination and to come up with their own proposals is mitigated by the leak of a document purporting to be the determination of the Supreme Court on the proposed 20th amendment. This document became available on the internet and appeared on several news sites on October 10, the very day it was handed over as a confidential document to the president and speaker of parliament. The fact that the document was strategically leaked to the public indicates that the government wishes to proceed with the new constitutional order as soon as possible and without any delay. It has even denied the opposition the three days it requested for the debate to take place and limited the debate to just two days.

The manner in which the 20th amendment is being taken to parliament without delay is both an indication of confidence as well as the belief in decisive leadership that stands in contrast to the mode of governance of the previous government. That government headed by president Maithripala Sirisena and prime minister Ranil Wickremesinghe made many good plans and made commitments which they could not implement due to the lack of decisive and cohesive leadership. By way of contrast, president Gotabaya Rajapaksa appears to be a leader who is driven by his sense of destiny to those who voted him to the presidency believing in his pledges to them. The government’s position is that the centralisation of power envisaged by the 20th amendment is necessary to face the unprecedented challenges the country currently faces.

IN PARTICULAR, the country faces a difficult international environment in which the big powers are putting a great deal of pressure on it. With the exception of China, the big powers have shown strong interest in human rights issues especially in relation to the long standing ethnic conflict. While the motivations of big powers may be questioned, debt repayments, international market access and geo-political security considerations come mixed with human rights issues. From 2011 onwards Sri Lanka has been subjected to resolutions of the UN Human Rights Council which put it into the category of countries such as North Korea, Syria and Myanmar. This was one of the challenges that the previous government took up and committed itself to resolve but failed to succeed in.

The previous government’s efforts to co-sponsor a UN Human Rights Council resolution was appreciated internationally but was controversial within the country. The government did not have the strength or commitment to implement what it promised. Mechanisms that it set up such as the Office on Missing Persons and the Office of Reparations have been left high and dry. Even the Rs 6000 a month that was promised to families of the missing has not been given to most of them who live in poverty without their breadwinner for the most part. The manner in which present government addresses these issues can win it more support from the international community while also addressing the problem of the ethnic conflict that has weakened and divided the country for decades.

At the March session of the UN Human Rights Council in Geneva this year the government formally announced its withdrawal from the co-sponsorship of UNHRC Resolution 30/1 of 2015 entered into by the previous government. In February, when it first announced its withdrawal from the UNHRC resolution, the government pledged a nationally designed reconciliation process to replace the previous one, which it said was internationally driven. Concluding his speech at the UNHRC session in Geneva foreign minister Dinesh Gunawardena said: ‘No one has the wellbeing of the multi-ethnic, multi-lingual, multi-religious and multi-cultural people of Sri Lanka closer to their heart than the government of Sri Lanka.’ Once armed with the powers of the 20th amendment the government can go down the path of a ‘tribal society’ as warned by the religious clergy or create a modern state that incorporates a nationally designed reconciliation process in which equal citizenship and inclusive development leaves out no section or part of the country. The people’s hope will be that president Gotabaya Rajapaksa will succeed where predecessor presidents armed with similar powers failed, although the experience over the past year is less reassuring with COVID-19 and economic debt on the rise.