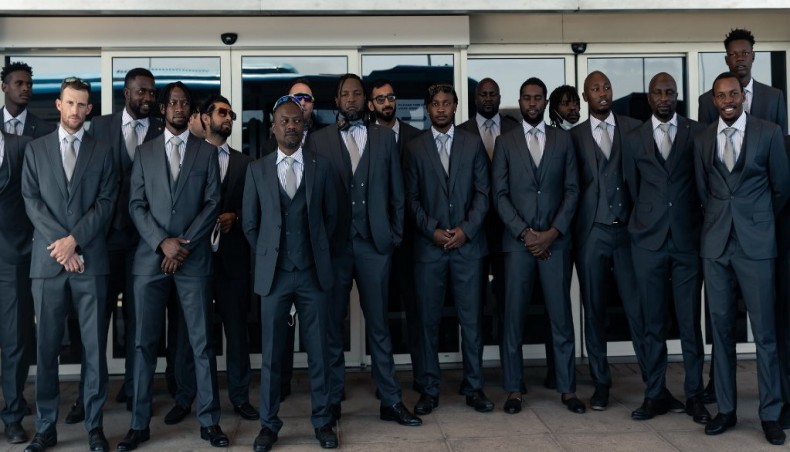 Zimbabwe cricket team players pose for photograph prior to their departure for Pakistan at the Robert Mugabe International Airport in Harare on Monday. — AFP photo

Zimbabwe's cricket squad arrived in Pakistan on Tuesday -- minus their Indian coach, who had been advised to stay away from the rival South Asian nation.

The 20-man Zimbabwe team is competing in a series of one-day internationals and Twenty20s, the first of which is slated for October 30 in Rawalpindi after the players complete a mandatory virus quarantine period.

Pakistan had granted Zimbabwe coach Lalchand Rajput a visa, but he did not travel as per his government's advice.

‘Zimbabwe head coach Rajput will miss the Pakistan tour after Indian embassy in Harare wrote to us asking that Rajput, who is an Indian national, be exempted from visiting Pakistan,’ a Zimbabwe Cricket (ZC) statement read.

India and Pakistan have been bitter rivals since independence from Britain in 1947, with relations taking a fresh turn for the worse last year following New Delhi's decision to strip Indian-administered Kashmir of its partial autonomy.

In Rajput's absence, bowling coach Douglas Hondo will supervise Zimbabwe for the tour, with allrounder Chamu Chibhabha at the helm.

The schedule will see three one-day internationals in Rawalpindi on October 30, November 1 and 3, while three Twenty20 internationals are set for Lahore on November 7, 8 and 10.

Rajput played two Tests and four one-day internationals in a short career before turing to coaching. He was appointed Zimbabwe coach in August 2018.

The limited-over series will further the revival of international cricket in Pakistan, suspended after the Sri Lankan team bus was attacked in Lahore in 2009.

Zimbabwe were the first team to end Pakistan's five-year isolation by touring in 2015.

South Africa is also slated to tour Pakistan in January, while England seem likely to come for the first time since 2005 for a three-match Twenty20 series, also in January.