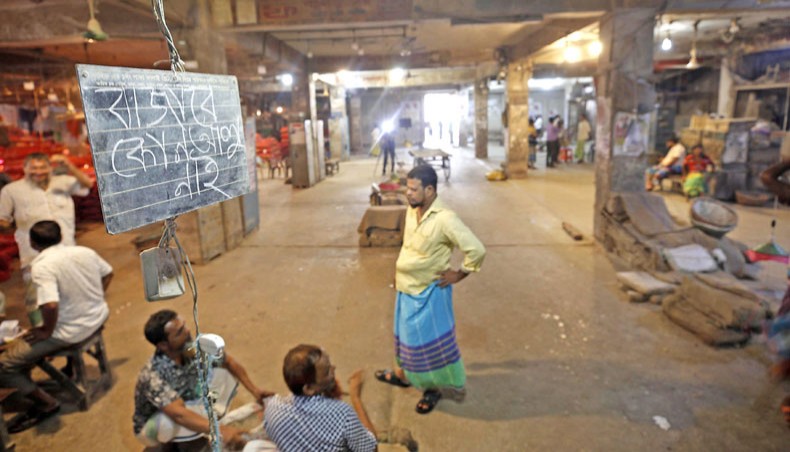 A section of Karwan Bazar in Dhaka where potatoes are sold wholesale falls vacant on Tuesday after traders stopped sales though the government reset the price of per kilogram potato at Tk 35 raising it from Tk 30 a kg. Report on page 1 — Sourav Lasker

The government on Tuesday revised up the retail potato price by Tk 5 to Tk 35 a kg a day after sale of the item was suspended at wholesale markets amid the unexpected price hike of the commodity.

Following a meeting with the traders and cold-storage owners, the Department of Agricultural Marketing announced the new price of potato in response to the traders’ demand.

In the meeting at the DAM office in the city, the wholesale price of potato was raised to Tk 30 a kg and the cold-storage-gate price to Tk 27 a kg, according to a press release issued by the department.

The department under the agriculture ministry asked the district administrations to enforce a strict monitoring in the market so that traders sold potato at the rates set by the government.

Earlier, the department on October 7 had fixed the maximum retail price of the item at Tk 30 a kg to check the price spiral when it was retailing for Tk 40-Tk 42 a kg.

The DAM at the time had also fixed the wholesale price of potato at Tk 25 a kg and the cold-storage-gate price of the commodity at Tk 23 a kg.

Though the government had set the prices, potato was selling at Tk 45-55 a kg on the pretext of high prices of the item at the cold storage level.

Potato almost disappeared from the city’s kitchen markets on Tuesday as the wholesalers stopped selling the item from Monday protesting at the drive of law enforcement agencies in the market.

Wholesalers at the city’s Karwan Bazar said that they had no stock of potato as the traders were not buying the item from cold storages due to high prices.

‘The government had set the potato price at Tk 23 a kilogram at the cold storage level but it was being sold at Tk 35-38 a kg there. It is not possible for the wholesalers to sell the item at Tk 25 a kg after buying it at Tk 38 a kg,’ Mosharraf Hossain, a wholesaler, told New Age on Tuesday.

He said that they were forced to buy potato from cold storages at higher prices and at the same time traders were facing mobile courts.

Maksud Alam, a retailer at Mohammadpur Nobodoy Bazar, said that there was no potato at kitchen markets as wholesale supply remained halted.

He said that wholesalers at Mohammadpur Krishi Bazar kept no stock of potato due to high prices at the cold storage level and to avoid mobile court.

Traders started increasing the price of potato from the first week of this month and the commerce ministry asked the Department of National Consumer Rights Protection to ensure the government-set prices.

Commerce minister Tipu Munshi on Sunday announced that the Trading Corporation of Bangladesh would immediately start open-market sale of potato at Tk 25 a kg to ensure supply of the item to consumers at an affordable price.