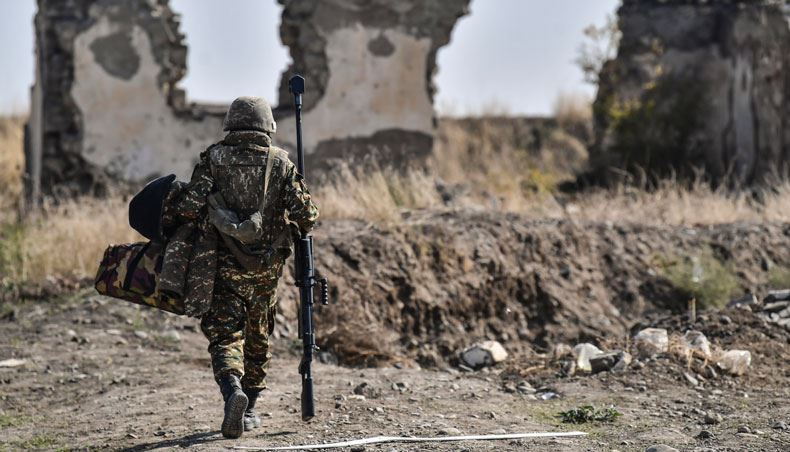 In this file photo taken on October 18, 2020 an Armenian soldier carries his machine gun at the front line as troops hold positions during the ongoing fighting between Armenia and Azerbaijan over the disputed region. — AFP photo

United Nations Security Council members called on Armenia and Azerbaijan to respect a new ceasefire in Nagorno-Karabakh during a meeting on the disputed region on Monday.

The council held closed-door discussions on the fighting, which had left hundreds dead since clashes erupted on September 27, at the UN headquarters in New York.

During the meeting — which was requested by France, Russia and the United States — the council’s 15 members reiterated a plea by UN chief Antonio Guterres for parties to honour a new ceasefire.

‘Everyone was saying the same thing – the situation is bad and both sides need to pull back and heed the secretary-general’s calls for a ceasefire,’ a UN diplomat told AFP.

Russia, which currently holds the council’s rotating presidency, is working on a statement that would call for adherence to the ceasefire, diplomats said.

The text — which was expected to be agreed between council members this week — will also call on Armenia and Azerbaijan to resume negotiations facilitated by the Minsk Group.

Russia, France and the US chair the Minsk Group, which was created by the Organisation for Security and Co-operation in 1992 to find a solution to the territorial conflict.

Nagorno-Karabakh was a breakaway region of Azerbaijan mainly inhabited by ethnic Armenians and backed by Armenia.

Armenia and Azerbaijan, two former Soviet republics in the Caucasus, have fought sporadically over the region since the collapse of the Soviet Union.

Ethnic Armenian separatists seized the Nagorno-Karabakh region from Baku in a 1990s war that claimed 30,000 lives.

The United Nations passed four resolutions on the conflict in the early 1990s.

The current fighting was the worst in the decades-long dispute since 2016.

The new ceasefire, backed by international mediators, was struggling to hold on Monday as both sides accused each other of fresh attacks.

It was the second agreed after a previous truce thrashed out in Moscow earlier this month never showed any sign of seriously holding.