Mahmudullah guides his XI to victory 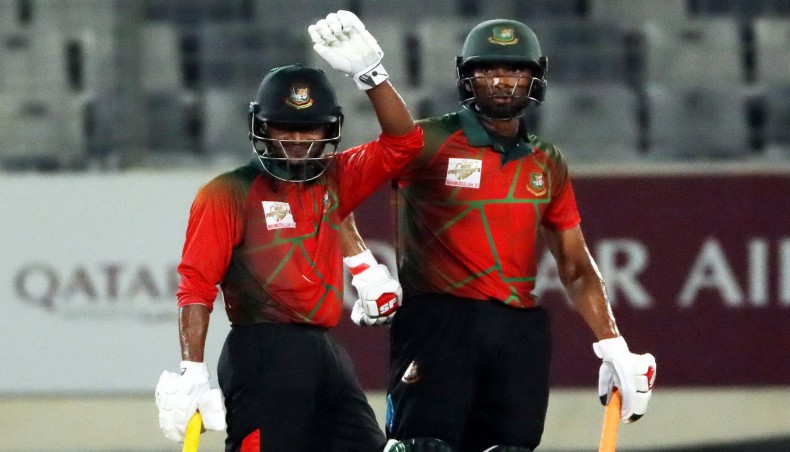 Mahmudullah hit a captain’s knock to guide Mahmudullah XI to a four-wicket win over Tamim XI in their last group-stage match of the BCB President’s Cup on Monday, which keeps them in contention for a spot in the final.

Batting first, Tamim XI was reduced to 17-4 inside nine overs with Rubel claiming three of the wickets and Abu Hider picking one.

Yasir and Mahidul then steadied the innings with a 111-run stand for the fifth wicket but their partnership ended in the 36th over when the former was run out by Liton Das.

Rubel picked his fourth wicket in the match to dismiss Mahidul in the 41st over but Mosaddek Hossain (40 off 39 balls) and Mohammad Saifuddin (38 off 29 balls) added 75 runs off 56 deliveries for the seventh wicket to take Tamim XI to a respectable total.

Chasing 222, Mahmudullah XI lost both openers in 1.1 overs but Mahmudul, who was part of the Under-19 World Cup winning side, and Imrul added 84 runs for the third wicket to bring their innings back on track.

After their dismissal Mahmudullah formed a 65-run stand with Nurul Hasan to take his side just nine runs away from victory before perishing off Saifuddin in the 47th over.

Saifuddin struck again in the penultimate over to remove Sabbir Rahman for three but Nurul and Mehedi Hasan remained unbeaten on 26 and 0 respectively to see their side through.