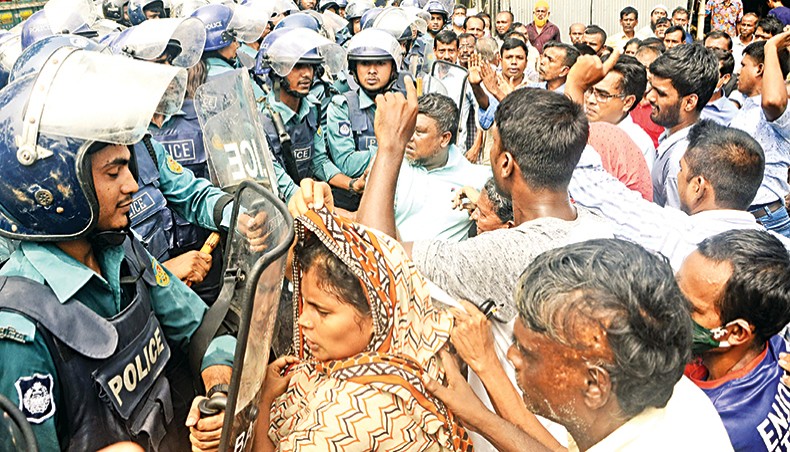 At least 50 people were injured on Monday at Atra Industrial Area in Khulna during the road blockade enforced by the Left Democratic Alliance and other progressive organisations at the jute industrial belts and jute cultivation areas in the country.

Workers and leaders claimed that a clash broke out during the programme between police and protesters as the former attempted to remove the protesters blockading the Khulna-Jashore highway at Eastern Jute Mill gate point of Atra Industrial area in Khulna.

New Age Correspondent in Khulna reported that at least 50 people, including nine police personnel, were injured in a clash between  police and protesters that had blocked the Khulna-Jashore highway at Eastern Jute Mill gate point of Atra Industrial area under Khanjahan Ali police station in Khulna in the morning.

Eyewitnesses and demonstrators said that over 1,000 jute mill workers, civic group leaders and left-leaning political activists, under the banner of Patkol Rokhkhay Sammilita Nagarik Parishad, blocked the highway at about 11:00am and a huge number of police cordoned the protesters and asked them to leave the spot.

As the protesters denied, police began to charge baton on the demonstrators at about 11:30am to disperse them and the agitating workers began to throw brickbats at police, they said.

They also added that the police lobbed teargas shells on the demonstrators and also fired rubber bullets.

They alleged that the leaders and many of the workers took shelter in the adjacent workers’ colony where police entered and beat up the inmates.

The parishad’s acting member secretary Janardan Dutta Nantu claimed that at least 50 of their leaders and activists were injured in the police attack that lasted for about half an hour and the injured were taken to different hospitals and clinics for treatment.

Khulna Metropolitan Police’s deputy commissioner (north) Molla Jahangir Hossain claimed that a huge traffic jam at both the ends compelled the police to request the demonstrators to leave the spot.

But, they tried to vandalise the buses and cars and began to throw brickbats at police when police charged baton, lobbed tear-gas shells and shot two rounds of rubber bullets in self-defence, he claimed and added that they did not beat anyone up in the workers’ colony.

He denied giving names of those detained by the police.

Khanjahan Ali police station inspector Kabir Hossain said that a case was under process against them for attacking police and obstructing them from discharging duties.

The LDA called the demonstration on October 6 to press home their demands that include reopening of all the closed 25 state-owned jute mills immediately, modernisation of the mills, payment of all the dues to the workers, bringing the persons responsible for losses in the mills to book and announcing lowest wages for jute sector workers.

The left leaning organisations have long been protesting against the government’s closure of the country’s state-owned jute mills which was eventually implemented on July 2, rendering about 50,000 workers jobless overnight.

In Dhaka, LDA began its rally at the busy Paltan intersection at about 11:30am and, as the news of Khulna attack on the blockade reached the venue around noon, the protesters blocked the intersection with fences commonly used by the police.

A huge traffic gridlock choked the roads in the area until the scheduled blockade ended at 1:00pm.

Addressing the rally, the speakers condemned the police attack on campaigners during the Khulna blockade programme and alleged that the government had closed the mills to hand them over to the private sector, especially to people loyal to the ruling Awami League.

They alleged that the privatisation of the state-owned jute mills went against the spirit of the liberation war and that the government, like their predecessors, including the governments led by former military dictator HM Ershad and Bangladesh Nationalist Party chairperson Khaleda Zia, betrayed the people by going against the spirit of independence by closing state-owned jute mills.

Addressing the rally as the chair, LDA coordinator and Communist Party of Bangladesh leader Abdullah Al Kafi Ratan announced to hold rallies in all divisional headquarters and mass communication in the districts where there are jute mills and jute cultivation areas to drum up public support in favour of their demands.

The LDA announced a countrywide demonstration for today protesting against the attack and the arrest of their leaders.