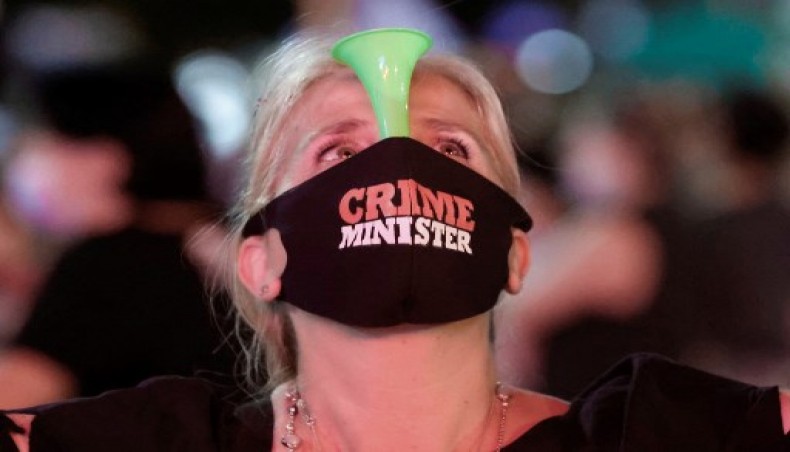 An Israeli protester, wearing a protective mask due to the COVID-19 pandemic, blows a plastic horn during a demonstration against Prime Minister Benjamin Netanyahu in the coastal city of Tel Aviv, on October 17, 2020.- AFP photo

Israel and Bahrain will officially establish diplomatic relations on Sunday at a ceremony in Manama, an Israeli official said, after the two states reached a US-brokered normalisation deal last month.

A visiting delegation from Israel and officials in Bahrain will sign a ‘joint communique (that) is the establishment of full diplomatic relations,’ an Israel official in Manama told reporters.

Once the text is signed at a ceremony scheduled for Sunday evening, Israel and Bahrain will be free to open embassies in each other's countries, the official said.

The United Arab Emirates and Bahrain became the third and fourth Arab states to agree to normalise ties with Israel, following Egypt's peace deal with Israel in 1979 and a 1994 pact with Jordan.

US Treasury Secretary Steven Mnuchin and special assistant for international negotiations, Avi Berkowitz, are due in Bahrain for the ceremony.

In addition to the joint communique establishing diplomatic ties, Israel and Bahrain are expected to sign ‘six to eight’ MoUs, including on economic cooperation, the Israeli official said.

The official said he could not outline the substance of all the agreements scheduled for signature on Sunday, but security cooperation is likely to feature prominently in bilateral talks.

The Palestinians have condemned the Gulf agreements with Israel as ‘a stab in the back’ for their aspirations to establish an independent state of their own.

The deals mark a distinct shift in a decades-old status quo where Arab countries have tried to maintain unity against Israel over its treatment of the stateless Palestinians.

But key player Saudi Arabia has said it will not follow its allies Bahrain and the UAE in establishing diplomatic relations without a resolution to the Palestinian issue.

Israel's parliament on Thursday ratified the normalisation agreement with the UAE.

A separate vote on the Bahrain pact is expected once the details are finalised.