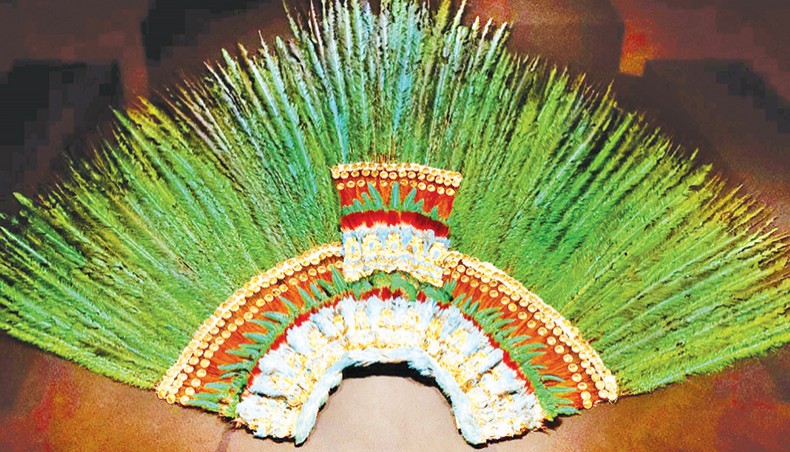 The headdress of Aztec emperor Moctezuma Xocoyotzin (1466-1520) or Moctezuma II, also known as ‘El Penacho’, is displayed at the Museum of Ethnology (Welt Museum) in Vienna on October 15, 2020. — AFP photo

It is one of the star attractions of Vienna’s Weltmuseum, a resplendent ancient Aztec headdress of iridescent blue-green feathers almost two metres (six feet) wide with a centrepiece sporting hundreds of pieces of gold.

This week, a long-running wrangle over where it should be displayed was re-ignited when Mexican President Andres Manuel Lopez Obrador said he had asked his wife to persuade Austrian authorities to allow the headdress to be exhibited in Mexico in 2021 for the country’s celebrations of the 200th anniversary of independence.

‘And during this meeting, she showed a letter from her husband asking for the loan of the feather headdress’.

Schicklgruber says the request is now being studied by the Austrian ministry of culture.

It is not the first such request that Gutierrez has presented during her current trip to Europe.

Last week, she met Italian President Sergio Mattarella and handed over a letter asking for the loan of two manuscripts from the Aztec era, again to be exhibited during 2021.

As far as the headdress is concerned, Lopez Obrador seems to recognise that the request may well be turned down.

‘It is an almost impossible mission, since they (the Austrians) have completely appropriated it,’ he wrote on Twitter earlier this week.

The next day in his daily press conference, Lopez Obrador struck an even more forthright tone on the question of where the headdress belonged, calling it a ‘piece of ours, of Mexico’ and saying the Austrians had ‘seized’ it.

But the Weltmuseum argues that the piece is too fragile to move.

‘We have an Aztec exhibition on show now downstairs and this would fit into that exhibition. But we are not allowed to bring it down, it is really too fragile,’ explains Gerard van Bussel, curator of the Weltmuseum’s North and Central America department.

Schicklgruber says a loan ‘would risk damage that would finally destroy the object’.

Following a study between 2010 and 2012 -- with the participation of experts from Mexico -- both sides agreed that the headdress could not be safely transported.

Since 2017 it has been on display in a bespoke ‘vibration-free’ cabinet.

‘Just consider the fact it is more than 500 years old,’ says van Bussel, recalling that it is the only piece of its kind to have survived from the era of the conquest of the Aztec empire.

Ivan Escamilla, historian and researcher from Mexico’s National University, agrees the piece should not be moved, telling AFP it was ‘a miracle’ for it to have survived for so long.

It is not known for certain how the headdress ended up in Europe, but van Bussel says the first recorded mention of it is in an inventory of a Habsburg collection in Austria’s Tyrol region in the late 16th century, around 75 years after the conquest of the Aztec capital.

From there it wended its way through different Austrian collections before landing in the Weltmuseum.

As for why Lopez Obrador had chosen to return to the controversy now, experts in Mexico say he may be playing to a domestic gallery.

‘Lopez Obrador plays with symbols and this is one of them,’ says historian and political analyst Jose Antonio Crespo.

The symbolic value of the headdress is all the more potent because it is sometimes assumed to have been worn by the Aztec emperor Moctezuma -- even if van Bussel cautions there is no proof of this.

But the issue also has a wider significance as debates rage elsewhere over the ethics of museum collections -- particularly those located in former colonial powers -- and how they were assembled.

While it is doubtful that the headdress will be going anywhere any time soon, the Weltmuseum has at least taken one step to making it more accessible to a Mexican public.

For those who can make it to the Austrian capital, Mexican citizens have had free entry to the museum since 2012.