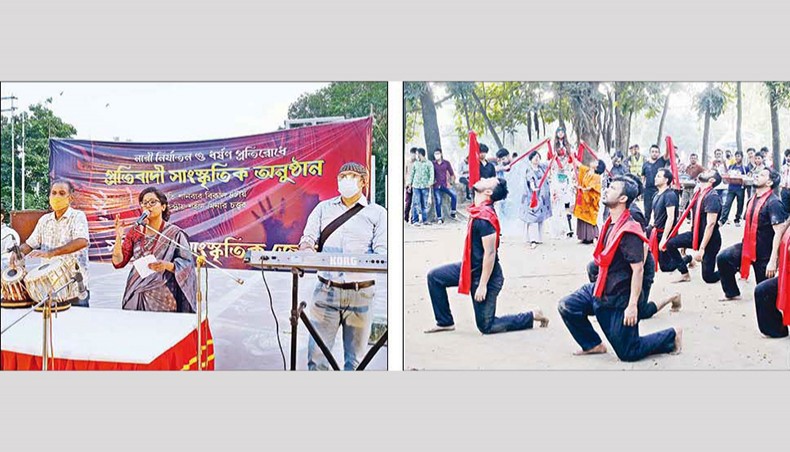 Theatre troupe Nat Nandan staged a street play titled ‘Deyaler Kanna’, which has been written and directed by Asma Akter Liza. The play is an interrogation of the current situation where rape and violence against women have become rampant. The play also focuses on the role of the law enforcement agencies and the social condition created in the last few years which only perpetuated the injustices against women multiplying the sufferings of the rape victims and their families.

Sammilita Sangskritik Jote president Ghulam Quddus said, ‘Our country has been founded on the basis of nationalism, socialism, democracy and secularism but different social issues including violence against women are interrupting our country’s progress. We arranged this programme to ensure women’s rights in our society. Cultural activities can motivate people to raise their voices at violence against women and social anomalies. I also want to thank the government for passing a new law to ensure women’s rights. I urge the authorities concerned to implement the law properly,’ said Ghulam Quddus.

SSJ will organise cultural programmes protesting at rape and violence against women on Saturday from now on.

Besides, different cultural organisation arranged special programmes across the country under the banner of SSJ on Saturday.

Theatre troupe Prachyanat staged a play titled ‘Sagnkatkal’ at Swoparjito Swadhinota Chwattar premises. It has been written and directed by Andolon Mithun. The play depicted social issues and violence against women including religious prejudice, corruption, rape and others.