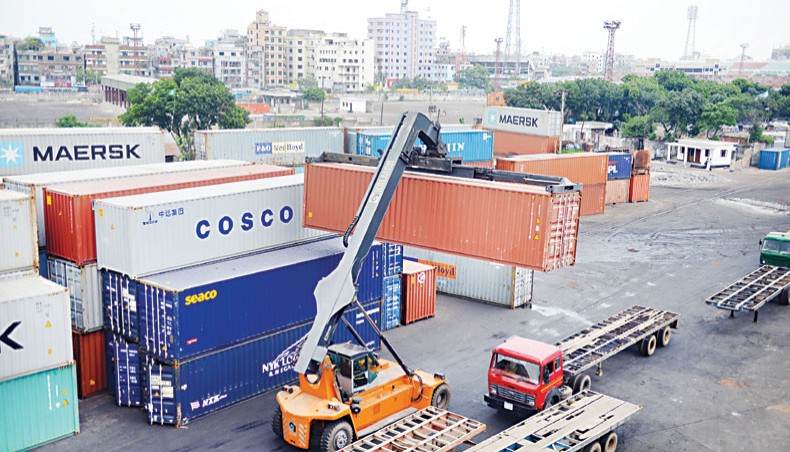 A file photo shows a crane loading containers at Kamalapur in Dhaka. The government has taken an initiative to frame new policy guidelines on preferential and free trade agreements incorporating the changed global and domestic trade patterns to ensure the country’s interest in the potential agreements.  — New Age photo

The government has taken an initiative to frame new policy guidelines on preferential and free trade agreements incorporating the changed global and domestic trade patterns to ensure the country’s interest in the potential agreements.

The existing guidelines need to be updated in line with the changed global and domestic economic and trade patterns, they said, adding that a template for the upcoming PTAs and FTAs was also needed to be followed in signing such deals.

Bangladesh has been negotiating to sign PTAs or FTAs with a number of countries, including Nepal, Bhutan, Indonesia and Sri Lanka, to extend its preferential or duty-free market access.

Trade negotiators are close to signing PTAs with Bhutan and Nepal.

The cabinet on September 14 approved a draft PTA with Bhutan, the first country with whom such a bilateral preferential trade agreement is to be signed.

The government is also examining the possibility of entering into either an FTA or PTA with a number of countries, including Vietnam, Thailand, Morocco, Malaysia, the United States, Japan, Canada, Senegal, Nigeria, Kenya, South Korea, India, Saudi Arabia, South Africa, Mexico and Egypt, and three regional blocs that include the Gulf Cooperation Council, the Eurasian Economic Commission and MERCOSUR.

The country, however, is not part of any bilateral PTAs or FTAs.

Trade officials and economists have now been emphasising for a while the arrangement of FTAs or PTAs with major trade partners for continuation of duty-free market access and preferential trade benefits even after the country graduates from the least developing country status.

Bangladesh is supposed to graduate from the LDC status in 2024 and may lose the duty-free export facility three years after the graduation, they said.

Only FTAs and PTAs with potential trade partners may extend the benefits, they added.

Although the country managed to increase its market access and boost export in developed countries, including the US, the United Kingdom and other European and Asian countries, market access has not sufficiently increased in developing countries.

Rather, Bangladesh is facing stiff competition on these markets with rival countries that are part of FTAs with the developing countries.

On the other hand, Bangladesh’s exposure to trade and services is also lower compared with its contribution to the gross domestic product.

Entering into FTAs and PTAs with potential trade partners will enhance its market access along with boosting export of diversified products and increasing trade competitiveness, a senior trade official said.

It will also play a vital role in attracting foreign direct investment, developing the service sector and in creasing manpower export besides strengthening economic and political ties with partner countries, he said.

He said that the objectives of the guidelines would be to provide a framework for identifying potential countries for signing FTAs and PTAs with, coverage of both goods and services under the agreements and procedures to be followed for negotiations on the deals.

As per the 2010 guidelines, the coverage of FTAs mainly focused on goods and services.

But the global situation has significantly changed by now as many countries, particularly the developed ones, are emphaising some new issues, including intellectual property rights, technology and environment.

The country should prepare the guidelines by taking these issues into consideration, he said.

Tariff commission officials said that they would prepare the draft after analysing existing guidelines from home and abroad and forwarding it to the ministry for finalisation.