No intra-Afghan talks likely unless Ghani steps aside 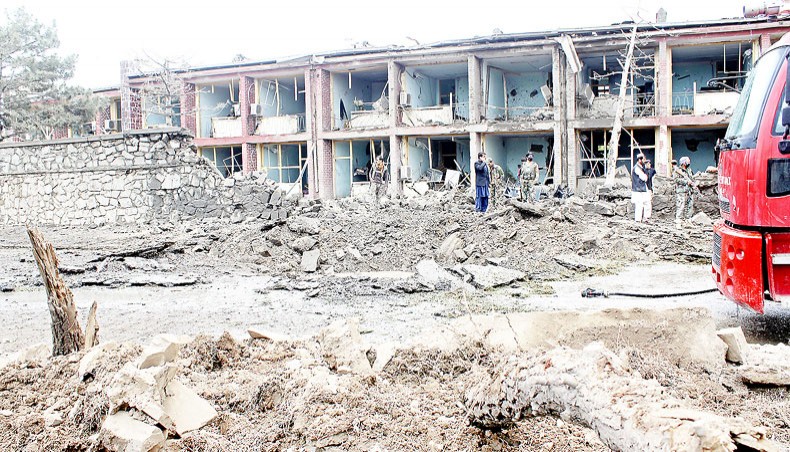 In this file photo, Afghan security personnel inspect the site of an attack on Afghan army base in Gardez, capital of Paktia province on May 14. — Agence France-Presse/STR

PRESIDENT Donald Trump and his national security adviser, Robert C O’Brien are aching to announce troop withdrawal from Afghanistan as a last minute sweetener for the American voter, rather like floral touches in an Indian wedding. General Mark A Milley, chairman of the Joint Chiefs of Staff, is probably looking at life beyond Trump, unless there is a second coming. He is talking of ending the Afghan war ‘responsibility’, which means ‘not in a hurry’.

When president Barak Obama had set firm deadlines for withdrawal, I made an extensive survey of the country for the Observer Research Foundation. I had concluded that the US is ‘not leaving Afghanistan today; it is not leaving it tomorrow.’ A superpower enters a major theatre with one set of interests but, over a period of time, develops multiple compelling interests.

Why would a country, which is directly involved in 14 shooting wars in various parts of the globe, walk away from its longest war ever without any identifiable gain. Withdrawing empty handed would be an admission of defeat. Since this is not on the cards, the only conclusion one can draw is that a plan for the future is not being disclosed for now.

US involvement in Afghanistan has been a great tragedy, but its frequent false starts in a rush to the exit door and announcement of withdrawal, is material for a spoof by someone like Michael Moore. Take for instance the peace agreement the US signed with Afghan Taleban on February 29 in Doha. So eager was US negotiator Zalmay Khalilzad to flourish a peace agreement just when the election campaign in the US was picking up, that he would have inserted into the agreement anything the Taleban wished. Read the title headline of that agreement: it is patently absurd.

‘Agreement for bringing Peace to Afghanistan between the Islamic Emirate of Afghanistan which is not recognised by the United States as a state and is known as the Taleban and the United States of America.’ The fragility of the agreement is transparent in the pulls and counter pulls that have obviously gone into the headline. There is unbridgeable distance on the Afghan president Ashraf Ghani’s role, for instance. The Taleban will not talk to Ghani whom they describe quite brazenly as a US ‘toady’.

Ghani deludes himself if he imagines he is being ‘firm’. He is coming across to the world at large as a leader with a very thick skin. New Delhi wishes to keep appearances. In the trapeze act, South Block does not wish to be seen loosening the clasp of Ghani’s hand mid-air. The zero sum game with Pakistan may operate as a factor but, in deference to realism, not a defining one.

If New Delhi is seen to be digging in for Ghani, it will only find itself embarrassed down the line because it is clear as daylight that intra-Afghan talks will not move unless Ghani steps aside. By visiting Islamabad and New Delhi Abdullah Abdullah is positioning himself to step in as soon as the opportunity arises. This is not a process that is likely to reach fruition before the end of the year. So, no confetti on election eve.

One of the advantages the US extracts from its position of being a superpower is to keep making mistakes almost wilfully without any fear of being called to account. It is almost a forgotten story that in December 2001 NATO, helped by Russia, Iran, India and the Northern Alliance, headquartered in the Panjsher valley defeated Taleban and Al Qaeda. Punjsher was also the operational headquarters for the Tajik hero Ahmad Shah Masoud. So strong was Masoud’s opposition to the Taleban and Al Qaeda that he travelled extensively to acquaint various international fora of the danger that Al Qaeda and Taleban posed to Afghanistan. His address to the European Parliament in the summer of 2001, months before 9/11 was historic by any yardstick. Complete silence on this speech of Masoud’s is surprising. His forces had picked up chatter about a possible Al Qaeda action in the American mainland. He was speaking in Brussels. On September 9, precisely two days before September 11 (9/11) two Arabs, disguised as journalists, visited him in his hideout near the Tajik border for an interview. Their passports, it was revealed much later, had been forged in Brussels. These ‘journalists’, while saying goodbye to Masoud, detonated their vests. All three died instantly. Two days later, the twin towers came down in New York. Is there nothing here that deserves investigation?

Maybe not before the US elections, but is the curtain about to be brought down on US involvement? Whether Trump or Joe Biden wins the election, China, Russia and Iran are likely to remain America’s adversarial concerns.

A little over a year ago, just when US military involvement in Syria was winding down, one common chatter was about Jabhat al Nusra and its variants being flown to newer theatres of action. Russia’s deputy minister of foreign affairs Morgulov Igor Vladimirovich told a high powered conference in New Delhi, with Zalmay Khalilzad in attendance, that militants were being flown from Syria to Northern Afghanistan. ‘Only the Afghan government and the US control the Afghan air space.’ The blame cannot be placed at any other door. Khalilzad mounted a token protest but nothing more.

The following Friday Iran’s supreme leader, Ali Khamenei was more specific: Daesh groups were being flown to Afghanistan. The distinguished chronicler of the West Asian scene, Robert Fisk of the Independent made similar allegations. The allegation fitted neatly into the thesis that militants, trained to kill, cannot be sent to the slaughterhouse. They have to be deployed in other theatres where they are proximate to Muslim population into which militancy has to be injected to stir up the Islamic cauldron — Xinxiang, the Caucasus and a handful of Sunni enclaves in Iran.

Saeed Naqvi is a senior Indian journalist, television commentator, interviewer, and distinguished fellow at the Observer Research Foundation, New Delhi. He is the author of ‘Reflections of an Indian Muslim’ and ‘The Last Brahmin Prime Minister’ and ‘Being The Other: The Muslim in India’.