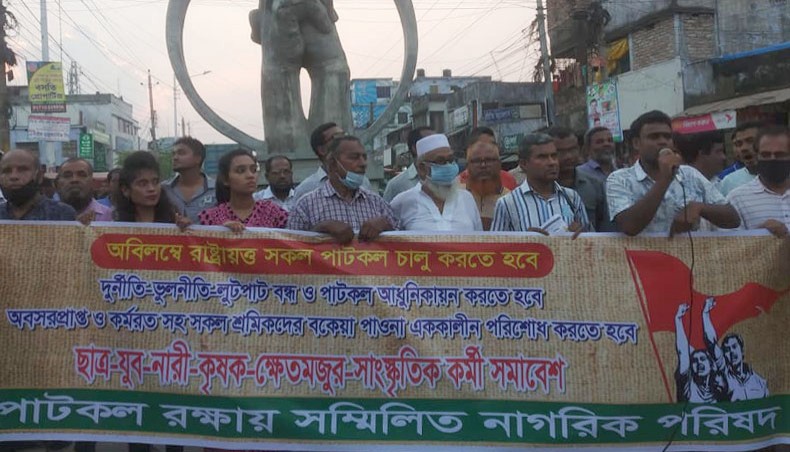 On June 28, the government has announced 25 state owned jute mills closed. Since then jute mill workers are protesting against the decision, students have lent their voice to their struggle. Nahid Riyasad providing a history of the jute sector writes about the workers' plight and student-worker solidary that evolved during the movement

On July 24, when I was taken in police custody for organising public meeting and rallies against the closure of state owned jute mills, few of my comrades came to visit me, they too were also arbitrarily detained.

THIS was one instance when law enforcement agency members harassed the key organisers of protests against the government decision to close down state-owned jute mills. Protests erupted in the south-western industrial district of Khulna when on June 28 government announced 25 jute mills closed.

In an online meeting, the textiles and jute minister Golam Dastagir Gazi announced the government decision to close down the factories. With the decision, 24,886 workers, under the state-owned Bangladesh Jute Mills Corporation sent into forced retirement, in corporate terms, golden handshake.

New Age Youth talked to Atif Anik, the president of the Revolutionary Student-Youth Movement that, among many other student and youth organisations, expressed solidarity with the jute mill workers. He too faced arbitrary detention in recent weeks for his involvement with the movement,

They were taken to the Khulna Detective Branch of Police and locked up for more than eight hours. ‘We were released after 9:00pm. They wanted a statement from us saying that, in future we will not participate in protest and seek permission from police before organising any such protests. We did not give any statement though,’ he said.

Why and how the students of Khulna are enduring repression from the police to show their support for jute mill workers. Student-workers, although historically celebrated, it is not that common in present struggles. The Students’ Federation of Bangladesh Khulna chapter convener, Al Amin Shaikh explains, ‘Khulna is traditionally an industrial town. This history has influenced the social fabric in which workers are integral part of local community. Inevitably, students, youth political organisations are accustomed to extending solidarity with the industrial workers and that is how students are so passionately involved with the on-going protests against the government decision on the closure of jute mills.’

The truth of this observation can be found when on June 29, hundreds of school students gathered with their jute industry worker parents at nine jute mills of Khulna demanding to reopen the government jute mills.

The history of Bangladesh jute industry, nationalisation, (re)privatisation and impacts
IMMEDIATELY after the independence, the government nationalised trades like manufacturing, banking, finance, transport and communication thus attaining more than 92 per cent share of the manufacturing sector. Under the project, the state came to own 77 jute mills. The jute industry earned more than 87 per cent of the entire merchandise export sector after independence.

With the political assassination of the founding president of Bangladesh and shift in our political system in 1975, nationalisation policy was reverted, privatisation was progressively introduced. In less than ten years, between 1978 and 1986, 43 jute mills were privatised.

The shift has not been a successful one as a World Bank survey from 1980 showed that nearly 50 per cent (245 out of 497 small industrial enterprises, excluding large jute and cotton textiles) enterprises were closed, then reopened under private ownership.

Media reported how the privatisation process was not transparent as there were no open bidding system and the evaluation of the interested private parties were vague. State-owned enterprises were shown as loss projects right before any attempt at privatisation. They were sold at significantly low prices what many experts termed as a nexus between the private owners and the policymakers.

The social impacts of the then privatisation are also important as the industry is facing a similar situation. More than 89,000 workers were laid off during the 1995-97 period. Binayak Sen, in a research found that, more than 40 per cent of the workers, who used to work in the state enterprises, had lost their jobs because of the privatisation.

A 2010 survey conducted by Bangladesh Privatisation Corporation on the privatised organisations showed that between 1993 and 2010, at least 75 industries were handed over to private owners and 31 of them were found closed during the survey.

Why are the workers against privatisation?
NEW Age Youth talked to few jute industry workers and students leaders of the on-going movement to understand the salary and benefits gap between the state-owned and private jute factories. The differences can be categorised under five categories — salary, job security, work environment, benefits and compensation.

A government jute mills employee gets Tk 575-800 as their daily wage but they can withdraw the amount weekly. Private jute mill workers salary range in Tk 150-250 and less than one per cent get Tk 300 daily.

Private sector workers have no job security and can lose their job at any time without any explanation. Workers of state-owned mills have the rights to go to court.

The work environment is a major factor to understand the workers opposition to privatisation effort. The workers from state-owned factories can take a 5-10-minute-break after every 30 minutes shift. Akij is the largest jute factory at this moment. A worker from there seeking anonymity told New Age Youth that they get a 20-minute break in an eight-hour shift. Even a two minute extra time will result in fines.

Private sector workers are not familiar with the idea of benefits as only public sectors workers get provident fund and gratuity. Besides, government sector workers enjoy medical allowance, housing facilities and their children get schooling. On papers, there are wide gap in employment benefit available for workers in public and private sectors.

When it comes to compensation if the worker meets an accident at the workplace, there is no structured compensation package for the private sector workers. For the government sector, there is a structure on which the lost productivity of injured workers is counted in monetary terms. In one scenario, a 16-year boy lost his left hand on the line of duty at a private jute mill and the authorities sent him home with Tk 2000 and that was the end of his job there.

Another major drawback is the non-existent right to unionise. Only a few mills, such as Akij have unions but the leadership positions are given to workers close to the owner and mill owners.

The laid-off workers due to the closure are concerned about their compensation and dues. Moreover, the workers who retired in recent years are yet to get their dues.

‘The workers will get their lawful benefits in phases over three months and the first instalment will be disbursed by the first week of September,’ Golam Dastagir said on June 28.

However, in the second week of October, the dues are yet to be cleared.

The minister mentioned that in the last few years, more than nine thousand workers retired who will also get their dues.

It is also mention worthy that even though the government workers enjoy specific regulations on paper when it comes to compensation but they are not much better-off than private sector workers.

The current conditions
SINCE its inception in 1971, Bangladesh Jute Mills Corporation has endured more than Tk 11,000 crore in losses and deposited profit in only four fiscal years, the latest in 2010-11. In the last decades, BJMC conceded Tk 3842.54 crores in losses. Officials told the media that this year’s loss will cross Tk 500 crore.

The reasons for the huge losses are corruption, poor purchasing decisions, unable to secure global contracts, poor management, dated infrastructure and old technologies. The concerned authorities, however, are blaming the salaries and benefits of the workers thus high production costs The ground-level workers are not, directly or indirectly, involved in any of the aforementioned drawbacks.

When globally researcher, scientists and activists are promoting jute as alternative to the uncontrolled use of plastic and synthetic fibre, the government decision to close down jute mills seem unwise. The policymakers of most of the countries are searching for environment-friendly options and jute is used to produce bio-degradable alternatives. International demands also translate the shift — in the first 11 months of the current financial year, exports in this sector increased by 23.49 per cent and hit USD 817.97 million marks.

The jute exporting industry in Bangladesh is also doing excellent. When all the industries have deposited negative growth, as of May, the jute industry has 5.74 per cent growth rate.

In a separate meeting with the state minister for labour, Monnujan Sufian, the labour leaders presented their case on June 28. The Patkal Sangram Parishad convener Shahidullah Chowdhury after the meeting told the media, ‘We proposed to invest Tk 1,000 crore to make the state-owned mills profitable by introducing modern machinery’.

Why is the government, instead of plugging the holes, choosing to privatise the last 25 state-owned jute mills? From the growth of the industry and increasing international demands, it is apparent that the private sector is and will do big businesses. The lucrative profit the private mills are bagging is, as collected from the workers, are results of exploitation.

The government’s reluctance to hold meaningful talks with the workers, repression on the leaders and police aggression on the protesters are indicating that the power quarters are very interested to hand the state property to private owners thus allowing them to rip the profit and deprive the workers.

There is also a little ray of hope that the youths are not as gullible as the authorities think as the students are marching side by side with the workers lending their voice to jute mill workers causes.