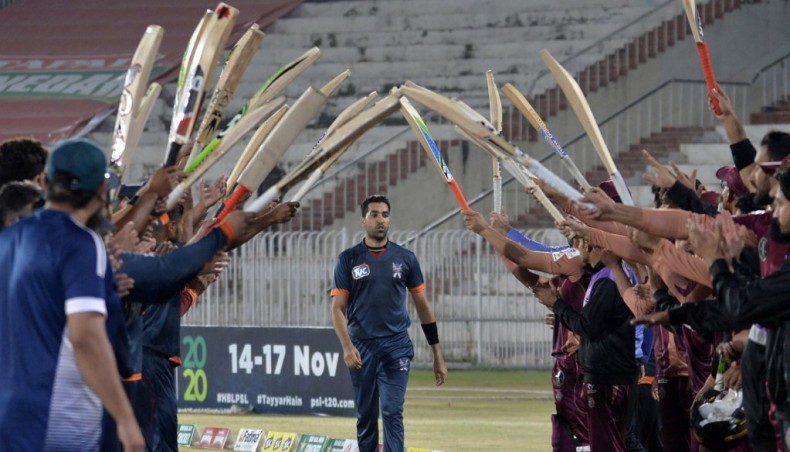 In this picture taken on October 16, 2020 shows team-mates and opponents give a guard of honour to Pakistani cricketer Umar Gul (C) during the National T20 Cup in Rawalpindi. — AFP photo

Pakistan bowler Umar Gul, who earned the nickname 'Gul-dozer' for his rattling of stumps, has called time on his 17-year cricket career.

With no crowds to bid farewell to the national hero because of coronavirus restrictions, the Twenty20 World Cup winner bowed out to a guard of honour from teammates and opponents after his final match -- a disappointing defeat -- in Rawalpindi on Friday.

‘I want to be remembered as someone who tried his best for the country and it's flattering that I was called 'Gul-dozer' during this memorable journey in cricket,’ the 36-year-old told AFP.

It was a topsy-turvy journey for Gul, whose affair with cricket began on the crowded streets of Peshawar.

It was like the baton of swing bowling had been passed from one generation to another, Gul recalled.

‘It was tough to fill those shoes but I tried my best and it was great to lead Pakistan to the final of the Twenty20 World Cup in 2007 and then to the title two years later,’ he said.

He finished with 163 Test and 179 ODI wickets, but he achieved his greatest success in Twenty20 cricket, the start of his career coinciding with the launch of the shortest format in 2003.

Gul was at his destructive best in England in 2009, finishing as the top wicket taker of the Twenty20 World Cup with 13. That included a mesmerising five wickets for just six runs in the semi-final win over New Zealand.

‘Winning the World Cup was the highest point of my career,’ he said. ‘I remember those were very tough days and there was unrest in our country so our win brought smiles back on the faces.’

At the time, Pakistan's military was fighting an insurgency from militants in the northwestern region of the country.
Gul attributes his Twenty20 skills to the early days of his love for the game.

‘I grew up playing 20-20-over matches in the streets and then Ramadan cricket where you look for wickets in a 20-over innings,’ he said.

But his baptism was in Test cricket, where he became an instant hero in 2004.

In only his fifth Test, Gul destroyed a star-studded Indian batting order in a Lahore Test with figures of 5-21. His victims included the great Sachin Tendulkar, Rahul Dravid, Virender Sehwag and VVS Laxman.

The feat almost halted a burgeoning career, causing a stress fracture in his back.

He later featured in the inaugural Indian Premier League in 2008, topping the chart for the Kolkata Knight Riders with 12 wickets in six games -- the only time Pakistan players were allowed to feature in the world's most lucrative league.

But the 2011 World Cup semi-final against India -- in the one-day format -- turned out to be the most bitter of his career.

He was targeted by the top order and finished with figures of 0-69 in eight overs for the match in Mohali, India.

‘Before that match I was the top wicket taker for my team so India targeted me and to add to that we lost that match,’ Gul reminisced.

With his playing years now behind him, next for Gul is a move into coaching: ‘I will try to make new Bulldozers for my country… it is my duty to the nation.’