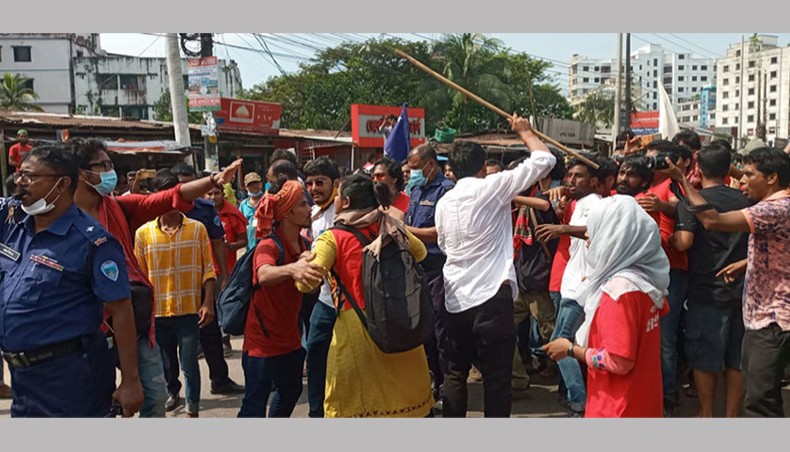 The anti-rape long march from Dhaka came under attacks in Feni district town while supporters waiting to receive the marchers at Dagonbhuiyan of the district were also assaulted on Saturday.

At least 35 marchers and supports were injured in two places.

The attacks were allegedly made by leaders and activists of the ruling Awami League and its front organisations Bangladesh Juba League and Bangladesh Chhatra League.

The long march, organised by the platform ‘Bangladesh against Rape and Impunity’, came under attack in the Muktijodhdha Complex area of Feni town at about 12:15pm.

The marchers of the platform, consisting of 16 left-leaning student and socio-cultural organisations, was attacked immediately after they ended their rally on the town’s central Shaheed Minar premises and started marching towards the Shanti Companir Mor area where their buses were waiting.

The platform that had been staging demonstration in the capital’s Shahbagh for 12 days since October 5 protesting against rape and the culture of impunity and pressing their 9-point demands began their march from Shahbagh on Friday morning and reached Feni at night.

The anti-rape long march, participated by about 500 protesters, came under the attack when the police, against the backdrop of unabated rapes, sexual harassment and violence against women, organised rallies across the country to create awareness of the issue.

Besides, various other cultural and socio-political organisations continued anti-rape demonstrations in Dhaka and elsewhere in the country on Saturday for the 13th consecutive day.

Condemning the attacks, different political parties and cultural organisations in Dhaka and elsewhere termed the attacks a cowardly act.

The attacks proved that the ruling AL and the police were patronising the rapists, they said.

Following the attacks and in support of their demands, the 16 organisations’ platform announced that they would hold a countrywide demonstration on October 19 and a road blockade on October 21.

They marchers were carrying placards and posters and chanting various slogans like ‘when humanity is affected, silence is unjust’, ‘end the culture of impunity’, ‘rape and crossfire are the government’s weapons’, ‘say no to blaming of victims’, ‘we want resignation of the failed home minister’, ‘destroy the hands of rapists’, ‘get your eyes checked to see if it is day or night’, ‘bring to book those who create rapists’, ‘we want a rape-free country, punishment of rapists’, etc.

Eyewitnesses said that leaders and activists of the AL, JL and BCL, armed with sticks and iron rods, attacked the marchers, began to hurl abusive words and beat the marchers, including females, indiscriminately in presence of the police.

They said that police and the marchers tried in vain to resist the attackers and that the marchers managed to reach the buses, got on them.

But, the attackers then attacked the buses and vandalised the glasses of all the six buses that carried the anti-rape protesters.

He said that they sent seriously injured Sadia, Imtiaz and Maria to Dhaka by ambulances.

A leader of the Feni SSF unit told New Age that a group of leaders and activists of the local AL and its front organisations, led by Feni Sadar upazila AL general secretary Sushen Chandra Shil, chased and attacked the marchers.

The leader alleged that the marchers caught an attacker named Manik, a close associate of local lawmaker Nizam Hazari’s, but police took him away from the marchers.

Neither Nizam Hazari nor Manik could be reached for comments.

Sushen claimed that marchers made derogatory comments on a festoon having photos of prime minister Sheikh Hasina and lawmaker Nizam Hazari for which common people showed immediate reaction.

He claimed that neither the AL nor any of its associate organisations was involved in the attack.

‘We have been investigating,’ answered the OC, responding to the question whether they could identify the attackers and their political identity.

Almost at the same time at the zero point of Dagonbhuiyan upazila town, a rally of the Left Democratic Alliance waiting to welcome the long march came under attack allegedly by a group of BCL activists in which at least 10 leaders and activists of the alliance were injured, witnesses said.

Upazila LDA coordinator Haradhan Chakrabarty, a physician by profession, said that the injured ones were given treatment at local clinics and alleged that police took no action though BCL men attacked and foiled their rally, injuring 10 of his comrades.

Dagonbhuiyan OC Aslam Sikder claimed that they, on hearing the information, rushed to the spot and brought the situation under control.

Though the long march was scheduled to stop and hold rallies at Dagonbhuiyan and Ekhlashpur, the marchers did not stop there as they needed almost two hours for the treatment of the injured at a private clinic in Feni and later at Noakhali Sadar Hospital, said Anik Roy.

He said that their 160-kilometer long march reached Maijdi of Noakhali in the afternoon and they held the concluding rally at the pre-scheduled spot on the central Shaheed Minar premises in Maijdi.

The speakers condemned the attacks on the long marchers and said that leaders and activists of the ruling Awami League and their front organisations were involved in most of the offences in the country and that the ruling party men mostly enjoy impunity after committing such offences.

In the rally, Mehedi Hasan Nobel, protesting against the attack and reiterating their 9-point demands, announced countrywide demonstration on October 19, road blockade on October 21, and rallies in all the divisional cities throughout November.

The anti-rape agitation has spread across the country after a video of a gang-assault on a 37-year-old woman in Noakhali’s Begumganj upazila went viral on social media on October 4, nine days after a newlywed woman was gang-raped by Bangladesh Chhatra League activists at MC College Hostel in Sylhet on September 25.

Speakers at the rallies condemned the attacks by AL and its front organization leadres and activists and demanded exemplary punishment for the attackers.

They alleged that the attacks proved that the ruling party men were involved in the rapes and violence against women and also have been patronising such offences.

In Dhaka, Kendriya Khelaghar Asar, a faction of the Gono Forum and Juba Jatiya Ganatantrik Party held separate demonstrations in front of the National Press Club and Sammilita Sangskrik Jote held a discussion and cultural event at the Central Shaheed Minar protesting against rape and violence against women.