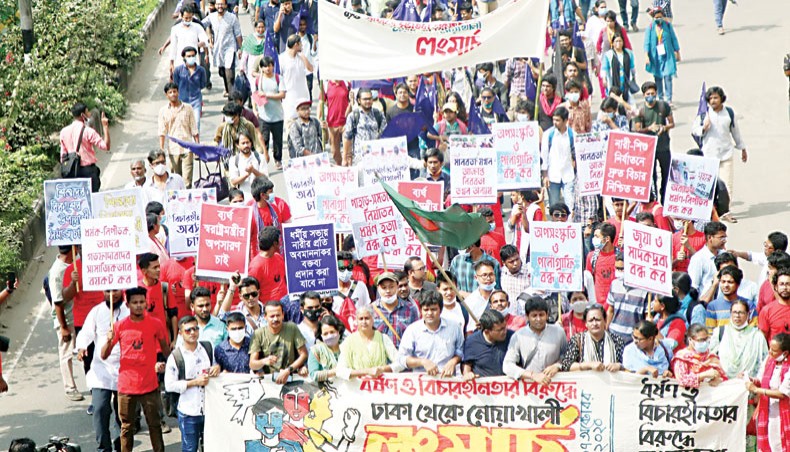 ‘Bangladesh against Rape and Impunity’ begins a long march from Shahbagh of Dhaka to Noakhali on Friday protesting against the countrywide rape incidents. — Sony Ramany

The platform of 16 left-leaning student and socio-cultural organisations — ‘Bangladesh against rape and impunity’ — that has been demonstrating at Shahbagh in Dhaka for 12 days to press for their nine-point demands began their Dhaka–Noakhali long march from Shahbagh at 10:45am on Friady, which reached Feni at night.

The marchers will resume their march after holding a rally at Feni at 10:00am today.

Different student, socio-cultural and political organisations have been agitating against rape, sexual harassment and violence against women in Dhaka and elsewhere in the country on the day for the 12th consecutive day.

Meanwhile, Bangladesh Police announced that they would hold countrywide awareness rallies against the menace today.

Agitators also staged demonstrations at Paltan, in front of the National Press Club and in Waisghat area in Dhaka, and in Narayanganj, Cumilla and Feni on Friday to press for their demands, including an end to the culture of impunity, speedy justice and resignation of the home minister for his failure to contain such offences.

They carried posters and chanted slogans ‘when humanity is affected, silence is unjust’, ‘end the culture of impunity’, ‘rape and crossfire are the government’s weapons’, ‘say no to blaming of victims’, ‘we want resignation of the failed home minister’, ‘destroy the hands of rapists’, ‘get your eyes checked to see if it is day or night’, ‘bring to book those who create rapists’, ‘we want a rape-free country, punishment of rapists’, etc.

The anti-rape agitation has spread across the country after a video of a gang-assault on a 37-year-old woman in Noakhali’s Begumganj upazila went viral on social media on October 4, nine days after a newlywed woman was gang-raped by Bangladesh Chhatra League activists at MC College Hostel in Sylhet on September 25.

About 500 protesters, under the banner of ‘Bangladesh against rape and impunity’, began their march from the capital’s Shahbagh to Maijdi in Noakhali at about 10:45am — sometimes by bus and trucks and sometimes on foot.

Before starting the march they held a rally at Shahbagh demanding an end to rape, sexual harassment and violence against women and a halt to the culture of impunity.

The protesters while advancing to their destination, Noakhali, about 160 kilometers southeast from Dhaka, held rallies on their way at Chashara and Sonargaon in Narayanganj, Chandina under Cumilla and at the Town Hall Maidan of Cumilla city.

The rally at Cumilla city began at about 6:00pm and ended at 8:00pm and the marchers reached Feni at about 9:30pm where they would stay through the night, Bangladesh Students’ Union general secretary Anik Roy said.

He said that their today’s march would begin after holding a rally at the central Shaheed Minar in Feni district town. They would also hold rallies at Dagonbhuiyan, Begumganj and Choumuhoni before reaching Maijdi in Noakhali.

Their 9-point demands include speedy justice, exemplary punishment for offenders involved in rape and violence against women, an end to sexual and social oppression on ethnic-minority women living in the plains and hills, scrapping all the laws and traditions that discriminate against women, ensuring safety and security of the victims and considering village arbitration on rape incidents as a punishable offence.

The demands also include removal of the home minister, the creation of cells against violence against women in all educational and public-private institutions, the inclusion of criminology and gender experts in the Women and Children Repression Prevention Tribunals and an end to the mental oppression on the victims during the investigation.

The protesters also demanded that the Section 155(4) of the Evidence Act 1872 should be scrapped as it stipulated ‘when a man is prosecuted for rape or an attempt to ravish, it may be shown that the prosecutrix was of generally immoral character’.

In the rallies, the speakers alleged that leaders and activists of ruling Awami League and their front organisations were involved in most of the offences and that their protests at different districts were obstructed by police and Chhattra League activists.

Amid the protests, a press release issued by the police headquarters on Friday said that they would hold anti-rape rallies in 6,912 beat-policing areas across the country at 10:00am today.

The rallies will be live-streamed on Facebook, he added.

Jaitiyatabadi Sangrami Dal formed an hour-long human chain in front of the National Press Club in the capital since 10:00am protesting against rape and violence against women.

Centre for Human Rights Movement also formed a separate human chain in front of the National Press Club in the morning protesting against deaths in police custody, violence against women and rapes.

Zia Parishad held a discussion on ‘Rape and corruption spree: Future of Bangladesh’ in the National Press Club in the morning.

Thousands of leaders and activists of Dhaka city unit of Islami Shashantantra Andolon and Samamana Islami Dalsomuho held rallies and brought out processions from the Baitul Mukarrom National Mosque at Purana Paltan after Juma prayers.