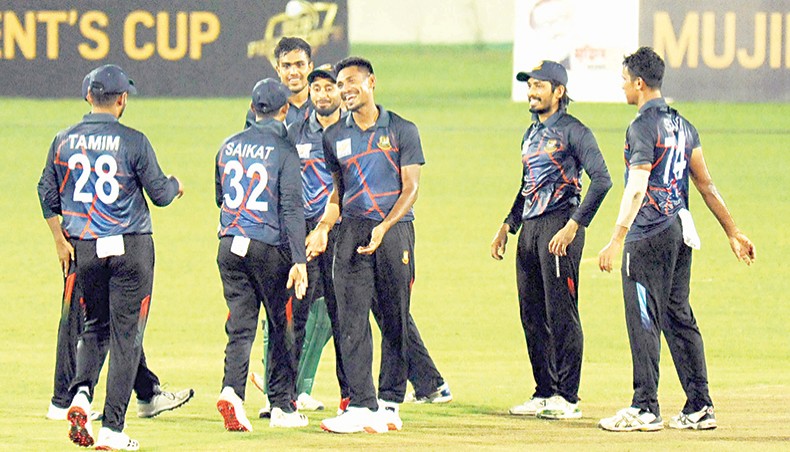 At the halfway point of the group-stage of BCB President’s Cup Bangladesh national team head coach Russell Domingo and chief selector Minhajul Abedin are highly impressed with the pacers, who have been dominant in all three matches of the tournament so far.

The fifty-over tournament, which began on October 11, has been a low scoring affair where the bowlers have dictated the terms and the team score has breached the 200-run threshold only once.

In all three matches, most of the batsmen have struggled to cope with the opposition pace attack and have mostly cut sorry figures.

The wicket-takers list is dominated by the pacers, with Nazmul XI pacer Al-Amin Hossain topping the chart with five wickets, followed by Tamim XI pace trio of Mustafizur Rahman, Mohammad Saifuddin and Shoriful Islam who have taken four wickets each.

Domingo, who is working as a technical expert in the triangular tournament, was pleased with the fast bowlers exploits and hoped that the batters will also up their performance soon.

‘[It has] been hard for batting. But will get better. Bowlers been very good… the pacers are looking good,’ Domingo told New Age on Friday.

Chief selector Minhajul’s praises on Mustafiz, who finished with 3-15 on Thursday against Nazmul XI, for bouncing back from criticism and showing glimpses of his old self.

‘He [Mustafiz] has improved a lot. He not only gave his team a breakthrough, but also bowled in good areas. He has showed why he is rated so highly,’ Minhajul told New Age.

‘It is very difficult to perform while staying inside a bio-bubble because of the stress factor. But with time being everybody is getting used to it. Hopefully he will do better in coming matches,’ he added.

‘Overall everybody is doing well. Shoriful in the last match bowled in good areas. We have given chances to some young pacers. Let’s see how they perform,’ he said.

Domingo, however, refrained from commenting on individuals as he is working as technical expert and overseeing the process of selecting the best player, batsman and bowler in every match. So, he wanted to remain impartial.

Domingo’s fellow coaches in the national team, fielding coach Ryan Cook and bowling coach Ottis Gibson, are also taking part in the tournament as they are working as the head coach of Tamim XI and Mahmudullah XI respectively.

The remaining team, Nazmul XI, is currently being coached by Jafrul Ehsan in the absence of High Performance unit’s head coach Toby Radford, who is still waiting for government clearance to join his team after arriving in Dhaka from the UK on October 11.

All three team have faced off against each other once and currently have two points each after winning and losing one match-a-piece.