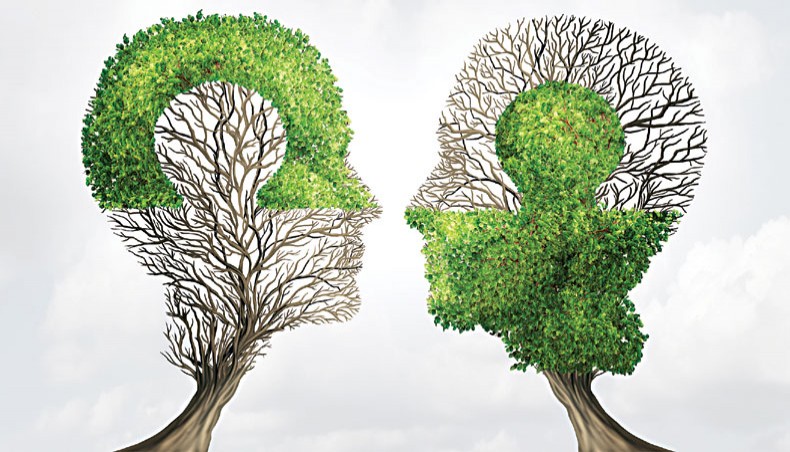 DEPRESSION and anxiety are commonplace in contemporary societies, part of everyday life; celebrities and public figures, British royalty even, talk openly about their struggles with conditions that were hidden and dismissed just a few years ago. Most of us either suffer from one of these debilitating diseases or know someone who does; for huge numbers of people around the world, life has become a kind of agony, something to cope with, a competitive battlefield in which only the few triumph.

Individual stress adds to, and is intensified by, the collective anxiety and tension under which we all live, which in turn exacerbates personal suffering; and so a self-perpetuating cycle of pain and discomfort is created. Divisions along a variety of lines, from income or wealth to ideology, nationality, race and gender are pronounced, fracturing society, feeding fear, fermenting conflict. This fragmentation contradicts the natural unity of life; all of life is connected, an integrated, complex whole with human beings constituting part of the intricately diverse planetary ecosystem, one that, due to ignorance and greed, is being destroyed apace.

Globally the number of people suffering from one or other form of mental health illness is thought to be around 720 million, or a tad over one in ten; among children, the World Health Organisation estimates that, ‘10–20 per cent experience mental disorders.’ Given the stigma (still) surrounding mental health in many countries and cultures, plus the lack of data in developing countries, for example, the figures are no doubt a great deal higher, the problem even more serious, the suffering more widespread.

Anxiety and depression are the most common strains and find focus in relation to a number of areas: economic uncertainty, low self-esteem, self-image, fear of loneliness, fear of failure, environmental worries and others. The pressures to conform and ‘succeed’ are relentless and all pervasive, applied primarily through education, the media, peers and fearful parents who ‘only want the best’ for their children. The whole focus is on becoming something or somebody, instead of being; of allowing oneself to be, and finding out what that is. All of this creates the conditions in which anxiety and depression are virtually inevitable.

There are various conventional treatments for anxiety, depression and related conditions, most commonly counselling and medication (prescribed or self-medicating), and, in recent years, like other so-called ‘spiritual’ practices emanating from the East, mindfulness has become increasingly popular. It is even recommended by the UK’s National Health System. Although only now becoming widely known, mindfulness is an ancient technique, shared by Gautama Buddha some 2,500 years ago (but one that may be even older). It is generally spoken of as a practice — the ‘practice of being mindful’, but being mindful moment-to-moment is closer to an art form than a practice, which implies an action. It is not meditation, but if embraced fully can open a door onto the silence and unmediated relationship that is meditation.

Being mindful is the act of attending to the moment, this moment, then the next, then the next and so on. Paying attention to the various aspects of oneself and the world around us, so that we become consciously aware of: the physical form, that’s our body and the sensory space; emotional movements and reactions; and the activity of the mind, the endless chatter of thinking.

Such attentive observation helps tackle anxiety and depression by focusing the mind in the present moment, and not allowing movement into an uncertain future or a painful past to take place; not by control, but by choice-less awareness — without judgement — of life as it is at any given moment. As the mind moves forwards in time, and away from ‘the now’ we create the conditions in which uncertainty and anxiety can flourish, and when the mind drifts backwards into a past allowing regret, sentimentality or guilt to surface, depression can occur. By being wholly, not partially attentive, and not fragmented, the psychological movement in time ceases. Sustained, and this is key, it is a powerful act that frees the mind from its constant yearning and ceaseless agitation, allowing ‘peace of mind’, or contentment, to naturally occur.

These ‘qualities of being’ — peace, contentment, happiness — are inherent within all human beings, but for most of us, all of us perhaps, they are absent from our lives, replaced by anxiety, desire, dissatisfaction and fear. The socio-economic structure and the ideology of competition and greed intensify such debilitating states.

As well as education, social media and the dominance of screens in the lives of billions throughout the world play a major role in keeping everyone in a state of unease, discontent and mindlessness. Like all areas of consumerism, social media is built on people, or ‘users’ (like drug addicts) as they are called, being in a constant state of inattention and agitated desire, with the forces of competition and comparison, running throughout. Like anxiety and depression, desire, partly functions in relation to psychological time and is a cornerstone of the pervasive economic model. Undivided attention to the activity, thought, feeling (including desire) at hand, negates the power of desire in that moment, and starves anxiety or depression of the conditions needed for their growth.

Like anything, to be potent mindfulness requires consistent application and focused effort; specific periods of concentrated attention during the day are helpful (when, for example, undertaking daily tasks, washing, cooking, dressing, etc.) functioning as reminders and aiding in the establishment of a new rhythm of conscious living. In observing ourselves: the body with its aches and pains, its movements and sensations, fluctuating feelings (observed and not named) and the activity of thought we become mindful, in that moment, of our pre-occupations and of our own conditioning. Everyone is conditioned and all forms of sociological and psychological conditioning, whatever the source, are imprisoning, divisive and fear inducing. Mindfulness allows us to become consciously aware of this false and limited image constructed by and sustained through our identification with the body and thought.

There is, or should be, no goal with mindfulness; there is nothing to achieve or aim at. In the moment of observation, and with consistency, such moments expand, the activity of the body including the mind or brain slow down, and when we slow down the nervous system can begin to settle. Doing things (everyday activities) slowly and mindfully is a powerful tool in bringing relief from anxiety and depression. In a world dominated by divisive modes of living designed to cause discontent, mindfulness creates a space in which awareness can naturally operate, and awareness is a liberating quality and the key to change, individually and collectively.

Dissidentvoice.org, October 10. Graham Peebles is an independent writer and charity worker. He set up The Create Trust in 2005 and has run education projects in India, Sri Lanka, Palestine and Ethiopia.