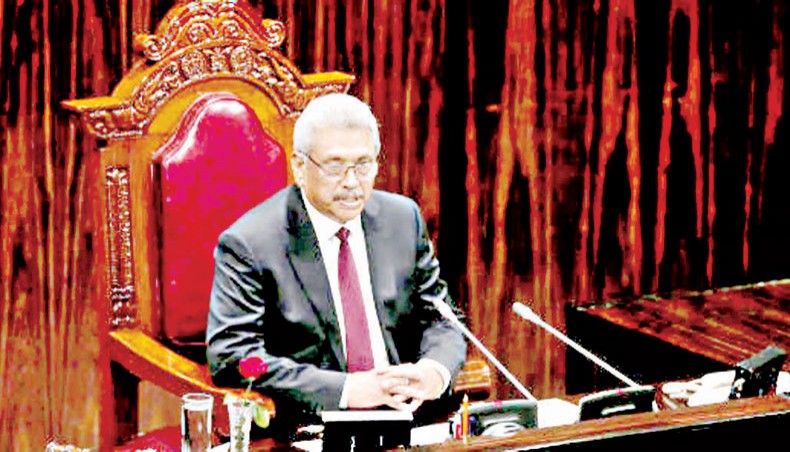 IT HAS taken more than a month for the concerns regarding the proposed 20th amendment that have been expressed by a wide swathe of opposition political parties and non-partisan civil society groups ranging from religious clergy to professional associations to find expression within the ranks of the government parliamentarians. Their silence for so long can only be an indication of the dominance of president Gotabaya Rajapaksa who will be the primary beneficiary. The occasion for the show of dissent came with the seemingly routine release of a suspect detained by the police on suspicion of his involvement in a case in which the police now claimed no evidence had been found. But the fact that the case involved the suicide bombing that claimed the lives of over 250 persons on Easter Sunday in 2019 and led to the collapse of the country’s tourism sector gave both the arrest and the release a significance beyond the ordinary. It is a regular occurrence that people are taken into custody if they are suspected of being involved in a crime, but are released if no evidence surfaces against them. In the case of Riyaj Bathiudeen, however, there was always an element of politics in it. He was arrested a year after the bombings and after there had been a change of government that saw his brother’s political alliance lose power. At the time of his arrest the police claimed that Riyaj Bathiudeen was implicated in the Easter bombing and there was evidence that he had close links with the suicide bombers and had met with one suicide bomber prior to the attack on April 21. Five other suspects, including lawyer Hejaaz Hizbullah who continues to be in detention, were arrested along with him. Even at the time of the arrest, it was surmised that it could have been done with a political motivation of putting pressure on his brother to switch his allegiance to the government. The question is how the evidence that the police claimed was sufficient for an arrest should turn out to be insufficient and why only one person should be released when the others continue to be detained. It is to be noted that the rule of law calls for equity in treatment.

Initially, the most prominent critic of the police reversal was the Archbishop of Colombo Cardinal Malcolm Ranjith who lost more than 200 of his adherents who fell victim to the suicide bombings that occurred in two churches within the Colombo diocese. The cardinal has been persistent in his demand that there should be truth, accountability and justice to the victims and their families who hope that their tears will not be in vain. The Easter bombing in 2019 was a complicated terrorist activity with many elements to investigate as is evident in the personal testimonies being provided these days to the Presidential Commission of Inquiry. The cardinal expressed his dissatisfaction on the release of a key suspect in the case and complained that police itself was contradicting their own statements. He also indicated that the sudden release could suggest a political deal.

The release of Riyaj Bathiudeen without satisfactory explanation has provided government parliamentarians with a justification to unite openly against any possibility of a political deal. In an unprecedented action, 100 of them, which amount to over two-third of the government parliamentarians, have signed a statement calling on the president and the prime minister to conduct a full investigation on this act by the police and to re-arrest Riyaj Bathiudeen and enforce the law in a proper manner. While there is no question about Cardinal Malcolm Ranjith’s commitment to getting to the truth of the Easter bombing and ensuring justice to the victims, the interest of the government parliamentarians is likely to be different. They have made it clear that they would not wish there to be any possibility of a deal whereby his brother Rishad Bathiudeen’s party joins the government to make the two-third majority in parliament easier to reach.

The position of the dissenting parliamentarians will be strengthened by the unexpected intervention of a powerful section of the Buddhist clergy. The Amarapura-Ramanna Samagri Maha Sangha Sabha, the umbrella governing body of two of the three main Buddhist orders, has made its opposition to the proposed 20th amendment very clear and taken the position that the 19th amendment with its focus on institutional checks and balances and support for the independence of key state institutions is more suitable for the country than the 20th amendment. It has further asserted that the proposed 20th amendment ‘is regressive and paves the way for an undeveloped tribal society, that will seriously impede progressive characteristics of human society such as freedom of thought and action, and therefore, the Sangha Sabha decided to make a strong emphasis to the government that they should not pass the proposed 20th amendment.’ The Buddhist clergy have also stated that the country needs a new constitution and not this constitutional amendment.

FACED with pressure from religious and civil society, and his own parliamentarians, president Gotabaya Rajapaksa has hastened to deny that the government has entered into any political deal. He has stated ‘I am not prepared to hand over the power of arresting or arbitrarily releasing people to politicians, as happened in the past. I will also take actions to rectify any omissions or mistakes made by the relevant authorities or officials.’ In an attempt to dispel public perceptions that the government was prioritising a two-third majority in parliament to pass the 20th amendment he said, ‘I emphasise that our government has not entered into any political deal with parliamentarian Rishad Bathiudeen. I assure my citizens that I will not forsake the trust that they have placed in me and I will most certainly continue to work towards strengthening the built trust.’

The real problem is with the 20th amendment which is akin to the elephant in the room for the government parliamentarians. There is a strong demand from the people for a strong government that does not fail to perform like the previous government where the president and prime minister undermined each other. The current government does not suffer from the same constraint as they come from not only the same party and enjoy a two-third majority in parliament, but also the president and prime minister are from the same family. But the proposed amendment is regressive in its focus on empowering the presidency at the cost of all other state institutions, including parliament, the prime minister and ministers, and would reduce them all to a relatively powerless condition.

President Rajapaksa is held in high esteem by his colleagues in government who would not wish to oppose him and would want him to succeed in leading the country to development and national reconciliation. In handing down its determination on the 20th amendment Bill, the Supreme Court has ruled that four clauses need a referendum of the people along with a two-thirds majority in parliament unless suitably revised, while the rest can be passed by a two-thirds majority of parliament alone. Hopefully, the process of revision at the committee stage within parliament will lead to constructive changes in the 20th amendment so that it does not elevate the presidency and diminish the other institutions too much nor put too heavy a burden on the presidency that no single person can carry.