Consent is good, but sexual agency is better 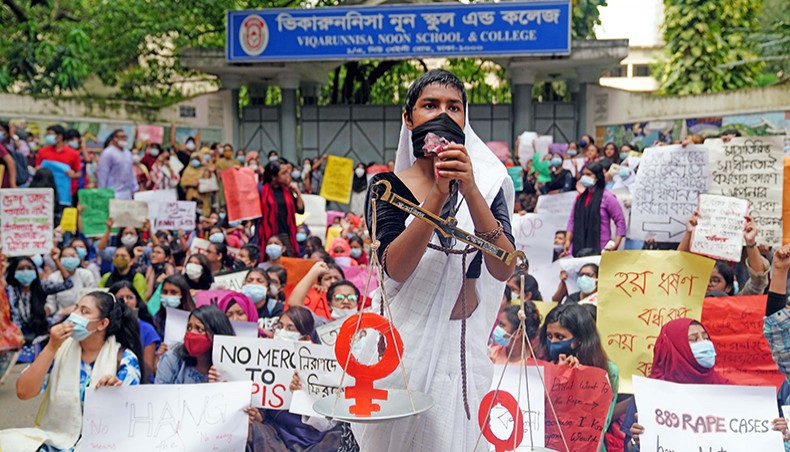 SEXUAL violence has nothing to do with sex. Violence means to harm, to violate, to harass, to humiliate other people. Sexual violence is a matter of power dynamics, not sexual dynamics. The term ‘sexual’ here refers to the means of violence, not the end. The aim of sexual violence is not to ‘have sex’ violently. It is rather to do violence with sexual means/tools. The internalised aim of the perpetrator here is to violate, to hurt, to humiliate other people, not to have sex. But why do we think it is the other way around? Why do we think that a perpetrator’s aim was to have sex, but ended up taking a violent path to fulfil it? The reason lies in our idea of sex, because we believe that the act of sex can include violence.

For me, the first step of being a woman in Bangladesh required protecting myself from sex. Growing up, I was taught that sex is a ‘man-thing’. Men love sex and I must protect myself from their lust. Later with a feminist conscience, this idea of ‘protection’ from sex has transformed into my participation in the movement against sexual violence. However, it took years for me to disassociate sex from sexual violence, and it took me another decade to understand that the other side of the coin of protesting rape was to establish our basic human right to enjoy sex. The reason for this long delay in understanding is that even within the feminist groups, resisting rape is not always connected to the fundamental sexual politics that consider women as sexual objects. Turning the table in favour of the sexual subjectivity of women and marginal sexual beings and against rape culture is the answer. Sadly, it remains undiscussed because of the social taboo.

When we protest against rape, we sometimes ignore that we protest an act where the rapist might receive pleasure of some kind by violating the victim. The ‘victim’s’/survivor’s right to enjoying/owning his/her body have been violated. So the ‘victim’/survivor is not only not-enjoying the act, s/he is hurt, harassed and violated. Thus, that act is nothing close to sex, it’s rape. In what follows, the protest against sexual violence is not just about the bodily harm and violation, it is also about our basic human right to enjoy sex. However, in rape culture, the denial of female sexual agency is so widespread and the level of sexual violence is so acute, that feminist protests have had to focus only on not-being-violated. They do not extend to address the violence of sexism and to reclaim sexual subjectivity, to reclaim the sexual pleasure and desire of women.

Moreover, to demand justice for a rape, the proof of innocence (in the name of asexuality or without any agency) of the ‘victim’/survivor is often required. This is because sexuality and innocence are constructed in a dichotomy. When we think about it deeply, the absurdity of this binary thought process becomes clear. It imagines the act of sex as inherently aggressive, masculine and sinful. Such imaginations are influenced by the sexual politics in which men-women are constructed as binary opposites, as subject-object. They came following a long trajectory of Victorian and colonial history and development of the capitalist individualism that only endorses hegemonic masculinity. In this discursive trajectory, being a woman is limited to being able to ‘respond’ to this ‘male’ sexual desire with a ‘yes’ or ‘no’. She is therefore never the subject of that act, rather the object that reacts to the act and if she enjoys sex she is considered of loose morals. To break this discursive circle of sexism, our aim should be to reclaim our sexual subjectivity that she/they were historically denied through sexual objectification.

To resist rape, we place great emphasis on ‘consent’. While this is absolutely critical for reclaiming women’s sexual agency, we need more than that. The consent discourse focuses on the response of women to men’s interest. It implies that men show interest for sex and women respond. It assumes women as auxiliary or secondary. Moreover, defining consent as simply saying ‘yes’ or ‘no’ is problematic and restrictive. It is important to emphasise that ‘no’ doesn’t mean ‘make me say yes’. ‘No’ doesn’t mean ‘maybe later, keep trying’. It is important to keep in mind that, ‘yes’ is not always ‘yes’. ‘Yes’ can be a conditional ‘yes’. ‘Yes’ can be forced too. It is therefore inadequate to understand consent with only in terms of a ‘yes’ and ‘no’. When anti-rape activists emphasise that ‘no’ means no and only ‘yes’ means yes, they tend not to consider the sexual politics behind the ‘yes’. It does not allow us to see the historical construction of the idea of sexual act, where women are expected to act in a certain way in response to men’s interest. It does not allow us to see that not every ‘yes’ can be a true expression of interest. A wilful yes requires social conditions in place for women to enjoy sexual pleasure, orgasm and her/their absolute sexual subjectivities in sexual acts. Protesting rape, therefore, needs to be extended to include questions of orgasm, sexual subjectivity and the desires of women and all marginal sexual beings.

The consent issue needs to be seen and understood as not only an act of communication, but also as an ethical act. By ethical, I am not referring to the morals of the patriarchal society where sex is seen as dangerous or harmful for women, rather the opposite. I am referring to an approach/principle that prevents someone from harming others. Here, the participants who engage in the sexual act both need to respond ethically. Consent and an ethical response are two different things. An ethical response is more than consent. To fight rape, consent is vital, but to fight rape culture, we need more — we need consent and an ethical response to the sexual act.

One of the foundations of rape culture is the objectification of women and their bodies. This form of sexism works as a handmaiden to capitalist consumerism. Living in this social structure, we also internalise this sexism. We cannot easily prevent the objectification of our bodies, but what we can do is to weaken the process by claiming our sexual subjecthood, by establishing our right to be dignified sexual beings. By reclaiming our sexual agency, we can engage in sexual relations and enjoy the act with dignity. We can do it by being the woman who has the right to express her sexual interest, not only a subject who responds to other’s interest. Only when we gather the courage to reclaim our sexual autonomy, we can win an important battle against everyday sexism and rape culture.

Nasrin Khandoker is an anthropologist, feminist, mother and is stupid enough to be optimistic even in the face of despair.