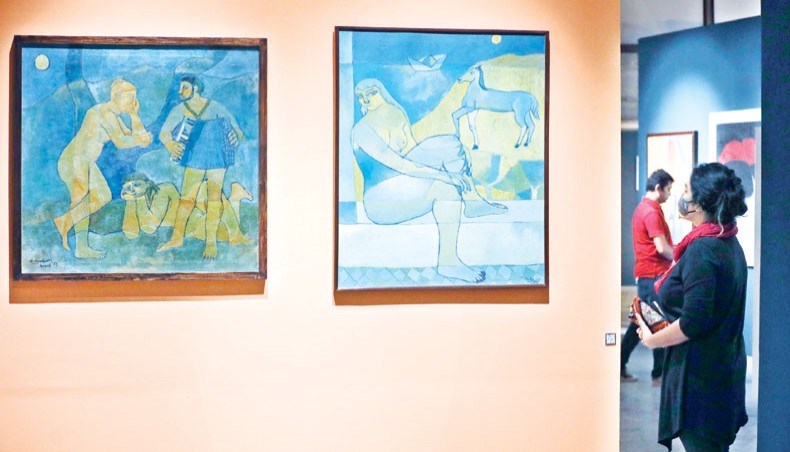 A visitor looks at Murtaja Baseer’s early oil-on-canvas works displayed at an on-going exhibition under way at  Bengal Shilpalay in Dhanmondi on Monday. — Sourav Lasker

An art exhibition focused on the late artist Murtaja Baseer’s diverse array of works creates an opportunity for the younger generation to come to an understanding of the recently deceased modern master’s contribution to art, literature and film.

The three-month-long exhibition organised by Bengal Foundation features around 150 collected works representing some of the most influential series of the master. The motley collection of his works testifies to the artist’s penchant for diverse forms of creations using oil, various methods of print, pen as well as his enthusiasm for writing poems and prose.

The painter whose life’s work is being celebrated in the newly revamped gallery once said that his research on the coins of the Sultanate of Bengal would make him immortal, if all else fail to survive the test of time.

However, the current exhibition of this Independence Award and Ekushey Padak-winning artist speaks volumes in favour of his paintings and drawings as Murtaja Baseer, the artist, had always been keen to explore both human forms and surface quality of the painting with the zeal of an avant-gardist, never stopping to explore their diverse possibilities.

The exhibition amasses paintings representing the four well-known series — ‘Wall’, ‘Epitaph for the Martyrs’, ‘Wing’ and ‘The Kalima Tayeba’. It also brings under one roof numerous drawings and prints under the heads, ‘Figurative’ and ‘Self-portrait’. Some of the most celebrated works done during the language movement of 1952 are also part of the exhibition.

The exhibition also showcases books penned by the artist, painted match boxes, catalogues of various exhibitions, a diary, the film titled ‘Nari O Nadi’, for which he wrote the script and was involved as an art director, photographs and others.

The artworks show how his enthusiasm for symbolism ran parallel to the realism that went into the drawings and woodcut prints produced during the language movement, in his early years. After liberation war, he was able to take his symbolism, which began with his Wall series in the late 1960s, to a sublime idiom dedicated to the martyrs of the war.

His forte lay in drawing and the portraits of poet Shamsur Rahman, artist Aminul Islam and others suggest that like Picasso, whom he always admired, Murtaja Baseer never gave up on life drawing. The self-portraits also make this obvious.

In many interviews the artist referred to himself as a colourist. Both Wing and The Kalima Tayeba series bring to light the artist’s enthusiasm for colour and abstract motif.

To mention a few works, a painting from the series Kalima Tayeba almost create a trammelling of the eye as broad colour swatches are employed, making the Kalima a

faint script written in shades of green, violet and blue-grey.

Woman has been one of themes that recurred in his paintings throughout his life. It is with the depiction of women that Murtaja had successfully paid attention to the social-cultural context. Among the series of sari-clad women, one exploring his wife stands out for its formal beauty and centralised composition. Often painted in the vein of icons, Murtaja Baseer’s women from the early years seem radically geometricised, though they are often accompanied by flowers, pitchers and elements referring back to a village.

‘We have organised this exhibition to give the younger generation a glimpse into Murtaja Baseer’s works. When we contacted private collectors to lend Murtaja Baseer’s works from their collections for our exhibition, they agreed right away. I urge parents to visit the exhibition along with their children,’ Luva Nahid Choudhury, director general of Bengal Foundation, told New Age.

The exhibition will remain open till January 16, 2021.