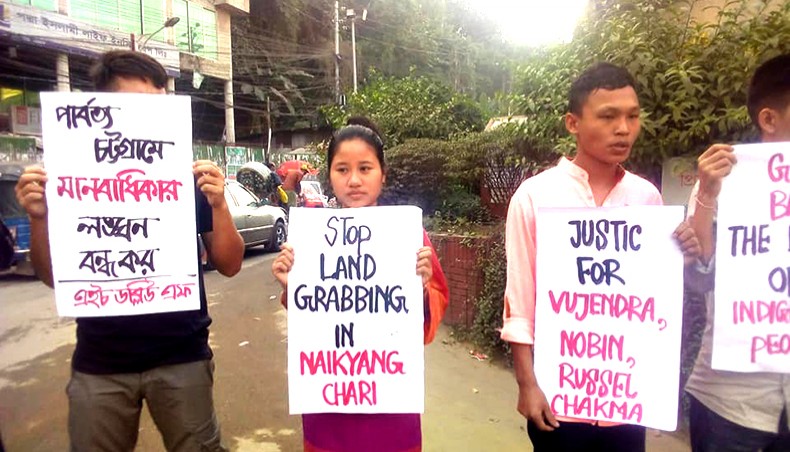 WHEN the pandemic began to unfold in Bangladesh in late March, a group of Jumma activists based in different parts of Bangladesh got together for an emergency meeting to discuss the food and health situation in the Chittagong Hill Tracts. However, even before COVID-19 could make its way into the region, another health emergency was already causing havoc there. By the end of March 2020, at least 300 children were afflicted by measles in several parts of Rangamati and Bandarban. Eight Jumma children died from a disease that is easily preventable through a vaccine. The measles outbreak, its mismanagement and lack of government accountability clearly demonstrated the lack of access to government health services in this area and was an indication of what could possibly happen if the pandemic made its way into this region.

However, another aspect of food and health security surfaced as soon as the Jumma activists began developing a food and aid distribution plan, that of the embedded discrimination in the Hill Tracts. In several places, the groups carrying food aid were stopped by officers of the local administration from handing over food aid to people in the remote areas. They were told 0 to turn their vehicles around unless they could ensure that 50 per cent of the aid would be given to settler Bengalis and 50 per cent to adibashis. The only problem with such a demand was that in some of these remote areas there were very few or no Bengalis at all.

There was no rational explanation for making up such an arbitrary rule about giving food aid in these areas, especially as many of them were organised by private individuals and not part of any government programme. The cruel optics of turning food aid vehicles around while people went hungry and needed support in these remote hilly areas also seemed to be irrelevant to the administration’s hegemonic political consideration.

I asked some of the activists whether there were any written directives from the government about this rule or any explanation or justification of it. There were none. One of the researchers who has been documenting this food aid programme laughed and told me that such arbitrary rules in the CHT are nothing new and it did not need a pandemic for these to be laid bare. Arbitrary rules, written, unwritten and made up on the spur of the moment defines how the hill tracts are managed and how Jumma bodies are governed by the state through suspicion and surveillance.

The main objective of the state has always been to keep the hill tracts in a state of a manageable conflict, i.e. a state of conflict that is just enough so things don’t get out of hand and lead to an armed rebellion, while at the same time justify the presence of policing through check posts, surveillance and militarisation.

While the period of military dictatorship during the 1980s was characterised by a media blackout in the hill tracts, such discriminatory directives have continued throughout various forms of ‘democracy’ in the country. In fact, the ‘50-50’ rule has been used before with an explicit directive from the government. In 2010, a directive from the government was circulated requiring NGOs to employ 50 per cent Bengali employees and have 50 per cent Bengali beneficiaries. Incidentally, this requirement was imposed even in areas where Bengalis do not make up 50 per cent of the population. The prime minister’s office has also issued orders asking NGOs with ‘adibashi/indigenous’ in their names to change their names (the most recent one was issued in December 2019). These directives are usually accompanied by some editorialising that refers to some form of conspiracy from Jumma activists, for example in the case of the usage of the term ‘adibashi’ the directive points out that the term does not exist in the Bangladesh constitution, and that opportunists and conspirators are trying to use international laws for the realisation of their rights. Apart from the discriminatory directives most of Bangladesh is mostly unaware of the forms of daily surveillance that Jummas must face, the arbitrary house searches and the filing of false cases against Jumma activists and the fact that to date almost no rape cases in the CHT has led to a conviction, when the rape takes place inside the CHT and the alleged rapist is a Bengali and the survivor a Jumma woman. For most, the hill tracts are just a beautiful tourist destination which must be protected from Jumma terrorists and so there is no conflict of interest in the military’s management of tourism and other administrative matters in the area. Therefore, discriminatory practices are normalised and regularised by acts that seem innocent and surveillance and militarisation is made to seem like a necessity in order to maintain security of the state and all of this is carried out with the support of public consent.

These discriminatory practices have been facilitated by the Operation Uttoron, which began to function in 2001, and gives the military powers to govern the civilian administration with impunity, to carry out arbitrary searches and arrests and financially support Bengali settlement and develop strategies to manageable level of conflict between Bengalis and Jummas and between the different Jumma political groups. Of course, discriminatory practices in the hill tracts are nothing new when a region is perpetually in a state of exception, which is conceptualised by Giorgio Agamben as a situation similar to a state of emergency where basic human rights, as understood by national or international laws, are suspended and state sovereignty stands above all laws. However, in the hill tracts, the state of exception has not only maintained an emergency-like situation but has also benefitted the economically powerful to illegally grab lands belonging to the Jumma population.

Naga lawyer and anthropologist Dolly Kikon writing about the Armed Forces Special Powers Act in the Indian northeast pointed out that states legitimise lawlessness through repressive and discriminatory laws. She argues that law does not always deliver justice and points out that it is the force of the law that gives power to carry out violence.  Just like the AFSPA in the Indian northeast, Operation Uttoron and the general military presence in administrative matters in the hill tracts has created a culture of discrimination, repression, and intimidation by using the national security lens to manage the Jumma population there. The violence and structural discrimination in the hill tracts are protected by Operation Uttaran and military involvement in the civil administration in the hill tracts, and unless we critically question the legitimacy, necessity and parameters of this military presence the situation in the hill tracts will always remain in this unresolved managed conflict-like situation and a group of very powerful individuals will continue to economically and politically benefit from it.