Who lives, who dies, who decides? 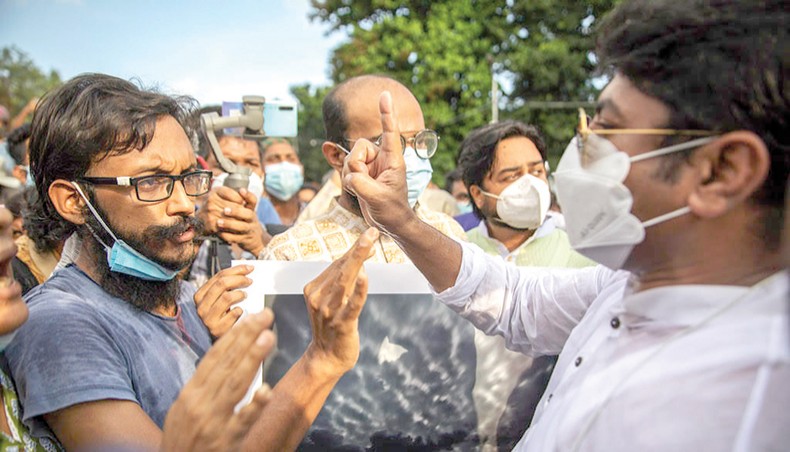 The Councillor of 26 No Ward of Dhaka South City Corporation, Mr Hasibur Rahman Manik who led a ruling party procession to the venue to disrupt a peaceful performance by Drik Picture Library at Raju Bhaskorjo at the Dhaka University on 4th September 2020, Drik’s 31st Anniversary. — Habibul Haque/Drik

‘PAPA, are you crying?’ were the last words popular Awami League councillor Akramul Haque’s daughter had said to him. The family then heard the gunshots. The groan. Then more shots. The sounds, recorded on their phone, and later released to the media, reverberated across paddy fields, along the undulating Chittagong Hill Tracts, across swampy marshlands, on the waves of the Padma and Jamuna, in fancy apartments of Gulshan and Baridhara, and now in the cantonment. It reaffirmed what we all knew, and what the government has consistently denied. That it was the law enforcing agencies of our country, rather than the courts, who decide whether a citizen should live or die.

Two months ago, Major (retired) Rashed Sinha was ‘crossfired’ in Cox’s Bazar Marine Drive, locally known as the ‘Death Drive’, where over one-fourth of the ‘crossfires’ across the country had taken place. Later, the chief of army staff assured all that there would be no further ‘crossfires’ [of military personnel, in service, or retired]. But what about ordinary citizens? Despite the clear message from the authorities, ‘crossfire’ is simply too convenient and too profitable. As far as the government is concerned, it is here to stay.

I am no stranger to death. I came across it in 1971. In the many disasters I’ve covered. In the political clashes I’ve witnessed. Drik’s team of Fariha Karim, Tanzim Wahab and Momena Jalil had researched over 600 cases of ‘crossfire’ in 2010, meticulously noting locations, time of death and mode of killing. But it is the more recent killing of Akramul Haque that haunts me the most.

The photograph, from Akram’s family album, of a proud dad with his doting daughters, superimposed on the Google Earth map of the notorious ‘Marine Drive’, encapsulates a nation’s pain like no other. It’s very different from the other photographs in my series on crossfire deaths, photographs which the Peruvian curator Jorge Villacorta had described as ‘nocturnal viewings in a sleepless night’.

The attempt of the first exhibition (Crossfire, 2010) had been to get under the skin. To walk those cold streets. To hear the cries, see terror in the eyes. To sit quietly with a family beside a cold corpse. Every photograph had been based on in-depth research. On case studies. On verifiable facts. A fragment of the story had been used to suggest the whole. A quiet metaphor for the screaming truth.

When the exhibition was to be opened on March 22, 2010, the government had sent riot police to close down Drik’s gallery. India’s legendary writer and activist Mahasweta Devi who had come over from Kolkata, and Nurul Kabir, one editor the government has yet failed to tame, opened the show in the street. Mahasweta symbolically removed my handcuffs to mark the opening. Later, I had interviewed one of the policemen, asking him why they had closed down an exhibit that showed things as harmless as an empty paddy field. The policeman was also a father. ‘It was the word ‘crossfire’,’ he said, ‘even my three-year-old daughter knows what that means.’ Despite the spin and the propaganda, the word is familiar to all Bangladeshis. ‘Papa, are you crying’ touches each one of us.

In 2010 we had geo-tagged the heart rending ‘crossfire’ incidents over the years on to a Google Earth map.  The map included the case studies. Now that there are over 4,000 cases, it is just too difficult to keep track.

‘No person shall be deprived of life or personal liberty save in accordance with law’ says Article 32, Part III, on fundamental rights in the Constitution of Bangladesh. The Supreme Court judge, Nazrul Islam Chowdhury had said, ‘It will be suicidal for the nation and the society to allow the law enforcement agencies to decide who should be killed on criminal charges.’

The 2008 election pledge of the Awami League had struck a chord. To ‘stop extrajudicial killing, bring the perpetrators to justice, and establish rule of law and human rights’ was part of a campaign promise that led to a landslide victory.

Given that extrajudicial killings have been going on in this country since 1972, soon after the emergence of Bangladesh, this suicidal attempt appears to be in the form of a slow anguished self-asphyxiation, but it is suicide all the same. In 2010, we had filed a writ petition at the High Court, challenging the legality of the closure of our exhibition. The government, facing censure, withdrew the police a day before the show had been scheduled to close. Whether the courts would show similar courage today is an open question.

Ten years on, with ‘crossfire’ unabated, and the killings increasingly more brazen, we decided another viewing of the show was needed. This time we ourselves chose the streets. There were two additions to the original set of images, representing the killings of Akramul Haque and Major (rtd) Rashed Sinha. It was to be at Shahbag on September 4, the thirty first anniversary of Drik. Shortly before our pre-announced event was to start, we heard that a large pro-government group, bolstered by over a hundred policemen, had already occupied Shahbag. We relocated instead to nearby Raju Bhaskorjo at the Dhaka University. We couldn’t know then whether their programme had been a deliberate act to disrupt ours. When they came over in droves to physically attack our performers, attempting to snatch away our banner and microphone and rip up our photographs, the intention became obvious. The spurious argument of demanding justice for the 21st August grenade attack where judgement had already been issued and 19 given the death sentence, had no relevance. It was simply a ruse. No way would a protest against ‘crossfire’ be tolerated. That the attack on us could happen in full view of the police was telling.

We stood our ground despite being vastly outnumbered and the visible threat, but felt the ruckus would not be a fitting venue for the last part of our programme, a minute’s silence to honour the ‘crossfired’ dead. We moved to a quieter place, outside Chobir Haat, to pay our respects.

Professionals belonging to the international media posted their take on social media:

‘If you want to see how art and activism intersect, I thoroughly recommend you watch this live stream of Drik’s performance to highlight Crossfire (extra-judicial) killings in Bangladesh. So brave and powerful – unforgettable.’ Rachel Spence, Art Writer, Financial Times.

‘An exhibition like no other. It was perhaps the best photo exhibition I have witnessed in my life.’ Shafiqul Alam, Bureau Chief, Dhaka. AFP

Local media was hesitant in the beginning with significant omissions, but after the widespread public protests, they too felt empowered and soon the attackers were on the defensive.

The Daily Star commented in an editorial ‘This is not an incident that can be easily ignored, and it reveals some disturbing truths about the state of our democracy. The fact that the police allegedly played the role of silent spectators during the whole incident is equally distressing. Why did the police allow such an unprovoked attack on peaceful protests? Since when do ruling party supporters have the authority to distinguish between the significance of different cases that are under the jurisdiction of the legal system? Do any and all supporters of the ruling party have a free pass in abusing their power with impunity? Can we claim to live in a democracy if protesters do not even have the right to peacefully stand together against an issue as serious as extrajudicial killings?’

Then came the letter. It was copied to the Shahbag Thana police.

Dhaka University is no longer the seat of resistance, or intellectual practice it once had been. Tenure is now decided on party loyalties rather than on merit. But would a proctor have really objected to an art event protesting against extra-judicial killings, especially when events of significantly less importance had been regularly allowed, and have been allowed since? It was however, the mis-spelling of the word University (`Univesity’ in the letterhead) that worried me. A letterhead is a sign of one’s identity. Surely this prestigious institution, known as the ‘Oxford of the East’, could not have been using a mis-spelt letterhead.

The production of the letterhead would have gone through a rigorous process of design, approval and vetting. There would have been a committee that signed off on all official stationery. Even if all that had failed, the person signing the letter, must have noticed. Apparently not. It was later confirmed by the proctor’s office that the letter was indeed genuine. So much for our ‘Oxford of the East’.

The proctor had expressed concern about the health issue. The art event had indeed been planned keeping distancing guidelines in mind. It was the attack against the protest, led by Councillor of Ward 26 of Dhaka South City Corporation, Mr. Hasibur Rahman Manik with a much larger and aggressive group, that posed the health risk. Why the proctor sent a copy of his letter to Drik also to the local police station, but failed to issue a similar letter to Manik, remains a mystery.

Is the Dhaka University with its once proud tradition of conscientious dissent, now a supporter of ‘crossfire’? Are proctorial ears deaf to a daughter’s last words ‘Papa, are you crying?’ l