All empowered with nowhere to go 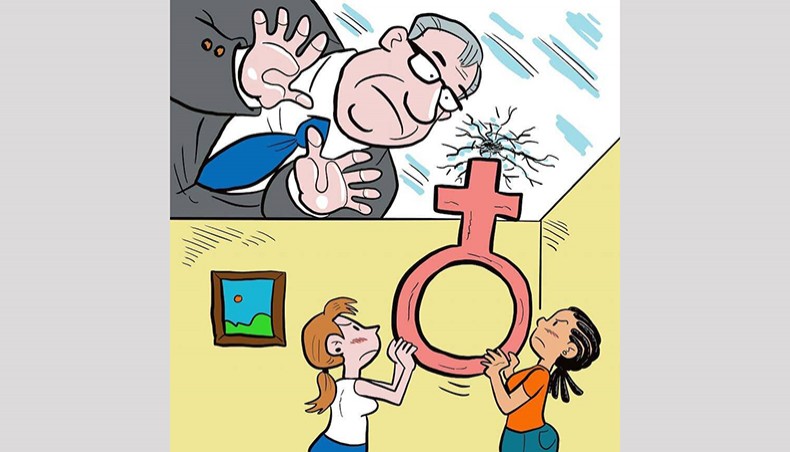 ADVOCATING for the rights of women is a dream job that pushes many young women like me to spend years acquiring the academic and professional experience necessary to enter the development sector. As development activists working with women at the grassroots level, we champion women’s empowerment and yet, within development organisations, we often find that our concerns about our visibility, safety, and professional development as employees are routinely dismissed. While professional women face similar challenges in other sectors too, the cognitive dissonance for women in development organisations is particularly acute. The development sector promises to empower women, but it also silences, penalises, and disempowers some of the best and brightest minds within its very own ranks. Empowered women enter the development sector with great expectations only to find too many willing to sacrifice them at the altar of toxic masculinity, misogyny and organisational hierarchy.

IN SOME organisations, some male colleagues tend to show little respect for their female colleagues, especially those whose confidence and expertise threaten them. Women are often interrupted and mansplained by colleagues with patriarchal mindset. Some colleagues fail to integrate input from women with proper credit. There are many instances when women are asked to do the work of their colleagues and then are not properly credited afterwards.

Women are often forced to choose between standing up for themselves and putting their job at risk. While men are praised for speaking up, women are labeled as ‘bossy’ or ‘bitchy’ for being assertive. If a woman has difficulty working with men, she is considered incompetent. If she ever bursts out in anger, she is blamed for not being able to control her emotions. If she tries to set boundaries, her commitment to professionalism is questioned.

Learning to set and maintain boundaries is a crucial professional skill, but setting these boundaries is not easy, as most people were not taught to develop this skill at home or at school. Therefore, when a woman endeavours to set boundaries for herself, it results in a challenge to the system. As a result, her efforts trigger further criticism, abuse, and ostracisation. True to the ‘suck-up, kick-down’ model, most people would not behave the same way with men/other men, women in positions of power, or foreign female colleagues.

While professional women regardless of marital status encounter intrusions into their personal life, single women face a particular set of challenges. When a woman is single, co-workers often disparage her marital status and make inappropriate suggestions and jokes about her personal life. It is common for male colleagues to call women after work hours for no good reason and to address them in an unprofessional tone. Some managers also tend to assign more work to be completed outside regular work hours to single women, while ignoring their complaints about unprofessional behaviour from colleagues. As such, management tends to reinforce the power imbalances at development organisations, as I will discuss in the next section.

Management as an enabler

PERPETRATORS are often defended by senior managers and human resources, while women who speak out are branded as ‘trouble’ and sometimes even asked to leave the organisation. Many organisations have set up mechanisms and guidelines for compliance purposes, but have failed to create safe working environments for all employees.

While it is fairly common to find a woman as the lead of a gender/women’s rights team within a development organisation, very few women hold actual leadership or managerial positions in organisations claiming to be ‘women focused.’ Women are often passed over for a promotion in favour of a less qualified man. Management will sometimes recruit a man from outside the organisation, rather than promoting qualified women from within the organisation.

Paradoxically, female development practitioners who work to support women and girls’ empowerment around the world, generally work, day in and day out, to implement decisions made mostly by their supervisors. Women who excel in their jobs are often considered ‘foot soldiers.’ Typically, these women have little to no control over decision-making, but are expected to work tirelessly and passionately to serve the organisation. Usually these women find themselves in the lowest levels of organisational hierarchy in spite of their qualifications and experience. Taking a broader view, these organisations reflect society at large, where higher-status group members oppress women with lower status and exploit them for their interests, without providing them due credit or compensation. When women do secure a position of leadership, they often encounter men who find it difficult to respect their authority.

PATRIARCHAL management style reinforces existing misperceptions that women are not as capable as men in society. This mindset pushes even highly qualified women to opt for silence, second-guess their own ideas, and avoid confrontation for fear of making matters worse. It has been normalised for women to work in environments that marginalise them. Within this toxic environment women lose their confidence and shy away from taking on new challenges and taking initiative.

Women’s diminished social position, intersectionality, and different external variables make them more vulnerable to the internalisation of negative stereotypes. When this internalisation becomes chronic, it dominates their self-definition. Continuous scrutinisation and judgement by others and oneself impact women’s self-esteem adversely. This eventually undermines their ability to negotiate their career and life choices. Women are therefore caught in a vicious cycle of oppression for life.

Tragically, if a female leader espouses a patriarchal mindset, she will serve as an instrument in the perpetuation of patriarchy. This is why we sometimes see women in leadership positions telling women to compromise, adapt, and work harder, rather than requiring institutional changes and holding men accountable to professional standards so that empowered women can thrive in the workplace.

A WORK environment that enables unprofessional behaviour, blurs boundaries, tolerates plagiarism, and excuses harassment is not good for anyone, regardless of gender. To improve the existing situation, organisations that claim a commitment to women’s empowerment, whether motivated by conviction or funding criteria, need to recognise and address toxic masculinity in the workplace. They need to re-define ‘empowerment’ and take steps to prevent the disillusionment and disempowerment of the strong, qualified women who join their organisations. A development organisation cannot be expected to effectively address the needs of the people in need if they disempower their own female employees. The development sector needs to invest in all employees to develop their capacity to effectuate positive change. Moreover, women also need to continue to work together to fight against the perpetuation of gender-stereotypes and discrimination based on patriarchal and oppressive cultural norms. Challenging the system is not easy, especially from a lower position in the organisational ladder, given the associated professional and financial risks. Even so, there is no option but to unite and stand up for ourselves, or else the ripple effect of our disempowerment will amplify existing power imbalances. We must keep fighting to ensure gender justice for ourselves, while we work to secure empowerment for others.

Faria Rashid is a development activist focusing on women’s rights, gender equity, refugee rights and communications. She is a free-spirited, fierce and flamboyant soul. Faria is a solo traveller wandering and wondering in this amusing planet.