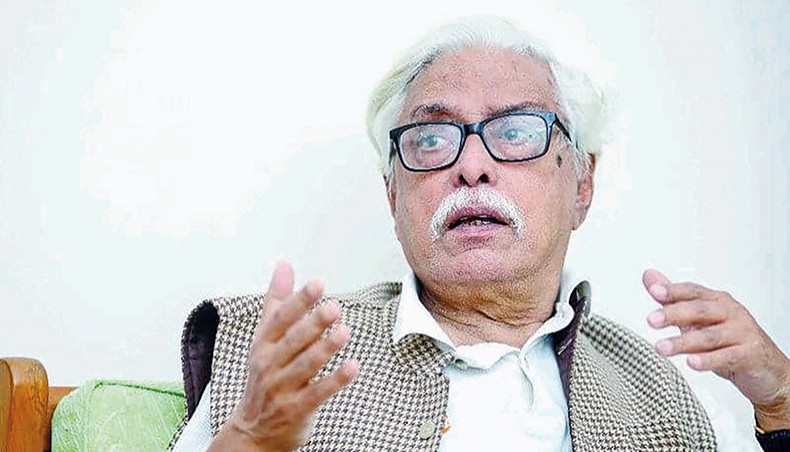 Ekushey Padak-winning writer Rashid Haider passed away on Tuesday morning at his daughter’s residence on Fuller Road on Dhaka University campus at the age of 79.

He had been suffering from age-related diseases.

‘My father had been suffering from age-related diseases. His health condition deteriorated two days ago. He passed away at my residence at 10:00am on Tuesday,’ Shaonti Haider, Rashid Haider’s daughter, told New Age.

His first namaz-e-janaza was held at the Dhaka University central mosque after zuhr prayers. He was buried in his wife’s grave at Azimpur graveyard.

Prominent writers and poets have expressed deep shock at the death of Rashid Haider.

Writer Selina Hossain said, ‘I had good relations with him when he worked at Bangla Academy. He was a straight forward person who didn’t like talking about someone behind their back. He also disliked communalism.’

‘He tried to portray the plight of the marginalised people and sufferings of the middle class in society. He had great respect for the history and the culture of our country. He will live on through his creations,’ added Selina Hossain.

Bangla Academy director general poet Habibullah Siraji said, ‘Rashid Haider was one of the prominent litterateurs of our country. He had a multifaceted personality and held many important positions during his lifetime. He worked as a director of Bangla Academy for a long time. Later, he served as the director of National Book Centre and executive director of Nazrul Institute.’

Poet Rubi Rahman said, ‘I had known him for a long time. He had been suffering with age-related complications. I often visited his home and he also came to my house several times. He enriched our literary arena with his novels and liberation war-based works. His works need to be promoted among the younger generation. May his departed soul rest in peace.’

Rashid Haider was born on July 15 in 1941 in the village of Dohapara in Pabna. He had written at around 70 books. His notable works are Smriti 71, Shahid Buddhijibi Koshgrantha, Muktijuddher Nirbachita Galpa and others.