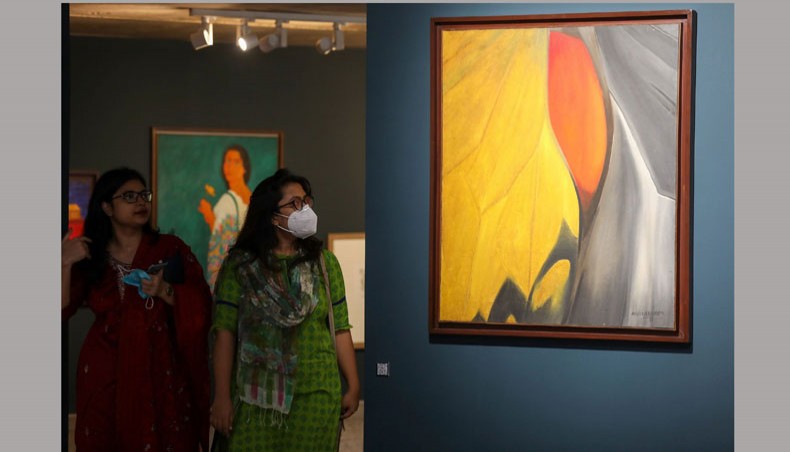 Visitors look at artworks by Murtaja Baseer at an exhibition at Bengal Shilpalay in the capital’s Dhanmondi on Monday. — Sourav Lasker

An art exhibition focused on the late Independence and Ekushey Padak-winning artist Murtaja Baseer’s diverse array of works attempts to showcase the recently deceased modern master to the younger generation.

The exhibition titled ‘Baseer: An Eloquent Mind’ is under way at Quamrul Hassan Exhibition Hall Level 2, Bengal Shilpalay in the capital’s Dhanmondi.

The three-month long exhibition, which commenced on October 12, features around 150 collected works representing some of the most influential series of the master.  The works testify to the artist’s penchant for diverse forms exploring oil, photography, lithography, acrylic, ink, woodcut, among others.

The exhibition amasses paintings representing Murtaja Baseer’s the four well-known series — ‘Wall’, ‘Epitaph for the Martyrs’, ‘Wing’ and ‘The Kalima Tayeba. It also brings under one roof numerous drawings and prints under the heads, ‘Figurative’ and ‘Self-portrait’. Some of the most celebrated works done during the language movement of 1952 are also part of the exhibition.

The exhibition also showcases books penned by the artist, painted match boxes, catalogues of various exhibitions, a dairy, the film titled Nari O Nadi, for which he wrote the script and was involved as an art director, a commemorative art note Tk 40 marking the 40 years founding anniversary of Bangladesh, photographs of terracotta works he documented as part of his research on temples in West Bengal.

The exhibition will remain open till January 16, 2021.