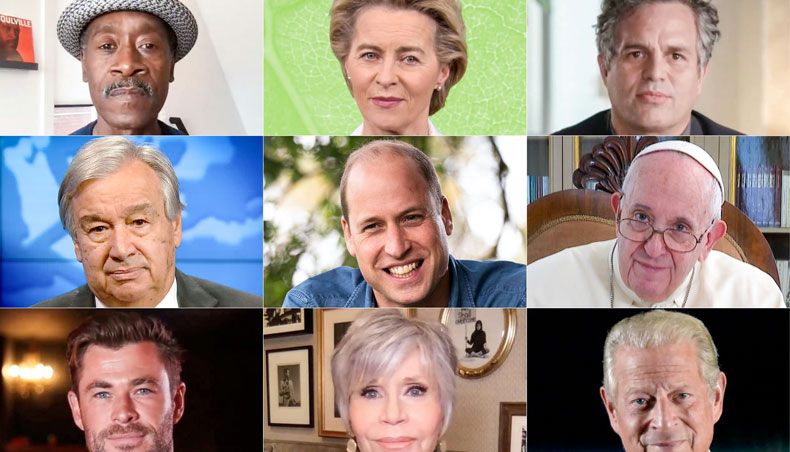 Celebrities from filmmaker Ava DuVernay to Britain’s Prince William to the Pope himself issued powerful calls on Saturday calling for people to mobilise and unify to confront the climate crisis.

Here are some quotes from the free, streamed TED event:

‘The Earth must be worked and nursed, cultivated and protected. We cannot continue to squeeze it like an orange.’ — Pope Francis

‘I want to cast my vote in favour of the planet.’— Filmmaker Ava DuVernay

‘Young people no longer believe that change is too difficult. They believe that the climate crisis and the threat to our biodiversity deserve our full attention and ambition.’— Prince William

‘We let capitalism morph into something monstrous. The truth is business is screwed if we don’t fix climate change.’ — US economist Rebecca Henderson

‘The fossil fuel industry knows how to stop global warming, but they are waiting for someone else to pay and nobody is calling them out on it.’— Oxford professor and climate science scholar Myles Allen

‘What happens in the next 10 years will likely determine the state of the planet we hand over for future generations. Our children have every right to be alarmed.’— Potsdam Institute for Climate Impact Research director Johan Rockstrom

‘We must make sure each country has a plan to zero emissions. Billions of people around the world are already suffering from our failure to act.’— UN secretary general Antonio Guterres

‘We can and need to be a part of this movement: eat local food, ride your bike more, understand what you are spending your money on, vote for people who share our vision. Let’s change the world. — Music star Prince Royce

‘Black people breathe in the most toxic air relative to the general population, and it is people of color who are more likely to suffer in the climate crisis. It gives all new meaning to the Black Lives Matter slogan ‘I can’t breathe.’’— British parliament member David Lammy

‘We can do nothing and hope the problem goes away; we can despair and fall into paralysis, or we can become stubborn optimists and rise to the challenge.’— Christiana Figueres, former executive secretary of the United Nations Framework Convention on Climate Change

‘California uses more electricity playing video games than the entire country of Senegal uses overall. There is a mind-blowing gap between the energy haves and the energy have-nots.’— Kenyan energy researcher Rose Mutiso

‘What about committing to never buying a car or two-wheeler again with an internal combustion engine?’— Climate activist Xiye Bastida

‘Tree restoration is not a silver bullet, there is no silver bullet. It is part the solution.’— Ecology professor Thomas Crowther

‘The good news is it is now clearly cheaper to save the planet than to ruin it. The bad news is we are running out of time.’— Prominent Silicon Valley investor John Doerr