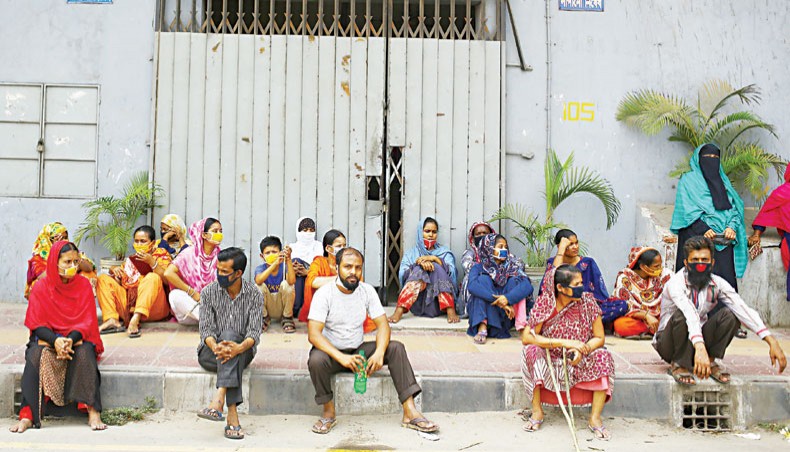 A file photo shows workers protesting against non-payment of wages in front of a readymade garment factory in the capital on April 16. The government has framed guidelines, allowing the export-oriented readymade garment and leather and footwear sectors workers, who were terminated due to the coronavirus outbreak in the country, to receive Tk 3,000 a month for three months.— New Age photo

The government has framed guidelines, allowing the export-oriented readymade garment and leather and footwear sectors workers, who were terminated due to the coronavirus outbreak in the country, to receive Tk 3,000 a month for three months.

The labour ministry on Wednesday through a gazette notification issued the guidelines named social safety net implementation guidelines 2020 for the jobless workers of export-oriented RMG and leather products and footwear sector.

The government is going to implement the social safety net programme for the jobless workers with the funding from the European Union and the German government.

The guidelines have set an implementation committee headed by director general of the Department of Labour and said that the programme would be implemented under the DoL with the active support from the factory owners.

Labour rights groups, however, have opposed the committee and demanded an inclusion of workers’ representatives to the committee.

According to the guidelines, the workers who were employed in any RMG or leather goods and footwear factory up to February 2020 and now remained jobless due to accident or physical illness, termination or factory lay-off and permanent closure of factory, would be beneficiaries of the social safety net programme.

The guidelines said that many workers of RMG and leather goods and footwear sector in the country were passing their days in a severe hardship as exports declined in the EU and North America and factory owners were forced to lay off their units due to the coronavirus outbreak.

The government with the support of the EU and the Federal German government has taken the initiative to provide necessary support to the workers of the export sectors, it said.

The guidelines said the respective factories would prepare the primary list of jobless workers and the trade bodies would scrutinise the list and would sent to the DoL.

The DoL would place it before the meeting of the implementation committee for the final approval.

The beneficiaries would receive the amount through bank accounts or mobile accounts without any charge.

‘It is a grave concern that these policies have been formulated without any consultation with the IBC who is the genuine representatives of the workers especially the RMG sector workers. We have serious concerns on the way it was decided to make the list of the workers and we have fears that the real jobless workers would be deprived of getting benefit from it,’ IndustriALL Bangladesh Council said in a letter to state minister for labour Monnujan Sufian on October 4.

Before the guidelines were published, the IBC requested the state minister to organise a consultation meeting with the labour leaders in this regard.

The IBC also claimed that the fund initiatives were the outcome of its global campaign led by IndustriALL Global Union, which had negotiated the ‘Call to Action: COVID-19: Action in the Global Garment Industry’ with the International Organisation of Employers along with the International  Trade Union Confederation and a number of apparel brands endorsed it who sourced their products from Bangladesh.

The EU in mid-April announced the mobilisation of a fund worth over 334 million euros for the fight against COVID-19 outbreak and its impact on Bangladesh.

Although the EU announced the support for the jobless workers in April, the finalisation of the utilisation modalities of the fund has taken five months, sector people said.