A legal review on ‘tarnishing the country’s image’ 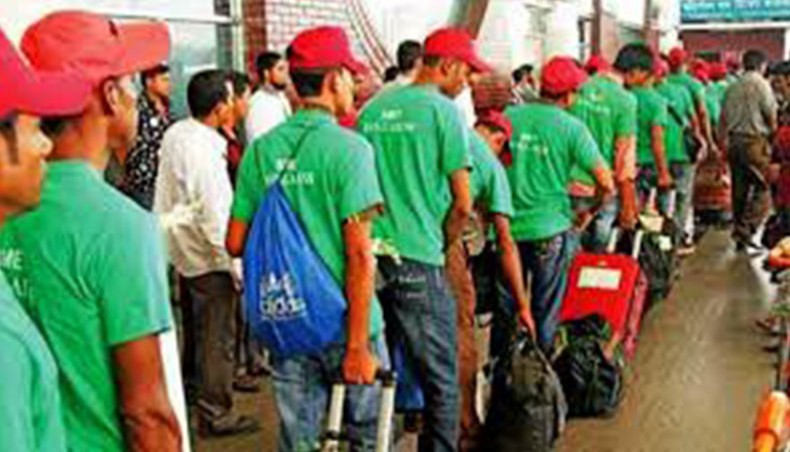 It is ironic and regretful at the same time that how we are incapable to come forward to help our expatriate workers who are exploited, cheated, beaten, tortured, thrown out of jobs, or never given the job that was promised or at the level of pay promised in overseas. Instead, the law enforcement agencies tend to harass them when they return to their soil after indescribable hardship. Nafiul Alam Shupto writes about the arrests and detention of 81 Bangladeshi migrant workers in September after they arrived in Bangladesh from Vietnam having been trafficked

THE arbitrary arrests and detention of 81 Bangladeshi migrant workers in September after they arrived in Bangladesh from Vietnam having been trafficked brings to a total of more than 300 Bangladeshi workers arrested and detained upon their return from various countries since May 2020.

They were arrested under section 54 of the Code of Criminal Procedure, which allows the police to arrest someone based on having ‘reasonable suspicion’ that they may be involved in the act of offence outside Bangladesh. Specifically, the police have claimed that the expatriate workers have tarnished the country’s image abroad.

To limit the abusive and colourable exercise of power by the police officers, in the milestone judgment of Bangladesh Legal Aid and Services Trust vs Bangladesh (55 DLR 363), the honourable court set the ratio that no person can be arrested or detained on the ground of ‘reasonable suspicion’ under section 54 of the Code.

Furthermore, the court issued 15 directions to amend the arbitrary provisions of law. Subsequently, an appeal was filed against the High Court verdict by then four-party alliance government in Bangladesh vs BLAST case reported in 69 DLR AD 63.

Nonetheless, the appellate court upheld the HC verdict in 2016 and formulated additional guidelines for law enforcement agencies and the judges and magistrates of the subordinate courts.

Needless to say that, a broad power has been given to a police officer to arrest a person out of suspicion under section 54. According to the Appellate Division’s judgment, section 54 was included in the code by the colonial rulers, and this provision cannot co-exist with part three of the constitution which guarantees fundamental rights of the citizen.

A police officer should not exercise his arrest power based on his whims and caprice merely saying that he has received information of his being involved in a cognisable offence. He is required to exercise his power depending upon the nature of the information, the seriousness of the offence, and the circumstance unfurled in the complaint and after an investigation based on information or complaint.

To make the point clear, the police officer shall not exercise power arbitrarily violating the dignity, honour, liberty, and fundamental rights of a citizen. These rights are inherent and inalienable and enshrined in articles 32 and 33 of the constitution so that no one can curtail the same. These rights are required to be scrupulously protected and safeguarded because the effective enforcement of fundamental rights will prevail over subordinate laws.

Article 111 of the constitution provides that the law declared by the Appellate Division shall be binding on the High Court Division and the law declared by either division shall be binding on all subordinate courts. Under this article, the Supreme Court’s judgment, so far as it settles a point of law, is a declaration for the nation as to what the law is. The article recognises that legislative modification of laws is bound to be confined to significant changes under current conditions, and gradual and orderly development can only be accomplished by judicial interpretation.

Tahera Nargis vs Shamsur Rahman, (41 DLR 508, 512) case suggests, no instrument, circular, direction, notification, advice, or other instruments of any kind issued by any ministry or any department of the government which has the effect of staying, postponing, delaying, thwarting or superseding order of the Supreme Court is binding on the functionaries of the country.

Thus, it is apparent that Bangladesh’s national legislation acknowledges the supremacy of The Apex Court’s decision. It has the authority to issue directions and make recommendations regarding the amendment of the law to uphold the rule of law and act as guardian of the constitution to safeguard its oaths.

Unfortunately, neither the police nor the magistrates have taken into account the provisions mentioned earlier and precedents in the arrest and detention of the 300 migrant workers, which they are bound to follow according to the land’s supreme law. These arrests and detentions have no constitutional basis and can be termed as unconstitutional without any further discussion. From a common man’s perspective, there should not be any excuses of ignorance from the magistrates. Moreover, it is the responsibility of the magistrate that the Supreme Court’s order is implemented accordingly.

The preamble of our constitution says that it shall be a fundamental aim of the state to realise through the democratic process a socialist society, a society free from exploitation in which the rule of law, fundamental human rights and freedom, equality, and justice, political, economic and social, will be secured for all the citizens.

In AT Mridha vs State 25 DLR 353, justice Badrul Haider Chowdhury echoed the fundamental aim of this country in the following language, ‘To build up an egalitarian society for which the youth made the tremendous sacrifice of this country in the national liberation movement, the constitution emphasises for building up a society free from exploitation of man by a man so that people may find the meaning of life…’ That being mentioned, it is now ironic and regretful at the same time that how we are incapable to come forward to help our expatriate workers who are exploited, cheated, beaten, tortured, thrown out of jobs, or never given the job that was promised or at the level of pay promised in overseas. Instead, we tend to harass them when they return to their soil after indescribable hardship.

Amid the COVID-19 crisis, when we were about to face the worst downturns, the migrant workers’ inward remittance flow kept our economy alive. Instead of acknowledging the contributions of our remittance heroes, we made them accountable for tarnishing our country’s image on vague suspicion. This clearly illustrates how ungrateful we are as a nation. Therefore, injustice should come to an end at any cost.

Nafiul Alam Shupto is a trainee lawyer and currently working as an intern at The Legal Circle.