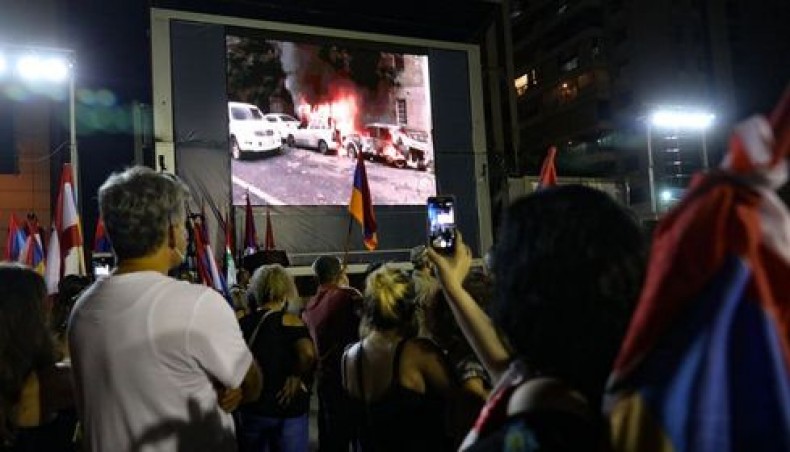 Lebanese of Armenian origin watch images of the war in Nagorno-Karabakh during a rally organised by the Tashnak party, in support of the Armenians of Nagorno-Karabakh, in the capital Beirut’s eastern suburban neighbourhood of Bourj Hamoud, on October 9, 2020. — AFP photo

Armenia and Azerbaijan agreed on Saturday to a ceasefire and to begin ‘substantive talks’ over the breakaway region of Nagorno-Karabakh after nearly two weeks of fierce clashes.

Bitter fighting in the central Asian region had claimed hundreds of lives, forced thousands to flee, and stirred fears of a full-blown war that could suck in regional powers Turkey and Russia.

Speaking after 11 hours of Moscow-mediated talks between Armenia and Azerbaijan, Russian foreign minister Sergei Lavrov said that the warring sides had agreed to a ceasefire from ‘12 hours 00 minutes on October 10 on humanitarian grounds.’

It was not immediately clear whether the pause in fighting would come into effect at noon in Moscow or the local time in Karabakh.

During the ceasefire — mediated by the International Committee of the Red Cross — the parties will exchange bodies and prisoners, Lavrov said, reading from a statement.

‘Concrete parameters of the ceasefire will be agreed separately,’ the statement added.

Russia’s top diplomat also said that Armenia and Azerbaijan agreed to start negotiating a peaceful solution to the territorial dispute.

‘Azerbaijan and Armenia begin substantive negotiations with the purpose of achieving a peaceful settlement as soon as possible,’ Lavrov told reporters, adding that such talks would be mediated by France, Russia and the US.

Renewed fighting over Karabakh — an ethnic Armenian region of Azerbaijan that broke from Baku’s control in a devastating war in the early 1990s — had claimed some 400 lives and forced thousands of people from their homes.

The heavy clashes erupted late last month, with both sides blaming the other for the biggest outbreak in violence since a 1994 ceasefire left the status of Karabakh in limbo.

Azerbaijani president Ilham Aliyev, who had repeatedly vowed to use his military to retake the breakaway province, said earlier that the talks represented a historic opportunity for Armenia.

‘We are giving Armenia a chance to settle the conflict peacefully,’ he said, adding, ‘This is their last chance.’

Armenia’s prime minister Nikol Pashinyan said that his country was ‘ready for the resumption of the peace process’ led by international brokers.

Shelling started again in Stepanakert, the provincial capital of Karabakh, where an AFP journalist heard several explosions and saw the remains of a rocket in a crater next to a cemetery for dead soldiers.

A spokesman for the Armenian defence ministry told reporters on Friday that fighting continued despite the negotiations in Moscow.

The region’s declaration of independence had not been recognised by any country — even Armenia — and the international community regarded it as part of Azerbaijan.

The return of fighting had stoked fears in the West of a full-blown war embroiling Turkey, which strongly backed Azerbaijan, and Russia, which had a military treaty with Armenia.

Discussions in Moscow, Azerbaijan and Armenia’s first high-level talks since the fighting broke out took place after Putin called for an end to hostilities and invited the two nations’ foreign ministers to the city.

Putin’s announcement came shortly after mediators from France, Russia and the US — known as the ‘Minsk Group’ — launched efforts in Geneva to end the latest flare-up.

The group had sought a solution to the Karabakh conflict for decades but had failed to stop sporadic outbreaks of fighting.

Negotiations in Geneva went ahead without Armenia, which refused to participate while the fighting was ongoing, and there were no public statements following the closed-door talks.

Since the conflict restarted both sides had accused the other of shelling areas populated by civilians and thousands of people had been displaced by the clashes.

Stepanakert was dotted with damaged buildings and unexploded ordnance following days of shelling. AFP journalists had also witnessed destruction in villages in Azerbaijan near the front line.

Armenia accused Azerbaijan on Thursday of hitting the Ghazanchetsots (Holy Saviour) Cathedral leaving a gaping hole in its roof and several journalists injured.

Armenia’s rights ombudsman Artak Beglaryan told AFP this week that the fighting had displaced around half of Karabakh’s 140,000 residents and forced some 90 per cent of its women and children from their homes.

Dozens of civilians had been confirmed killed and the Armenian side had acknowledged 350 military deaths, while Azerbaijan had not admitted to any fatalities among its troops.